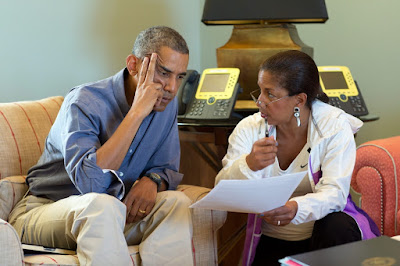 OK Barry, I risk going to prison again for you,
and you hide like a priss again behind a woman.


There is something interesting in the mind of Obama centering on the meeting that Susan Rice as NSA Director was included in, on January 5th, 2017 AD in the year of our Lord, in which Birther Hussein, Vice President Joe Biden, FBI Director James Comey and Deputy Attorney General Sally Yates, convened a meeting not centered on the MI6 Steele fake dossier, but as Rice's attorney states, centered on Russian inroads in the center of which was General Michael Flynn.

The meeting centered on not sharing certain information with General Flynn concerning the Russians.

In this meeting the DOJ and the FBI are inquired of by Birther Hussein in how to proceed. Remember in the Rice memo to herself, that it was stipulated that only legal actions were what Obama's image stressed.

It was then 15 days later, that the White House Counsel advised that NSA Director Susan Rice would create a permanent record of this meeting.
Rice's attorney states Rice was not briefed on FISA or the existence of the FBI investigation, which would be Crossfire Hurricane.

The permanent record is important in this, as Rice's memo is a COVER YOUR ASS for Obama in stating that he only directed LEGAL actions against Donald Trump and his campaign. That is important in this as in hindsight a clearer picture of what was taking place has emerged.

There is a puzzling disclaimer in the  attorney's response, in she states that Rice's memo is time stamped incorrect as Rice had already left the building. In reality, that is an impossibility in emails  have a time stamp of when a correspondence is sent. So this letter is correct on time stamp. It means that someone sent  this letter after Susan Rice left the White House as a cover up. It had to be someone who had access to Rice's access of her account with NSA security clearance.
Remember in this that Samantha Power has stated someone else had used her name as a cover to unmask Americans illegally. Someone in this John Brennan group was shadowing the known names in directing this. The White House Counsel's direction of a letter in Rice's name be sent, that she accepts credit for, reveals that Obama was indeed aware that his White House had been involved in criminal abuse of power in attempting to overthrow the 2016 elections.

What is the most bizarre in this, is the fixation on Mike Flynn. We know that Mike Flynn was driving Obama, Biden, Clinton etc... to a frenzy over Obama arming ISIS terrorists that John the hero McCain created for the civil war in Syria, in General Flynn was warning that America should not be using Libyan weapons to arm terrorists in creating another theater of war.
There were meeting with General Flynn and Russians, but General Flynn had alerted Defense Intelligence of those meetings, and yet the  flags were set off in improper contacts with Russia.
The General did meet in the transition, which was appropriate in attempting to warm relations between Russia and America, as Americans had voted for Donald Trump expected. Yet Obama is fixated on this, that General Flynn is not supposed to have access to security data as Trump's National Security head.

It is reasonable to conclude that General Flynn was aware of what Russians were engaged in. If this focused on the Russian bots which had zero results on the election, it makes no sense. What this points to is Obama did not want Flynn having access to information, not to share with Russia, but information which Flynn would piece together to alert Donald Trump of the illegal operations of John Brennan running out of the White House.

The Rice Memo is important as Obama wanted it on record to protect hisself. The focus on Mike Flynn though is critical, as that is where they all were fixated. If you examine the past events, Director Comey sent the FBI agents in to General Flynn, to entrap him, and remove him from serving Donald Trump first.
As the General has a constant moving sentencing date, and has not been indicted nor convicted as a Russian spy, it proves that Obama was not interested in General Flynn talking to the Russians, but were interested in keeping General Flynn from coming across information which probably would have headed off this entire witch hunt.

We are witnessing why General Flynn was taken out. Now remember in this who it was that began this in it was Vice President Mike Pence whining about Mike Flynn lying to him. Then who entered into this, none other that Jared Kushner and Ivanka Kushner who gave Flynn the axe. Mike Pence represented Bush fam, and the Kushner's have been operating as white agents for Mosaad whose entire actions (including stopping Donald Trump from moving the US Embassy to Jerusalem) were to keep Donald Trump from being elected and once elected, joining in Obama's coup against this President.

It is still a reach in the last part and only the actions of the Kushners and Pence at the genesis of this, but Obama was locked onto Mike Flynn over arms to terrorists, and then set up Mike Flynn to be removed from protecting Donald Trump, and who carried out this Obama agenda? None other than Bush fam's Mike Pence and the leftist Kushners.


Dear Chairmen Grassley and Graham, and Ranking Members Feinstein and Whitehouse: I write on behalf of my client, Ambassador Susan E. Rice, in response to a February 8, 2018 letter from Chairmen Grassley and Graham. The letter poses a series of questions regarding a memorandum to file Ambassador Rice drafted on January 20, 2017 concerning a discussion on January 5, 2017. According to public reporting, Chairman Grassley received this document from the National Archives and Record Administration more than eight months ago.

The memorandum to file drafted by Ambassador Rice memorialized an important national security discussion between President Obama and the FBI Director and the Deputy Attorney General. President Obama and his national security team were justifiably concerned about potential risks to the Nation’s security from sharing highly classified information about Russia with certain members of the Trump transition team, particularly Lt. Gen. Michael Flynn.

In light of concerning communications between members of the Trump team and Russian officials, before and after the election, President Obama, on behalf of his national security team, appropriately sought the FBI and the Department of Justice’s guidance on this subject. In the conversation Ambassador Rice documented, there was no discussion of Christopher Steele or the Steele dossier, contrary to the suggestion in your letter.


Given the importance and sensitivity of the subject matter, and upon the advice of the White House Counsel’s Office, Ambassador Rice created a permanent record of the discussion. Ambassador Rice memorialized the discussion on January 20, because that was the first opportunity she had to do so, given the particularly intense responsibilities of the National Security Advisor during the remaining days of the Administration and transition.

Ambassador Rice memorialized the discussion in an email sent to herself during the morning of January 20, 2017. The time stamp reflected on the email is not accurate, as Ambassador Rice departed the White House shortly before noon on January 20.

While serving as National Security Advisor, Ambassador Rice was not briefed on the existence of any FBI investigation into allegations of collusion between Mr. Trump’s associates and Russia, and she later learned of the fact of this investigation from Director Comey’s subsequent public testimony. Ambassador Rice was not informed of any FISA applications sought by the FBI in its investigation, and she only learned of them from press reports after leaving office.

Ambassador Rice believes that it is critical that Congress fully and faithfully investigate Russian efforts to disrupt the 2016 Presidential election, including the actions taken by the Government to respond to those efforts. To that end, she has testified voluntarily in connection with the inquiries being conducted by the Senate Select Committee on Intelligence (SSCI) and the House Permanent Select Committee on Intelligence (HPSCI) on that topic.

I trust this satisfies your need for information on this topic.

Susan Rice has always been a loyal house niggress, as she volunteered to go out and cover up Benghazi, lie to the American People, blame innocents, in order to distract that Obama sent Amb. Chris Stevens to Benghazi to be kidnapped for Obama to rescue for Obama's re election bid in 2012.

Her memo to herself, is the same selfless action she has engaged in for Obama previously. This memo was not her action. It was done in her name from the White House, after she left the building, in order to provide Obama cover, and when it was discovered to further the frame up of General Michael Flynn. 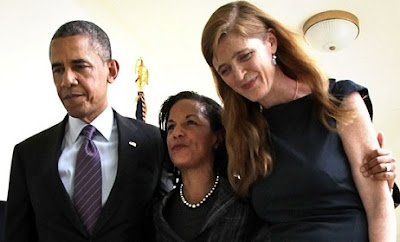