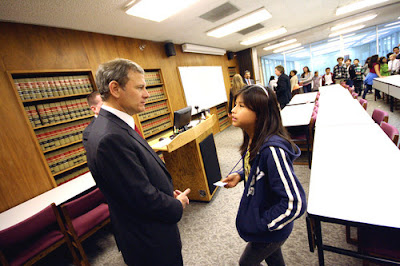 I filed a court order John and you are off the court today.


After enduring with the world the last 2.5 years of fake news in the witch hunt against Donald Trump, I sincerely believe it is time that the State legislatures of these United States begin passing "Mirror Constitutional Bills" as Colorado just enacted in the confiscation of firearms by people who simply know someone, filing a petition with the court, and the person filed against, has their guns confiscated until a future hearing.

What is good for the goose is good for the gander, as words are just as lethal as firearms as the witch hunt against Donald Trump has proven to the families of Mike Flynn to Paul Manafort. It is in this light which unless the Supreme Court removes these Colorado Laws, it should be a reality that anyone in the United States could petition a  court to say, have CNN taken off the air for 2 weeks, until a hearing takes place to prove, that they are not a threat and a danger to America.

Colorado’s red flag legislation patterns itself after similar policies enacted in several states in the last two years. It allows family members, “household members,” or law enforcement officers to petition a court for a gun confiscation order against a person if that person “poses a significant risk to self or others by having a firearm in his or her custody or control or by possessing, purchasing, or receiving a firearm.”
That initial order – called a “temporary Extreme Risk Protection Order” – can be granted without the respondent being present at the hearing, and the petitioner must only establish by a “preponderance of evidence” that the person poses a risk to self or others. The preponderance of evidence standard is one of the lowest standards of evidence and only requires the petitioner to prove that the respondent is “more likely than not” to pose a danger.


Once a person’s firearms have been confiscated, the court must hold a second hearing within 14 days, at which the respondent can be present. At that hearing, the petitioner must establish by “clear and convincing evidence” that the respondent poses a risk to self or others. This hearing, according to red flag law proponents, provides sufficient due process to justify the revocation of the respondent’s Second Amendment rights.
But “clear and convincing” is still a medium standard of proof. According to this standard, the petitioner must only prove that the respondent is “highly probable” to pose a danger. It falls short of the highest standard – “beyond reasonable doubt” – which is used to determine most criminal cases.
In other words, under Colorado’s new law, a person’s civil rights could be revoked based on evidentiary standards that fall short of those used in criminal proceedings.
If the court agrees to issue a full Protection Order, the respondent will lose his or her firearms for a full year. Once the year expires, the petitioner can ask the court for an extension to the original order, which the court can grant if the petitioner demonstrates the respondent is still a danger to self or others. If the Protection Order expires or is terminated, the respondent’s firearms must be returned within three days of the respondent’s requesting them.
Coloradans will be able to have their housemates’ firearms confiscated beginning January 1, 2020.

If all it requires is a preponderance of evidence, I could point to my cousin's wife who died because of Obamacare rationed death, and as Chief Justice John Roberts wrote Obamacare into law, the fact is I could file a motion with the court to have John Roberts suspended from the Supreme Court on that evidence, until a 2 week hearing had taken place, when myriads of people could then appear to show John Roberts is a threat to the community at large.
This would mean that John Roberts would be off the court of an entire year, before he would be  reviewed again. Of course by then, President Trump could have Roberts replaced.

The same is true for someone like Adam Schiff who ran the Russiagate fake dossier, and is still spewing sedition against the United States. It is time for Don jr. to file a motion against Schiff, and have him removed from the House.

I see great opportunities in this, because if some woman in Colorado trying to protect herself from a lying boyfriend, who petitions  the court that she is a PMS crazy bitch, and the Police come and confiscate the gun, so the boyfriend can then go over and rape the woman and beat her to death, then all Constitutional rights need to be suspended, starting with the media and the courts. Hell, I can see numbers of people petitioning for a cop to be disarmed for being a threat to the public.

A gun can kill  one to a dozen people, but a Supreme Court law can kill millions and CNN can lead a nation to anarchy or a Congressman's sedition could kill millions in riots  and war, so it is time for the Colorado law to be taken to the rest  of the Constitution in the real threats to life, liberty and the pursuit of happiness. It is now precedent, so let the court orders begin.