Bush Decay and Obama Rot at the FBI 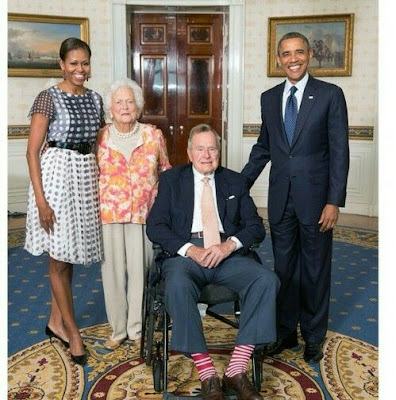 I did have two sons in the White House as President, Michelle and Barry.

I seem to recall that Kushner Media in Sunprancer has been promising the Inspector General's Report for months and it has not appeared, but was has appeared are more leaks which reveal confirmation of the disturbing reality of the FBI which Robert Mueller created, and left in stewardship to James Comey, and how under 8 years of Eric Holder and Loretta Lynch in protecting the criminal Obama regime, that what rendered out was the world that Lisa Page was speaking of in texts to Peter Strzok, where the FBI was in practice under Andrew McCabe, planting stories in the media to frame people and to drive investigations.

Robert Mueller addressed none of this in his report and more troubling, in indicting others, Mr. Mueller's team sought no indictments concerning key FBI leadership. Attorney General Barr singled out the few at the top of the FBI who were in practice receiving graft in noting the corruption there, but what America has been put through is self righteous sinners, thinking they were above the law, by not following the law, but creating a high tech lynch mob.
This is what is troubling about all of this, as we look at the Obama history, which inherited the George W. Bush Justice Department of Attorney General John Ashcroft, is how easily this Bush group, morphed into the Eric Holder lynch mob destroying John Edwards and Rod Blagojevich, while not charging others as in Hillary Clinton or Rahm Emanuel.

This is what is the crux of all of this as a pattern emerges, akin to John bunghole Roberts of the Supreme Court selling America out for Obama, for liberal favors  which the public never witnesses. What the FBI leadership was engaged in, which was so startling that current Director Christopher Wray started suspending these political minders, was not just Andrew McCabe receiving hundreds of thousands of dollars for his wife's democratic political campaign from Hillary Clinton, but a complete self deluded mindset, where the FBI was dining, drinking, socializing, accepting favors and gifts from "reporters", as long as the FBI agent kept feeding information, which was based on false dossiers to the media.

This is what Lisa Page was texting about. The FBI was planting stories, then picking them up from the media, and showing them to Andrew McCabe as "evidence". It was a kangaroo court with a pouch full of stuffed toys convicting innocent people. The worst of this is Robert Mueller in his report to the Attorney General was citing these media reports as fact, when they were not evidence, but planted information from paid political operatives.


"One of the other nuggets that the inspector general is working on is the corruption that existed between the media and members of of the FBI," Gaetz said. "Where members of the mainstream media were giving concert passes and athletic tickets and other incentives to people in the FBI to leak to them so we'll be seeing that even before we see the inspector general's report on how this fraudulent investigation began."

It was this entire culture rot, and Barack Obama is not to be blamed for this entire rot, as the death of Justice in the United States apparently began under George W. Bush, as Patrick Fitzgerald framed Scooter Libby and the conducted a 2 year witch hunt to get Dick Cheney, so liberal Collon Powell would be the next Vice President and move onto the being the first Barack Obama in the White House.

The decay under George W. Bush, which concentrated under Robert Mueller's central authority as he federalized the agency into his people, allowed in this absolute power when he left a series of fiefdoms where agents ignored the law in management positions.
It is forbidden for an FBI agent to accept gifts from the media, and this is what took place in Russiagate. It was pure Obama rot by this time, as the FBI agent thought nothing of it to cover up this crime and lie about it when questioned.


A senior FBI official accepted two tickets to a sports event from a television reporter who regularly covered the bureau, the Justice Department’s inspector general said Tuesday.
The official did not pay for the tickets despite having initially claimed under oath to have done so, according to the watchdog, which said the official’s actions violated federal regulations on gifts.

What the Inspector General is recording is this rot at the DOJ and FBI. It is much bigger though than Donald Trump. We have witnessed the Mueller investigators terrorizing family members from Attorney Michael Cohen's innocent wife, to Paul Manafort's innocent wife in a strip search, to Roger Stone being swatted, to the son of General Michael Flynn being threatened if  they did not cooperate to get Donald Trump.
All of these people have had their lives destroyed and it is costing them millions of dollars, This is not justice. This is a high tech lynching of Americans as the FBI leadership sat at sporting events as the Christians were fed to the legal lions in the dungeons.

There is also a most disturbing pattern in this under Obama rot of the FBI and DOJ, in Val-erie Jarrett had expanded the Al Gore and Bill Clinton compartmentalization of cover ups under Jamie Gorelick which caused 9 11, to secret information was disseminated to over 100 people who had no reason to be reading Samantha Power's unmasked names of the innocent for Susan Rice, for Barack Hussein Obama to frame Donald Trump.
This was deliberate and with reason, just as the John Kerry document dumps of classified information to Congress to start the witch hunt, as the more mouths that read classified information, are the more genitals to whisper it to pillow talk to feed the closed gossip of Washington DC, so the refrain became a chorus of John Brennan's "Trump the Russian Asset"

We have witnessed the effect of this in types like Kurt Eichenwald in his brain seizures and the duped Evelyn Farkas who destroyed herself, because she was whispered things, and her group of contacts were whispering the same bogus information, which sent her off to Morning Joe to voice a Russian Conspiracy which never happened, but she was an unwitting tool in this, as much as the seduced Lisa  Page was intoxicated with the power of cock, in all these people were doing was engaging in activities they had observed their superiors were engaged in, and which was expected of them to win a case or push a political agenda.


“We frequently find that the universe of Department and FBI employees who had access to sensitive information that has been leaked is substantial, often involving dozens, and in some instances, more than 100 people,” the IG said.

This was a wholesale mind conditioning beyond what Hillary Clinton engaged in in the 1990's in stealing FBI files to blackmail people. In  this no FBI files were stolen, instead they were created with false evidence, and instead of blackmail, they were disseminated to the media to frame innocent people.

I can not stress enough in this that when Lisa Page texted about salting stories into the media, this was not her idea. She did not develop it. This was something others at the FBI had engaged in previously. That is what is bigger than Donald Trump, because EVERY federal prosecution and conviction from 2008 in Obama's stealing that election, is now subject to review or should be thrown out of court, and that includes terror convictions, because what was taking place in DC against Donald Trump is as old as Patrick Fitzgerald in framing Scooter Libby. This was motive of operation in pressuring people in terrorizing family members to using the media to indict and frame people in cases. What the world has witnessed in the ordeal of Donald Trump has happened how many thousand times over?
We know for certain this went on wholesale against the Bundy's of Nevada and ended in the murder of LaVoy Finnicum in a Special Agent Gregory Bretzing set up for Hillary Clinton's Uranium One deals with Russia.

Robert Mueller and the Inspector General have yet to address the myriads of trolls and bots who descended upon social media and websites, screaming for the slaughter of the Mormons of the Malheur Refuge. Those quotes just did not happen. It was organized and has yet to be revealed in an investigation, as this was this same corrupt group at FBI and DOJ inciting mass murder for 30 pieces of uranium.

What you have witnessed is the Mockingbird unleashed. The Mockingbird is a CIA  program to use the media to smear people in the modern age. The CIA sent it's assets to contact FBI political minders, who then fed information to smear and destroy people targeted by the Obama regime, which upon becoming a story, then fed back as evidence to the FBI, which activated, engaged in a habit of framing people  by the charge of "lying to the FBI", which activated Justice and criminal charges and convictions followed as lives were destroyed.

“[W]e identified instances where FBI employees received tickets to sporting events from journalists, went on golfing outings with media representatives, were treated to drinks and meals after work by reporters, and were the guests of journalists at nonpublic social events.”

As President John Adams lectured at the founding of America, government is only as good as the good or bad people placed in charge of it. We have witnessed how a few political operatives in a key positions can activate the security system of the police state, using the media to frame people, which has led to murder in Oregon and the successful overthrow of Donald  Trump's MAGA. Sean the homo Hannity can say how America came close to losing everything  and Rush Limbaugh can lecture about how close America came to using the Constitution as toilet paper, but the reality is Donald Trump's MAGA ended with the FBI investigation based on the direction of CIA Director John Brennan, as Donald Trump has morphed into Jeb Bush and the Obama 3rd Term.
Donald Trump did not have to be removed. That was never the intention, as the 25th Amendment and Impeachment was the diversion. All that was needed was to change Donald Trump from 2016 and Donald Trump was changed by this investigation and frame up.

Once again, this is another Lame Cherry exclusive in matter anti matter.