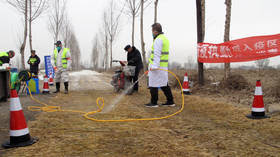 Yeah Jin Ping, hose that deadly virus off as them red cones will stop it

I am going to tell you how the world works from Smithfield Hams to the pork which is going to be appearing on your menus MADE IN CHINA.
This deals with the African Swine Fever epidemic sweeping through China, and which not YET made the leap to humans, and it will, as China is a shit hole, and each of you had better figure out that when Jared Kushner and his Tel Aviv Loyalists get done with their American Holocaust of Protestant Christians, in replacing them with Muslims and Jesuits, that this many foreign vermin among the American People, is already breeding a disease infestation, and a plague will sooner than later erupt, just as it has with the pigs in China.

🐷 Pig farmers in China are on high alert due to the African swine fever sweeping through the country — and now they're placing their animals in high-security farms #非洲豬瘟pic.twitter.com/w0QkiLP0QI
— TicToc by Bloomberg (@tictoc) April 20, 2019

The epidemic is affecting some 150-200 million pigs, according to estimates by financial analyst firm Rabobank, and the country is expected to face a 30 percent loss in pork production this year and next. At some locations losses due to a swine fever outbreak might be even worse, reaching 50 percent.


The Chinese have been taking American pigs into China, slaughtering them in order to gain control of the market as they did with cast metals, and then have been shipping them back to the United States to corporations like Smithfield Hams.

Now comes the part of the ruthless Chinese who sell poison toys to kids. 200 million pigs is the number of dead hogs. I have already told you that there is not any way a ruthless Chicom is going to take fine American corn fed pork, and ship it back to Americans. No they will switch it out to that soy pork poison and sell it.

So now comes your education in do you really think that China is going to throw away 20 billion pounds of pork, just because it is a feverish festering sore? Hell no they will not do this, and what they will do is take in American and Vietnamese pork and ship that pork back to the United States in as large of quantities as they can.
I promise you as Donald Trump Twitter Rages at China and thinks he is getting something over on them, that those damned Chinese are sitting behind the Xi smirk thinking, "OK fucker, we will get you back as all that sick pork is going to be sold to Americans at premium prices".

It won't be entire shipments, but just like all things, there will be a number of these sick pork products salted into the hundred assortment of hams. And you can forget the USDA protecting you, as Obama and Oprah gutted that protective group, as I warned you here of the "size of eggs" had dropped from Large to Medium, all passed by the USDA, and you can bet your ass, that the large eggs all went to China and you got the culls. Just like when you get those eggs on sale, you are not supposed to notice that some of the yolks stick or the whites are running........that is the way it works in 40% of the eggs in a 12 egg carton are expired and no one enforces the law.

There is an entire scam in corporate America. Expired products do not get discarded, they simply are mixed back into the new product and resold. I once watched a steak sit for 3 weeks in a display, and it never changed color due to the preservatives on it. Given another week, that steak would have been resold to a cheap restaurant  and sold  as prime beef. The hinterlands of America get all the dregs from fruit to meat. We have entire display cases of expired meat which is still being sold, just like our Pepperidge Farm breads are in carts, from east coast cities, removed from the shelves for sale to rural people.

I hope you get the point that corporate America is doing this every day to you. So you think that fever pork from China is just going to be thrown out? Hell no it will not, and as this is something you think you can avoid by eating beef, well tell that to your cats and dogs, as this poison pork is going to be sold in the bi products to American dog and cat food manufacturers........and you just wait until this shit slips into the hog feed supply in the United States and an outbreak of African Pig Fever hits the United States and no one  will know how this happened.

Pigs are unclean. That is why God told the Hebrews to not eat that shit, as it carries disease and worms. One thing I remember about pigs on the farm is we were always vaccinating them for a myriad of diseases and worming them.

......and now America has been betrayed as China is processing American food and shipping that poison back to the United States. These pigs are a foretaste of a coming epidemic from Kushner's hundreds of millions of vermin he is importing. Where in the hell do you think African Swine Fever comes from but Africa? How did it get to China? China was importing African live pork or feeding  goddamn pork flesh to pigs they sell to Americans, which is against the law in the United States.
Sooner or later this China disease is going to hit the United States whether it is pigs or it is Mexicans. America has already had SAARS and Bird Flu out of China as they are a dirty people. You have been warned and in the labeling now you can not trust anything, as these crooks slap AMERICA on things that might be grown in America, but it is processed in China with all of their filth.

With that, once again, another Lame Cherry exclusive in matter anti matter.