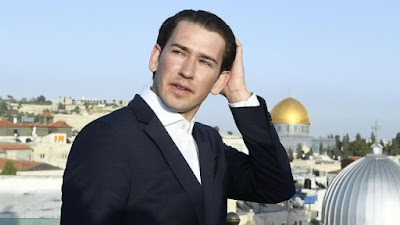 One can not help but admire Chancellor Sebastian Kurz, because whether he is President of Europe, or Chancellor of Austria, he is a global leader, and has done more to displace and unseat the United States from the world stage, all without a trillion dollar nuclear Pentagon budget, than all the Rothschild, Soviet, Chicom and Obama assaults upon America combined.

The remarkable thing is, is that Sebastian Kurz accomplished this all in plain sight, and more relevant is, when he appeared he gladly opened his arms to President Donald Trump of the United States, by offering to host a Putin Trump Summit, but was rejected by Mr. Trump in the worst sort of way. Sebastian Kurz would have made the United States Austrians footstool to serve a global order of peace and prosperity, but after the Trump rebuff......Sebastian Kurz focused upon a world without the United States being the problem child in it. 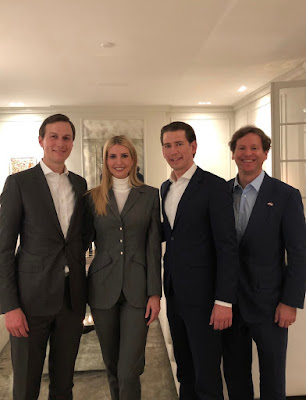 After showing Ivanka what a real European man was, Sebastian Kurz was off again on a new glory for Vienna, in the most interesting and overlooked part of the planet in the Muslim areas of southern Russia. This region of Azerbaijan has always been a backburner  area for Russia and the United States, where not much was done as Turkey tormented the peoples there. Not with Sebastian Kurz as the Chancellor first move to the Balkans to slam the door shut in southern Europe to both Turkish, Russian and American intrigue.
Kurz then astutely moved into the Caspian region in a brilliant strategy as he displaces the United States.

A new bloc is emerging in the greater Middle East with the declared objectives of dominating the entire Arab world, confronting and containing the US and its allies; and controlling and benefiting from the entire hydro-carbon economy, from production to transportation.

The leading members of the new bloc are Turkey, Iran, and Qatar; with Iraq, Syria, Lebanon, and Jordan submitting to the new bloc.

What the US now leads is weak Iraq, Israel and Saudi Arabia, against Turkey, Syria, Iran, Lebanon, Jordan and Iraq leaving the US coalition behind. The Russians are pleased in this, as they have good relations with Iran, Syria  and  Turkey, and are not threatened by European control of this region as there are not European troops in tow.

Vienna by this has leveraged the United States into a population defeat. Penned Turkey between the Balkans, Russia and Azerbaijan, with Iran only having Turkey as a bedfellow for their problems with America, and Tehran would be most pleased to see Ankara fade away too.

Think of the Caucasus as the outer gate of the Balkans. In order for China or Russia to ever mount any kind of beach head on Europe, and that includes the United States, they would have to do it from the Khyber and bleed their armies dry over the thousands of miles of mountains and sands. Sebastian Kurz has built fortress Europe, while beginning the process of locking the door on the United States, China and Russia.

The money laundering hub of all of this is Qatar, and in that Sebastian Kurz has gained control over the gold road there, and is now in control of the money hub where the US has an indefensible naval base located. It is a matter of time before the US is humiliated there in being forced out by the knives behind the shadow screen of "terrorists" on behalf of the Russians and Iranians, who desire America gone......as most of the Jewish leadership does, as they are in bed with Sebastian Kurz too.


Qatar has emerged as the dominant power regarding all issues pertaining to the regional economy.
...
Meanwhile, the Qataris and their allies have made it clear that they do not fear a US reaction to the emergence of “the Middle Eastern Entente”.

Qatari senior officials attribute this to repeated threats from Doha that should the US interfere with the new bloc and its ascent to prominence, Doha would order the immediate closure of the huge US base in Al-Udeid, Qatar, and would also stop interceding with Tehran to prevent Iran-sponsored Shi’ite jihadists from attacking the US Navy base in Bahrain. As well, the growing dependence of the US Intelligence Community on Turkish Intelligence (Milli ?stihbarat Te?kilat?: MIT) for clandestine operations in Central Asia and in support of the secessionist Muslim communities of both Russia and China accounts for the US muted reaction to the Turkish abandonment of NATO. 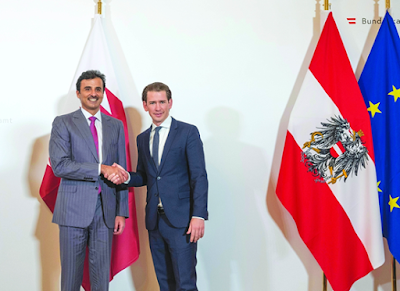 "Together with Minister @Karin_Kneissl and Minister # Löger we had a good conversation today with the Emir of #Katar, Sheikh Tamim bin Hamad Al-Thani. We talked about our bilateral relations, economic cooperation and regional developments."


All of this maneuvering by Sebastian Kurz has one focus, in he wants to bring home Jerusalem for the Habsburgs and the Pater Pope to the European order. This is an epic crusade, and is why it is vital the European South is secure, as a secure European South is the Apian Way control of Alexander and Rome to the Indus.
In the central European minds, the Greek and Roman Empires never ceded in their vanishing the right of Europe to original empire lands. One day Sebastian Kurz for the Habsburgs will establish a rule from Ireland to the Indus River, with all of Africa under the European Super State.


During the meeting, they discussed aspects of enhancing co-operation to cover various fields, especially in politics, economy, investment, health and education, in a way that serves the interests of the two peoples and countries.
They also discussed the latest regional and international developments, especially the situation in Palestine, in addition to the Gulf crisis.
...
The Amir and the Austrian Chancellor witnessed the signing of two memorandums of understanding (MoU), at the Chancellery in Vienna.
The first MoU was on economic, trade and technical co-operation between Qatar's Ministry of Commerce and Industry and the Austrian Ministry for Digital and Economic Affairs. The pact aims to promote economic relations, improve the level of trade exchange between the two countries, encourage the establishment of exhibitions and mutual events and exempt customs duties on some imports and exports.
The second MoU, signed between Qatar's National Tourism Council and the Austrian Ministry for Sustainability and Tourism, aims to develop and promote co-operation between both countries in this field.


The intricacies of this are fantastic in the details of Sebastian Kurz, as his control of the Mideast then is the choke point for control of the China Silk Road. See China may be allowed to build it with Chinese gold, but in the end, the gate of this Silk Road is not going to be in Europe. It will be the Khyber Pass, as the Europeans collect the tolls, as Peking in its aging population implodes. China will be used up, and not have any resources to ever crawl out of it's mountains or Gobi to threaten Russia or Europe. Russia and Europe in this grand strategy is to expend herself on America in annexing the Alaskan oil fields.

Since US influence in the Arab Middle East had, by 2019, become close to non-existent, despite the presence of US forces in Syria-Iraq-Jordan and special relations with Saudi Arabia, the US focus has been on stifling the primary north-south and east-west arteries between Russia, the PRC, and the greater Middle East by hitting the weakest link: Azerbaijan.

Washington is convinced that if great pressure is applied, then Baku would cut the crucial transportation arteries passing through, and interlinking in, Azerbaijan to the detriment of the New Silk Road and the bloc supporting it. This, however, would only galvanize both Turkey and Iran into further anti-US actions in and around the greater Middle East, thus further empowering “the Middle Eastern Entente”.

All of these pieces, no matter how small or large are given absolute attention by Sebastian Kurz in the details. Every leader is smiling before, during and after meeting the Chancellor in a most remarkable diplomacy. It is in their interest for the Kurz Pax, a peace of the great German diplomacy where all prosper and govern under the good offices of the Roman Empire reborn. 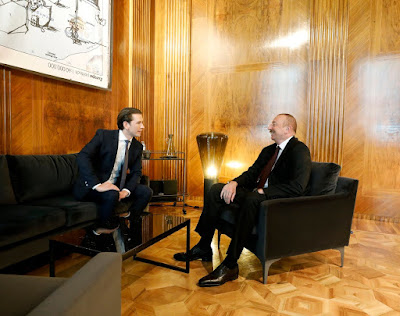 I had a good exchange with Ilham Aliev, President of #Azerbaijan, at the margins of talks on Nagorno-Karabakh in #Vienna today.


Sebastian Kurz has brought in the suits on the ground as America has nothing again, by threats of boots. The reality is that Kurz has these nations protecting their interests as connected to Vienna, so it cost nothing for Vienna, and produces an inflow of wealth to expand the financial, military and diplomatic control of Eurasia and the world.

Once again Chancellor Sebastian Kurz has gained the prize as all looked on, and none protested nor threatened, but all were pleased in thinking their interests were made more secure by the Chancellor........as America has yet to comprehend each day it is being forced back to her ocean shores as the world of Kurz is expanding to a place without America.

Where is Stephen Miller the Jew, the Kushner Jews? The Pence Mafia? Where is any sense being spoken to Donald Trump is his claque alerting him that every day he is weakened as he diddles with China which is sucking the life out of the United States.

Donald Trump is a dinosaur of a world extinct as his policies create an American Protestant genocide for Jesuit and Muslim supplantation. Sebatian Kurz though is a Renascence Caesar, he is an Alexander without troops, who is re establishing the empire for glorious Europe. One day he will have his army to protect these lands as America crumbles away out of necessity, but now the old man that Donald Trump has, is deluded by Tel Aviv lullabies which do not sing how naked this king is, and another is sleeping in his bed, eating his steak and receiving the adoration which the old man is twittering through unaware.