Institute of the Mossad 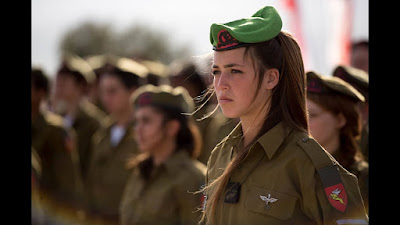 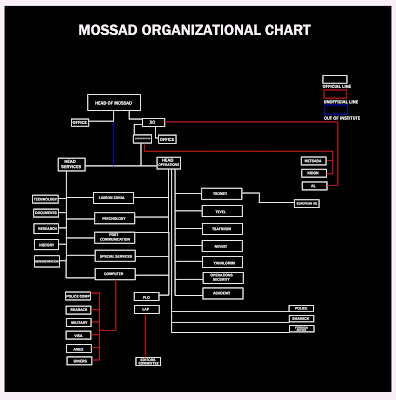 Click on above graph, copy, paste and enjoy the study of the Mossad.


When Victor Ostrovsky published his Mossad memoirs in By Way of Deception, he provided insight into the terminology then. A KATSA was an operative. As he states most people use the world AGENT, but that is incorrect in the Mossad, as an agent is a funded asset of Mossad. They numbered 35,000 globally, with 25,000 active and 10,000 sleepers. The majority of them serve in the United States which is wide open to the Mossad.  The Sayum are volunteer Jews, as they must be full blooded Jews who assist in operations in their vendor vocations from banking, to housing, to law enforcement, to airlines, wherever the Mossad requires an asset.

The agents are divided into black, Muslim, and white, non Muslim, with WARNING agents alerting against war, WMD's and other attacks.

In the graph above you will find words foreign to you. That is by design. LAP, stands for psychological warfare and controls the entire Jewish press and numbers of other foreign outlets.

Some compartments of Mossad are so isolated and small, like Unit 504, that they operate as a Mossad within the IDF, or Israeli Defense Forces. Other units are 8200 which is SIGNET, and 8513 which handles visual intelligence. 8520 replicates furniture, devices etc... to be planted in homes or offices for bugging the area.
With 8520 is KESHET or NEVOIT, which not only replicates objects, but does break ins to homes and businesses, and computer where files appear in other forms and in most cases Americans are blamed for collusion over these operations.


SHABACK often appears, which is the FBI version in Judea, in homeland security. APAM is intelligence security while  AMAN is military intelligence.
Sometimes VISA means just that, in it is a counterfeiting wing of the Mossad which creates false identities or shadow identities of real people that a katsa or combatant operates under.

Metsada  or Komeniute is another one of those Mini Mossad's within Mossad. They manage  the combatants, who are deployed in most cases out of country in dangerous situations or lethal situations and are of the assassination wing.
Combatants are operational agents, housed in the ultra Mossad within Mossad, which includes KIDON, which is the Mossad assassination unit, and the ultra secret AL which no one gains access to ever.

AL or American Intelligence sector, is American Liaison. This is the group which carries out espionage and operations inside the United States from bugging the United Nations, coordinating contacts with public officials and other more lethal ventures as smuggling in dope which the Mossad swears on a stack of Torah's it is not involved in as it is against American law to spy on Americans.

Head of Services and Operations, is self explanatory in one provides for the workings of Mossad operations and one is the actual operation.

The gut of Mossad is the Prime Minister's Summer Palace, where the Academy is. Mossad used to get their jollies when old Golda Mier visited with her "male companion" for over nighters. The Asian Ashkenaz has a pretense for listening to sex as a past time of terrorists and prostitutes.


Tsomet or Melucka is Hebrew for Kingdom. It is the recruiting department which handles the trainees who become Katsa. The Midrasha or Academy is where the recruits are trained or abused at, as the Jews believe in shock training in dumping their recruits off to be picked up by the security forces who then beat the hell out of them, or show up at safe houses, kick in the door and beat the hell  out of the recruits.
For the most part this abuse conditioning creates a mind warped to the Mossad in any activity, including criminal.

Tevel or Kaisarut, these are the embassy employees worldwide, known as intelligence officers.

Tsafririm, or Morning Breeze. This is the Mossad division which organizes the diaspora into groups for "self defense" in creating frames or cells, in which slicks or places inside homes and businesses  where documents or weapons are hidden, in  order to be used against the host government.

Yahalomim, the Gemstone or the numerical data center. Victor Ostrovsky never explains what this department is.


This is the Institute which Victor Ostrovsky attempted to expose to make certain it was under the auspices of a control apparatus to reign it in, as the Mossad is a group which ships dope, whores and whatever for profit in the Jewish state. In Ostrovsky's period, the state of Israel had a problem with finances. That is no longer the case, so one can discern as the Mossad runs volunteers to dominate  message boards and send Twitter feeds, they have tapped into the international money finance where funds are created with the press of an Obama key as the US Fed props up the US Stock Markets.
The Jewish liberation from money troubles occurred after they acquired the PROMIS software which American intelligence illegally obtained from the Inslaw group and then attempted to destroy Inslaw.
They also create virus as STUXNET 'for the Americans' in  which the Germans introduced it to the Iranian weapons program in Tehran. Obama hired "ex' Mossad to do internet control of Republicans and censoring email flow as some of us experienced.

With that, another Lame Cherry exclusive in matter anti matter with about as close of look as you ever want to get to this organization as it has not gotten any better,  and is currently running a coup against Benjamin Netanyahu for their own reasons again.