Ivanka Trump Kushner: Auditioning for Most Stupid Woman Ever 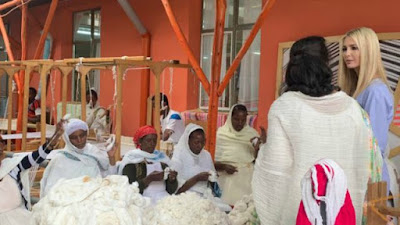 I am coming to believe the reason Jared Kushner looks like he is stoned, and keeps trying to pedal his wife off for sex with other men, is that woman drives him  fucking insane, by the shit she says.

If Ivanka Kushner's public statements are a reflection of what home life is like, it explains that "gerbil up the ass blush" that Jared Kushner constantly has.


For those who missed it, Ivanka was spending your money again, in jet flights, security and trips to Africa this past week to Ethiopia and the Ivory Coast..........to once again remove men from their place of leadership, and replace them with women.
(Seriously, if I was Donald Trump or Jared Kushner, I would make sure I got the legal stuff on paper, as I think Ivanka would sell Donald out to Robert Mueller to get his chair at the Oval Office, and Jared better not slow down for a wheelchair or Ivanka will have him committed to the geezer home.)


Ivanka first stop in was a coffee shop and textile company in Addis Ababa as part of a four-day trip to Ethiopia and the Ivory Coast on behalf of a White House project intended to boost 50 million women in developing countries by 2025.
Aiming to offer assistance and learn about the struggles of women in business, she took part in a traditional coffee ceremony, visited with weavers, and announced new financial support opportunities for local businesses.
“Investing in women is smart development policy and it’s smart business,” Ivanka said, sitting in Dumerso Coffee, a dimly lighted space with a woven ceiling, tile floor and colorful paintings. Alongside were women who work in the industry. “It’s also in our security interest, because women, when we’re empowered, foster peace and stability,” she said.

I guess you probably missed the above nuttery of Ivanka, so I will give this hint in this woman literally pays no attention to what the hell she is blabbering about, no more than that Omar Muslim in  Congress.

https://www.newsweek.com/ivanka-trump-donald-trump-syria-582446
U.S. President Donald Trump's decision to launch a missile strike against Syria on April 6 in response to a chemical attack that killed more than 80 people was influenced by his daughter Ivanka ...


Yes from Ivanka's own lips, peace and stability and she was the one blowing the hell out of Syrians, which included children, and who is more empowered than Ivanka in the White House and she has brought nothing but upheaval and violence to the world.

Personally in this Trump economy, inflation in food and fuel is eating me alive. My Trump taxes WENT UP. My life is worse than under Obama. That is why it galls the hell out of me, when I see Ivanka dumping 50 million dollars into shit hole Africa........and dumping 150 million dollars more, when say all the people in Nebraska are under water from HAARP weather mods flooding every Christian out.


The new global women’s initiative involves the U.S. State Department, the U.S. National Security Council, and other American agencies. It aims to assist women in developing countries with job training, financial support, and legal or regulatory reforms.
Money for the effort will come through USAID, which initially set up a $50 million fund using dollars already budgeted. The president’s 2020 budget proposal requests an additional $100 million for the initiative, which will also be supported by programs across the government, as well as private investment. 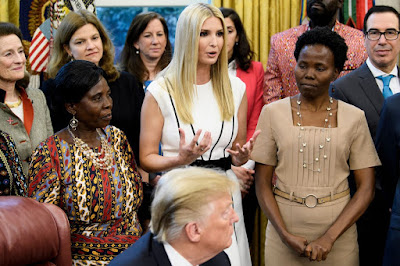 Seriously Ivanka Kushner is giving 200 million dollars to teach people how to make coffee and run a loom. I mean JESUS H CHRIST ON A MULE. It is a fucking LOOM!!! You got yarn, you got the wood runners, you got the pedal, and that is it. If these Africans need to be taught that, you might as well turn out the lights as even people with 40 IQ's can figure that out.

And what about coffee? You pick the beans, roast the beans, and  that is coffee. You don't fucking need 200 million dollars of my money to teach people shit like that!!!

That is why I think Jared  Kushner is nuts. Why I think Donald Trump goes Twitterage all the time. I mean JESUS H CHRIST ON A MULE, could you imagine the shit this woman comes up with.

Jared, could  you please have our lawyers contact the donut shop, because our kids donuts had holes in them, and I think that company is cheating us.

Daddy, could you please find out who this Washington guy is as he seems to be taking over America as his name is on everything here.


Yes it makes sense that Donald and Jared just give Ivanka  50 million dollars, slap her on the ass, put her on a plane, so she can go have coffee with aboriginals as no one will have coffee chats with her in the West Wing, but damn it all to hell my life sucks shit. I could use 50 million dollars as I don't need to be taught how to run a fucking loom or how to cook coffee. Jesus that pisses me off in all this poverty in shit stain America in dreams being vanished, and here is a rich girl giving away hard earned tax money to women, who in Africa will be kicking men to the curb as that is all Ivanka is about in making financial war on men. 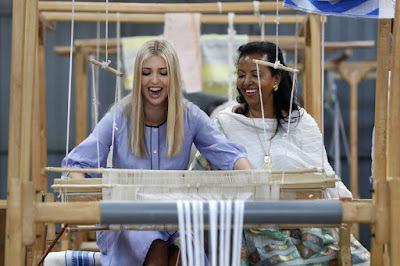 
I used to think the Obama's were the shit on the bottom of the shoe pretending to be caviar, but his Ivanka Kushner is what is on the sidewalk afterwards. She apparently drove Jared and Donald nuts, and they just pointed her somewhere with money to get her gone.
No one gives me 50 million dollars to do this blog. I had to learn how to do it the hard way. I have to work to get internet, get a keyboard and constantly work to make content interesting. No one gives me anything, because everyone here has already got the meal of a post and I am  waiting for the payment.

If Ivanka Kushner thinks African women are so glorious, then let her cash in her portfolio and spend her 50 million on looms and beans, as I am wondering about the electric bill and how to eat every month in bills.

God damn, I mean giving money out to idiots, who are  in their position because they make a life out of being victims in they won't pick up a gun to protect their own gardens, and here is peace rabbi Ivanka, preaching about how peaceful women are, when the first damn thing she did is blast to pieces Syrians with 3 million dollar missiles. 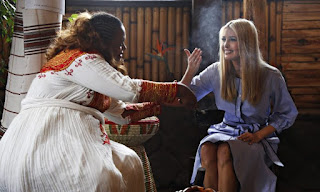 Ivanka Kushner is a poster twat of what is wrong for America and the world.  Those women in Africa instead  of huffing coffee vapors with Ivanka should have run for their lives, because even at 50 million dollars in my money and Ivanka promises, you can bet your sweet ass that most of it will be spent on staff handing out money to women who suck clit the best and pretend they like it.

https://www.reddit.com/r/esist/comments/7eqntz/ivanka_trump_says_theres_a_special_place_in_hell/
What she was trying to say, is that the GOP is hell, and they have a special place in the Senate for Moore. But seriously, wasn't she supposed to be Trump's conscience or something? She can't even get him to denounce pedos. She's not just a worthless advisor. She's kind of a worthless human being right now.


Daddy's little princess is still auditioning for the top spot of the most stupid woman on the planet award. 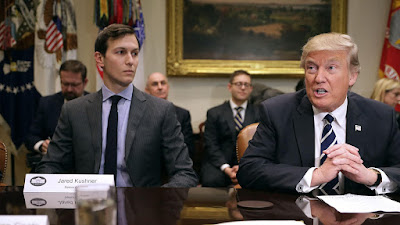 I told Jared to get her pregnant or a bottle of booze
as I'm about ready to go over the  wall into Mexico for some peace.