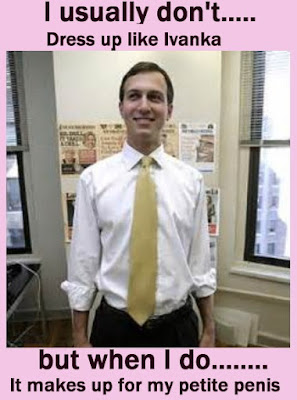 You should not ever send a slum lord Jew out to do a Jew man's job, because the little liar just will freeze up and not be able to tell the big lie that this President wants to con people about not being serious about MAGA.

The evidence was Jared Kushner appearing on FOX in the Laura Ingraham program when Kushner slipped up and called Donald Trump a liar.


Jared Kushner: Trump´s threat to close
border is move ´to pressure everybody´


As you can see by the above FOX quote, Jared Kushner states that Donald Trump has no intention of ENDING the illegal invasion of America, but instead is doing all of this to LIMIT the illegal invaders.
Donald  Trump therefore wants these criminals to keep flowing into the United States to fill a niche slave labor market for Trump's Nazi Conglomerates to exploit.


"to pressure everybody" into taking action to limit illegal immigration.


That did not take long, but Donald Trump should not sent out a Jew boy to do a Jew man's job. Mossad katsa and sayun can make you believe they love Christians in one sentence without hedging. Kushner though has to hedge it all in he does not want his wailing wall diety to send him to hell for lying.

Jared though was whining about his liberal friends in media attacking him. Granted when Clinton crony Paul Begala, called Ivanka and Jared "cockroaches", that makes little sense to me, unless he meant the Kushner's are like unwanted vermin scurrying around the West Wing that no one can get rid of, then it might make a bit more sense.

Kushner specifically took issue with reporting by CNN, where political analyst Paul Begala recently referred to him and his wife Ivanka Trump as "cockroaches."


I just would prefer the end of name calling, and we just stick with reality, and the reality is Jared Kushner is just a low rung Jew slum lord who has pimped his wife and her father for gain, and Ivanka is just a spoiled brat a JAP wanna be without morals or restraint. Jared and Ivanka would be more at home in a Saudi harem where Jared would be at home selling the harem panties to camel jockeys to jack off in and Ivanka the pouty 10th wife upset that the Sheik brought home a cute 14 year old as his new favorite.

Forgetting all that, FOX reported that Jared Kushner is stating that Donald Trump is a liar in he has no intention of securing the border and will continue to allow the invasion of the United States.