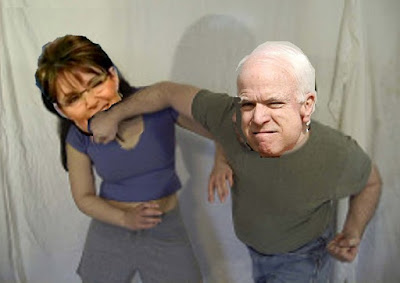 On April Fool's Day, Sarah Palin emerged in the British Press to appear in the American Press of The Hill, to announce that John the hero McCain is an ungrateful douche bag that reeks of venereal disease discharges.
The polite way that Palin versed it was, John the hero McCain gut punched her and other good Americans by humiliating them of dis inviting them from the John the hero McCain funeral and the Meghan McCain after funeral desert platters

See I pay attention to sexy legs and stories with legs. I have noticed that the censored Alex Jones is louder than before, and seems to have more insights into what Donald John Trump is up to next in going after his enemies than Jared Kushner knows what pantie size Ivanka is jumping into today.


Palin, who was McCain’s running mate for his 2008 presidential campaign, told “Good Morning Britain” she was “kind of surprised to be publicly disinvited” from the August 2018 funeral.

ADVERTISEMENT
Palin, who is also a former Republican governor of Alaska, said in addition to her, there were “good people in our campaign back in 2008 who were very, very loyal to Sen. McCain” who were not invited, saying McCain’s family “didn’t have to embarrass me and embarrass others.”


Yes the McCain's are not the most loyal of tribe, but when you have John the hero McCain as the MISSING FINK, yes another exclusive from Lame Cherry, the poor orphan girl, in McCain's fingerprints were all over the Trump frame up as one of the criminal actors, things start adding up.
Sarah Palin is crawling out of the moose work in tagging John the hero McCain, because she caught wind that Donald John is out to crucify him.

This is most interesting as besides sexy legs which I follow, TL noted that last year as in 2017 AD in the year of our Lord, Sarah Palin was the featured speaker at Trump Mar Largo in Florida. Guess who showed up?

Ivanka and Jared? NO

It was pure silence and pure exile from Donald Trump and his family for Sarah Palin, who just so happened in Iowa, was the first right wing Conservative Christian to give Donald John his bonafides.

And what did Sarah Palin get for that? The Trump Trans led by Mike Pence and Jared Kushner, kicked her to the curb in exile. Pretty shitty treatment for Sarah Palin.

But it gets better, in who was the featured speaker this year? None of other than Lindsey in the gay ear Graham, who just happened to be part of John the hero McCain's pissgate dossier team, with Marco Rubio and those fine feather friends, and the Trump Inc. could not be more welcoming to Lindsey Graham.


President Trump spent multiple days berating the late senator, calling him “horrible” and bemoaning the lack of a “thank you” for giving McCain’s family “the kind of funeral he wanted.”
The Washington National Cathedral, where the funeral was held, put out a statement denying it required Trump’s approval for the event.
“All funerals and memorial services at the Cathedral are organized by the family of the deceased; only a state funeral for a former president involves consultation with government officials," a cathedral spokesperson told The Hill in March.

That part is true in a President does not have much to say about the National Cathedral, but that is NOT what King Donald said. Donald John said he gave the McCain's the kind of funeral they wanted. That does not mean the National Cathedral. That means flying taxpayer jets for the cadaver to ride around in, along with the tonnage of Megs in the rear. That means sweaty Air Force personnel ordered to stand and serenade the McCain's on the tarmac. That means full executive assistance in wasting taxpayer money for security for McCain's cadaver and  Meg's food tables.

Rather clever for the National Cathedral sucking off of taxpayer funds and The Hill to twist that bit of Trump Speak.

Anyway, it looks like the indications are Donald John is moving to balance the scales on his enemies. It looks like Sarah Palin felt protected enough to come out and kick the cadaver of John the hero McCain as others more scared are not daring to come out and whine about yet.

Always good to have these signs in the shifting sands.

John McCain was a bastard to everyone in life. He made loads of enemies. His only friends were people who sold out America to the cartel, the way McCain did in Gay Ear Graham and Sweaty Rubio. Graham is minding Donald Trump and thinking he wants to rise like shit to the top, to places that McCain sold his soul for.
Think of Graham as Mike Pence's VP on a long shot. Think of Graham's wet dream in Trump's Secretary of State, going beyond McCain as Jeb Bush's Secretary of Defense. Gay Ear would sell his soul if it would help him, and at this moment, Gay Ear is washing Brett Kavanaugh's drunken balls and sounding Macho for Trump, is betting on the Trump re election, and is bringing to the table the corpse of John McCain on a platter to exonerate Donald John Trump.

Yes the Missing Link appears to be pinning the wrap on John the hero McCain. Yes that pleases me, and it would please me more if they would show some 750,000 dollar appreciation in donations, as money is no option to them. 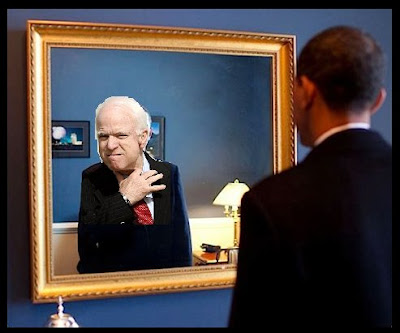