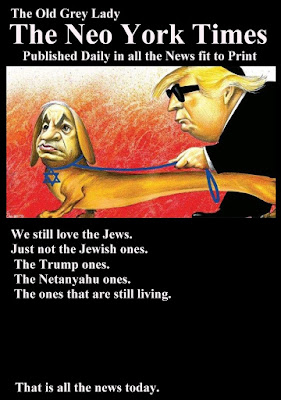 Honestly, when I saw this dog Netanyahu, I thought what an ugly liberal woman, as I was not paying attention to the 'anti semitic' cartoon which the New York Times ran on it's pages. It was not until Sean Homo Hannity, who was featuring his new glory toy who kept referring to his "partner" on air in some 3 name faggot that Hannity was promoting, until Homo let loose on the New York Times, was I even aware of this Webster Griffin Tarpley revelation.

For the readers here, leftist Webster Tarpley revealed on Jeff Rense over 2 years ago, that the power elite who run America were going to split the DNP into two parties, a communist one and a socialist one. Hillary was supposed to run the Nazi party, but in her loss, Donald Trump has inherited that group. In order to create these new Trumplers, it was necessary to Omarize the democratic party in order to drive Jews into the kubutz of Kushner Trump. That is all the New York Times is doing as a paid CIA  Mockingbird publication, in helping to found the Nazi party in America which will be the major party as the GOP is gutted.

What I find funny in this is Homo Hannity, pushes sodomy on his southern NASCAR trolls daily against their Christian Baptist teaching. This coming from another New Yorker who is a Vatican Catholic. Sean Homo Hannity is the largest racist in media, because for his wage he targets Southerners, and plays that country tune shit as his calling card.
Homo Hannity's current theme song, which is not Shooting Bullets at the Coons, which was the prior song promoting gun discharges along with penis discharges up anal regions, is something that sounds like an inbred with a 40 IQ plinked out and goes like, "Wah're cummmin ta yer sahty. Goin to play our getar and seeang our cuntry sahngs."

I think this is the inbred who markets his granny's moonshine on air too.

Yet Homo Hannity gets away with it, as Suthuns are not too bright.

In looking at the Neo Times creation, there is a great deal going on in it. There is a German Wiener dog, a Dachshund, so apparently Jews have big noses and big cocks, and Donald Trump is walking his cock on a leash. Otherwise I don't get the blonde Dachshund and the girly Netanayahu, unless it is Bibi is Don's biotch, but in this crossgender cartoon, there is a great deal going on as blind Donald Trumpchevitz, is bent over and looking more Jew than these Ashkenaz usurpers.

Oh to touch on that, Homo Hannity had a Jew caller on, who was of course Ashkenaz and was railing about Palestinians (Is no such people) and others who are promoting a description of Jewry that Ashkenaz are COLONISTS and do not belong in the Mideast. Pay attention to this one as this gets really Nazi eugenics, as the caller started quoting GENETIC STUDIES about Jews, in saying that the Ashkenaz were 50% Jewish and 50% European, so that makes them Jewish Israelite.
No that makes them halfbreeds and the Mosaad would never hire any of them, according to Victor Ostrovsky who was one of their Katsas, and blew the whistle on Mosaad corruption, because Mosaad will not employ half breeds as they are no loyal.

So as this expands out, the Ashkenaz are Asians, but the Jews are calling them Europeans now, and apparently they have been sticking their cocks into enough Sephardic Jews that they are now "Jews".
Unless of course it is the Kushner kinder, who are apparently 50% Ivanka European, who is 50% Slav, and 25% each German and Scot. Damn this is like looking at Obama's lineage in that Quadroon.
And with Jared Kushner half and half, that means his Jewish children are 25% Asian European Ashkenaz, 25% Jewish and the other 50% Trumper. Mossad would not hire these kids either or Ivanka.

Anyway Donald Trump looks like he is out for mattza balls with that dog ugly Joy Behar on a leash. 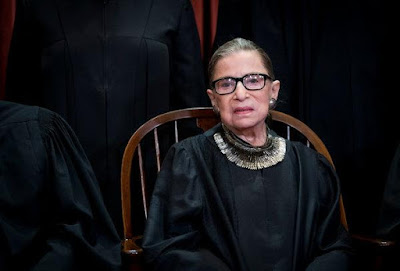 I never thought I would live to see all of this!!!

You didn't Ruthie, you went tits up and a Jesuit will warm your seat.


None of this can be taken seriously, as the elders are herding their Jewry into the same confinement they always do for their power. Hitler got the Jews in 1940  over a caviar and campaign work deal and Donald Trump only had to get his daughter bred three times by a Quadjew to get custody of all the Jewicans in America.
The Neo Times is as fiction as the Alt Right was fiction in 2016. It was all a Kushner media creation to create buzz and get the Sean Homo Hannity rednecks to vote for Trump. The Alt Right was very talented on their pay scale, but they were leftists, like all of this is the same chimera leftist. Adolf Hitler was a leftist, Jews are leftists. Donald Trump is inheriting National Socialism leftism, and is why he was railing about Venezuela socialism for cover, as this is all leftistism and it is what Christian Conservatives are going to be left to vote for as the GOP becomes a marginal party.

What you need to get through your understanding is you are being played. The media knows it is playing you, as that is what Homo Hannity's queer was writing about in the reporters all knew Russiagate was a fraud and it was all theater for the Trump Derangement Syndrome players, as the Baptists just had a sodomite in their living rooms today that Homo Hannity dropped off to condition them, that them faggies are not so bad after all.

It is all a distraction as most of the rats in the maze are herded down the road in these media cattle cars to transform them into party workers who like the security of the barbwire, as they all have guns and are told how free they are.

I have to go do something important now and eat pork products with TL, on Mexican softshells, as I am a multi culinary household with American baked beans and Native Asian Indian wild rice.

Who know that Sean Homo Hannity would be promoting the JEWROON as the Neo Jew. Sort of odd in the Jews hated the Samaritans for being half breeds, but Jesus used the Good Samaritan to prove what frauds the Jews of Roman appointment were.......same ones that hung that Galilean on a cross in trumped up murder charges.

That Webster Griffin Tarpley was one motor boating plugged in son of a speed boat Bush in he really had the inside track on all of this.