The Case for Donald John Trump 2020 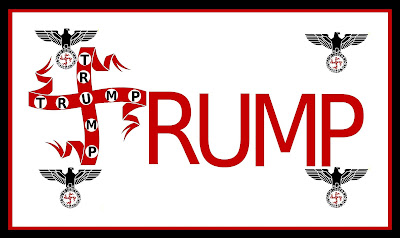 
After Donald Trump based Shia Islamocommunist terror containment on the scent of feces penis, where the US Ambassador to Germany flew in faggots to coordinate an "attack Iran" and bring down 60 other nations with sodomy laws on the books, as a Christian Conservative I will never support Donald Trump as President nor vote for him. I answer to Christ and I will not vote for this fraud ever again.

Considering that by God's Grace the Lame Cherry wrote the time line to produce Donald Trump as President, I would love to have the 2 years back of my life in trying to save America from the Socialism which Donald Trump is.

This posting is not about attacking Donald Trump though politically, it is why the Socialists in America should be supporting the American Nazi which Donald Trump has been transformed into from 2016 AD in the year of our Lord. When Patrick J. Buchanan has read the handwriting on the wall in placing Donald Trump with the autocrats of the world in Putin and Xi, the reality is that Donald Trump is presiding over a concentration camp of forced labor for Wall Street, and it all is funded by a direct pipeline into the US Treasury banking debt structure of the  globalists. In short, that is what Nazism is, and for a historical reality with the First Lady being a Marinonette worshipper, the Trump household at 1600 Penn Avenue is the definition of Nazism, as that is what Nazi's were, southern German Catholics who were liberal socialists.

This appeal is to Jim Carey, Alyssa Milano, Debra Messing and the hosts of liberals attacking Donald Trump to examine him closely in his record. This goes for the Mexican, the Afriod, the Chinoid and the Abortionists with Sodomites, as when one examines the policies of Donald Trump,  his policies have been an advacement of Barack Hussein Obama's legacy and there is absolutely no doubt.

Let us begin with the Supreme Court. John Roberts is a liberal. The Court under Trump is now 8 leftists and moderates and 1 Clarence Thomas Conservative. That is a feat that even Hillary Clinton or Obama could have succeeded in with Neil Gorsuch and Brett Kavanaugh.
Ruth Bader Ginsburg in her passing will be replaced most certainly by another David Souter, John Roberts etc.. who will see the light of liberalism once installed.
Donald Trump has cemented a liberal court to advance Obama agendas for the next 25 years. Legal Conservatism is dead.

As the subject of international sodomy has been addressed in Faggot Foreign Policy, we can examine abortion. Abortion is cemented in the Supreme Court. Under Donald Trump over 500,000 babies were aborted. Two years into the Trump 'women's right' Donald Trump in order to attempt to distract Christians from his pro abortion policies, finally limited Planned Parenthood funding. That is 500,000 babies too late and more to the point is why did the President not remove the funding before as he should of in keeping his promises?
The reason is Donald Trump never intended to stop aborticide. Numbers do not lie.
Abortion is not only cemented under Donald Trump, but has expanded to infanticide, and if you have noticed Donald Trump's Justice Department has not filed one federal challenge to the butchery of New York and Virginia.
Once again, Jim Carey should be creating artwork extolling Donald Trump as his 4 D chess has been wiping out Conservative fools and promoting all things Jim Carey stands for.

Gun Control. Donald Trump has shut off more imports of foreign firearms. Has banned the bump stock. He has not rolled back one gun law, and has not kept his promise on a national carry law. Gun Control is what Donald Trump turns to in every shooting and this is exactly what liberals want in a candidate.

Border Invasion: The Trump Wall has now become the Trump fence. Oddly no homes in America have wire fences for walls as the roofs would all collapse, so there is a difference between fences and walls....but not for Senor Trump.

Under Donald Trump and John Kelly when at Homeland, they expanded the stays of workers, imported  1.5 million more foreigners each year, and Donald Trump promised the conglomerate Nazis all the foreign labor he could import.
Donald Trump lied about DACA  and border security. The fact is Donald Trump signed a spending bill which made it harder to build a wall and expanded the illegals in America to become Americans.
Donald Trump created amnesty and went beyond anything that Barack Obama ever attempted.

There is not any reason to go down the list on American schools, American charities or American housing, as all have remained in the Obama category of being used as entities to create liberal children, reward foreign liberals invading America and ousting Americans from their communities.
Again, this is national socialism and is pure anti Christian and anti Conservative, as Blacks are slaughtered in Chicago dope wars, and Blacks are replaced by Mexicans in the work force. Indians are brought in to do low grade technology work which removes skilled White Americans.
The Civil Service of America is pure liberalism and has hardened to the bedrock of the Obama legacy under Donald Trump.

Taxes: According to ZeroHedge, Americans under Donald Trump's tax breaks discovered they were paying more. The Gary Cohn tax package benefited the Nazi Conglomerates and in a remarkable advancement of Obama policy, Amazon does not pay a penny in taxes, as the Nazi Conglomerates concentrate consumer purchases, while ridding the United States of stores like Kmart, Shopko, Payless Shoes etc... America was handed over to a few conglomerates and this has hastened under Donald Trump.

Obamacare, rationed death, is still on the books. Nothing has changed as the feature of the Obama regime was kept on the books by Donald John Trump.

Massive spending, debt spending, this has expanded under Donald Trump in more funding for all socialist policies and the pouring in of funding to the Nazi Conglomerates by the omnibus spending bills. This is Socialism pure and simple.

America is now a record energy producer. There has not been one clean coal, nuclear or clean thorium plant produced in the United States. Just more Obama green wind and sun, which was already maximized under Obama, and Donald Trump did nothing to uphold the American energy grid.
Instead Mr. Trump sold coal to China cheaply, and in turn subsidized American gas to Europe cheaply, while Americans saw energy inflation raise soda from 3 dollars a 12 pack to almost  dollars due to Trumpflation in energy prices increasing on Americans consumers.
Saudi Arabia lent the American oil producers fracking money, and in order to service that debt, America is now under Mr. Trump being bled dry of oil and gas as the Muslims have the American oil and are now taking the American's money, with zero benefit to the citizens who are forced to pay the high prices which is wiping them out.

As no one will believe HAARP has been turned on Americans to force them to buy oil and gas to keep from freezing, that point will be left out, but that is what socialism is, forcing consumers to purchase goods at prices set not by markets, but by the conglomerate state.

So as the American population is forced by invaders taking their jobs and being robbed by high prices in this American Genocide, they are forced onto dependence to the socialist state in entitlements. Each family and person becomes socialized by force as they can not survive without those hand outs. That is what Socialism is, and what leftist all clamour for and Donald Trump is advancing this by leaps and bounds in one of the greatest transformations of cultures not seen since the Bolshevik Revolution in Russia or the Nazi state in Germany.

In reviewing all of this, one can see that John the hero McCain who loved the Nazis of Ukraine would be one of the most vocal Trump advocates now, as Donald Trump is not just a National Socialist, but is an International Socialist. Mr. Trump is the defintion of all things the democratic party was under Hillary Clinton. That should be of note as Webster Griffin Tarpley stated on the Rense Program that the democratic party was to be split between communism and socialism, and those two parties would rule America, and Conservatives would have that choice or be forced to waste their vote on a fringe Republican party. Even in that Donald Trump has helped with Mitch McConnell to destroy the GOP, all exactly as Webster Griffin Tarpley eulogized and more importantly Donald Trump now leads the socialist wing of the democratic party in having replaced Hillary Clinton.

The wonderful CIA asset Alexandria Ocasio Cortez leads the communist wing of the democratic party, so all is now set and complete.

This is the case for Donald Trump's election in voters like Alyssa Milano and Jim Carey, because Mike Pence the "christ lite" along with Franklin Graham have told Christians that sodomy, abortion, genocide of Christians is all acceptable under Donald Trump. There will not be any Christian nor Conservative agendas advanced, as 2020 will allow Donald Trump to become even more flexible in implimenting the final phases of the Obama policies, which would only be held back by voting in a communist like Michelle Obama.

I am not stating that Michelle could not have the election stolen for her, but why would the cartel remove Donald Trump when he is completing all of their agenda, including world wars, while this would all have to be started again under the beautiful Michelle Obama, and that would only cause a year long delay and things do have to continue progressing along for the European Super State.

So I believe liberals should all vote for the socialist Donald John Trump in 2020, as that is exactly what he is, in Obama White, a National Socialist, a Nazi who had gone beyond even what Adolf Hitler would never have done in Hitler never forced Germans to suffer needlessly, but benefited them from foreign labor, but with Mr. Trump the Americans are whittled down as under Obama and Bush to being a fetal ball that is curled up in the corner.

This is the future of what is socialist America and Trumpstate is no better platform as Mike Pence and Franklin Graham, Judas Goat Christians while Rush Limbaugh whistles through the graveyard of the Conservative ghost, pacifying all, as Donald Trump is Birther Hussein's 3rd term as the leader of the National Socialist movement of the United States, which no longer are united, but indebted and that union survives as the Socialists States of America.

If you are a liberal, a socialist, a sodomite, an aborticidist, anti Protestant, then Donald Trump is your vote for 2020 AD in the year of our Lord. He has performed outstanding  as the White Obama and the manly Hillary Clinton for the socialist order.
I will not be voting for him again, but I am being replaced by millions of Hollywood  Nazi and Jesuit invaders as this is the tide of Donald Trump National Socialism as the millions of American Nazi's have left the democratic party to create the Neo GOP. 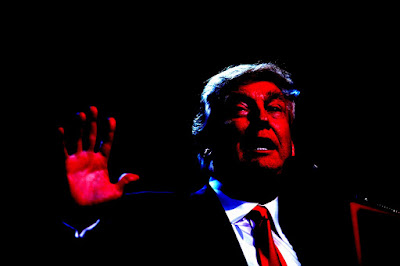 I'm just an old  Socialist in a Neo GOP