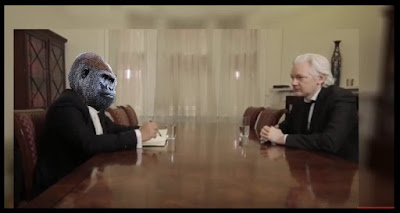 With the violation of Julian Assange's right to assylum, the saga of the Missing Link, has moved to the lethal zone of international intrigue, where the Queen of England in her MI6 has now officially invited Donald Trump to soothe the waters of America in the Theresa May led coup against Donald Trump known as Russiagate, including now the reality that Scotland Yard has apprehended Assange after Ecuador threw him out of the Embassy in London.


Julian Assange Is Being Indicted for One of His Least Damaging Offenses
Julian Assange is having his Al Capone moment. Capone, the murderous Chicago racketeer, was arrested in 1931 for in…


This has been in the works for sometime, and it is all United States led, as Assange was informed of  the inner workings of this, as Robert Mueller dropped his investigation of Trump Collusion the minute this blog posted on the Missing Link. Remember in all of this that Robert Mueller's team was focused on the Missing Link in who Jerome Corsi and Roger Stone were speaking with in the connection to Wikileaks. Suddenly it no longer mattered as they did not know, but one person did know or had contact with this coup and that was Julian Assange........and right on schedule, Mike Pence's led group has sufficiently pressured the Ecuadorans to hand over Assange.

https://www.telesurenglish.net/news/Ecuador-Rights-Group-Warns-Visit-by-Mike-Pence-to-Strengthen-US-Influence--20180628-0011.html
Mike Pence announced the U.S. will donate US$1.5 million "to fight corruption and stregthen civil society." This comes as the recently appointed general attorney, under the banner of fighting corruption, has linked former President Rafael Correa to an alleged attempted kidnapping.


Remember in all of this Russiagate that it was a group of liberals who were leaking information on the Bush intelligence community illegal operations which involved the Clintons. Everything Edward Snowden, Chelsea Handler and Seth Rich were, was LIBERAL and they were all working like liberal Julian Assange to keep Hillary Clinton out of the White House.

Birther Obama if you recall rewarded Chelsea Handler for his actions by granting a pardon. This is a messed up liberal network of operatives, but Obama was always working against the Clintons in their cabal. This has always been an internal faction of foreign interests and domestic interests on the left involved in all of this.

Put it this way, if Alex Jones and Sean Hannity in being Trump insiders, and stating that Donald John is about to crack down, and that AG Barr is focusing on intelligence criminal violations, what could be more of more interest than getting Julian Assange to point the finger at the Missing Link. What is part of this is about the John McCain, Marco Rubio, Lindsey Graham in this group and their Paul Singer funded associates, namely the Carolina Mafia which was utilized in all of this, including Niki Haley......and more to the point they put Paul Manafort into the Trump sphere to trip all the wires to set this all in motion of Russiagate.

If this is the case, then there are political targets in this Barack Obama and John  Brennan labyrinth of intrigue of a faction inside the United States leaking information to Wikileaks to leverage another faction out, and now that faction has struck back, after using the DIA as cover.

We shall soon see if Julian Assange becomes the witness for the prosecution as the Missing Link aspect now wants this criminally moved not in a Larry Klayman lawsuit for James Comey, but where the base of this has always been, an internecine fight in the intelligence ranks.

For those who thought they were safe in this in Robert Mueller shutting things down, they breathed a sigh too soon as Obama did not want Assange singing, but wanted him undermining Hillary Clinton. Now the people backing Donald Trump want Julian Assange for a global story which will permeate all through the names who kept cropping up in all of this and their associates.

Do not overlook Slate noting that Julian Assange is being indicted for a LEAST OFFENSE. That means a deal for information to be utilized while in US Custody.