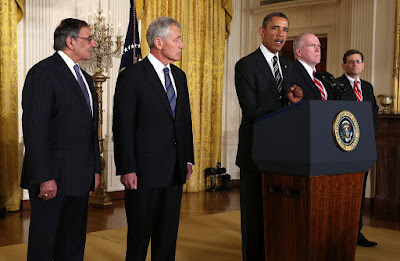 As all the posts on this blog are important, this one is a bit more important as it concerns the Intelligence Cabal which signed off on the placing of a foreign asset in Birther Hussein Obama into the White House to overthrow most of the internal and external global structure around the globe.
Obama's folks took over everything from the coke cartels in South America, creating ISIS as their persona al Qaeda wing with John the hero McCain, the upheaval in Islam lands for communist organized Marxist looting of oil, to the bloody streets of Chicago where Obama replaced the Mexican mafia with MS 13 for dope distribution control in the United States for the cartel which put Obama into power.

In the above photo, one sees the chief minder of the Clinton intelligence era in Leon Panetta, a fine DIA operative. Next to him is Chuck Hagel a Republican out of Nebraska who had a coup instigated against him, by the Obama cabal when Hagel ran the Pentagon, as Hagel was not cooperating with the emerging Obama cabal which overthrowing law and order around the world.

Behind Obama is the czar of the Obama criminal cabal in John Brennan, as Director of the CIA. Next to him is intelligence operative, Michael Morell, who in his faggery was duped by Brennan's brainwashing operation for Obama to frame Donald Trump, and later refuted his part in this coup once he figured out like James Clapper, that this was beyond anything the intelligence community should have ever engaged in.


Informal or Formal investigations by the CIA inside the United States is all illegal. There is not any formal or informal homicide.There is only legal and illegal.

If one listens to Attorney General Barr in his explanations before Congress, he has named a core group of the FBI leadership as the problem as that agency was hijacked by John Brennan. In addition, AG Barr is focusing on key intelligence agencies who were engaged in the framing of Donald Trump, and this was all led by the CIA's John Brennan as that agency was once again in Bush family loyalties unleashed on a covert operation against Americans which began with targeting Russian Americans inside the United States.

The Big 3 in this were John Brennan, James Clapper and James Comey. By the statements of James Clapper, he was drinking the koolade like Michael Morell from the beginning, as they believed the fake intelligence being fed them. Clapper though has walked back his support of Brennan as Morell did the first month, as they realized they were being played to lead their departments in this coup against Donald Trump.

What is of interest in this is Protector of America, was chosen by George W. Bush, and it was Mueller who actually created the platform of blind allegiance in the FBI which caused a few at the top in political minders working for Obama, to misuse the entire FBI.
Mueller removed old agents and brought in a rotation of new agents to condition them in a Mosaad like program of loyalties to Mueller. When Mueller left, James Comey inherited this infrastructure, and Comey was not a Christopher Wray the current Director, as Comey was a Hillary Clinton advocate of the Bush family, and this key group abused their authority in cover ups of Clinton crimes while unleashing the agency on Americans as LaVoy Fininicum who had no idea they had stumbled onto the Clinton Russian Uraniaum One deal in Nevada and Oregon, for which Finicum was assassinated over.
This entire John Brennan operation filtered down to Special Agents like Gregory Bretzing who was rewarded for his smashing of Americans in the West at Malheur Refuge, who were Mueller rank and file, but were given orders by the Obama political elite to protect the uranium cartel which the Clintons were selling to Russia.

For example, former CIA director John Brennan, now an MSNBC contributor, separately briefed Sen. Harry Reid, (D-Nev.) about the operation. Reid understood that move was undertaken so he could publicize the Russia investigation to influence the ongoing presidential election campaign.

Former director of national intelligence James Clapper, now a CNN contributor, admitted to discussions with media outlets about the investigation.

It even included leaks of classified records from former FBI director James Comey, which he said was done for the purpose of launching a special counsel investigation as retaliation for his firing.

The use of Stefan Halper, for example, a London-based American academic with longstanding ties to the FBI, CIA, and Defense Department, raises serious questions about whether CIA assets or resources were used against American citizens.


We know who ran this Informal John Brennan Cabal, in it was John Brennan directly out of the White House. Brennan was not a plumber in the Nixon White House Basement, but was sitting at the table with Val-erie Jarrett, Birther Hussein, Michelle Obama and Susan Rice.
At the Department of Justice, the scoundrel Eric Holder who had destroyed Obama and Clinton political contenders in John Edwards and Rod Blagojevich, after his burning down Waco for the Clintons, and setting up Hutatree Americans to frame the Tea Party, left a corrupt DOJ which Loretta Lynch operated for Obama to protect Hillary Clinton and to unleash FISA  courts on Donald Trump.

As this blog is the only one to focus on the Treasury Department is this, the reality is the Chicago Tribune in it's investigation reported some strange realities in the Brennan Cabal, in they were active and widespread, spying on Russian Americans long before Donald Trump appeared as a presidential candidate.


the FBI, the CIA, the National Security Agency, the Justice Department, the Treasury Department’s Financial Crimes Enforcement Network and representatives of the director of national intelligence,

The Obama White House knew it could not convince James Comey, James Clapper or Michael Morell on board for this kind of criminal persecution of Americans, so Val-erie Jarret and community organizer Obama arrived at the Trotsky Solution. They would have John Brennan run a cabal. It would be called informal association, but key political minders as Peter Strzok and Andrew McCabe would manage the direction of the FBI in the actual operations, which James Comey was for the most part kept in the dark  over, as were other intelligence agencies involved in this. As long as Susan Rice was the gatekeeper, the NSA moved as she directed against Donald Trump and millions of Americans.  As long as UN Ambassador Samantha Power's office was coordinating with John Brennan to illegally unmask people for intelligence agencies that Susan Rice was signing off on for Birther Hussein, those agencies did not realize what was being accomplished in this coup.
This is the perfect COMPARTMENTALIZATION of Jamie Gorelick protecting the Clinton's in their crimes, which set off the 9 11 terror attacks in America by design.

One of the allegations involves whether a system for routinely paying thousands of Russian-American pensioners may have been used to pay some email hackers in the United States or to supply money to intermediaries who would then pay the hackers, the two sources said.The informal, inter-agency working group began to explore possible Russian interference last spring, long before the FBI received information from a former British spy hired to develop politically damaging and unverified research about Trump


Everyone knew that President Ronald Reagan's order in 1981 forbid the CIA and other agencies from spying on Americans. There were safeguards in place including the reality that the CIA was to never be running operations inside the United States. Yet even as Ronald Reagan signed the executive order, there was Vice President George HW Bush running Iran Contra out of the White House, past CIA Director William Casey who was suffering from brain cancer, as this prototype Bush Cabal would reappear George W. Bush hugging Michelle Obama alliance of Bush Clinton and Obama, against Donald John Trump and Russian Americans. 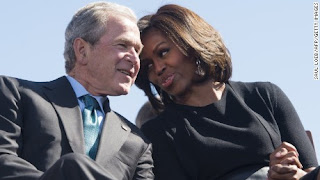 As this began, there is not any place in United States law for formal or informal. This was once again the Chicago connection of community organized crime changing Loretta Lynch word from an investigation to an event. It was all illegal and criminal as noted by Senator Frank Church in 1975 and Vice President Nelson Rockefeller in their investigative commissions, but the clever Obama's in order to subvert oversight and overthrow the US elections, employed a willing John Brennan of the CIA to subvert and overthrow America's security and intelligence network.

https://www.washingtonpost.com/news/wonk/wp/2013/06/27/in-the-1970s-congress-investigated-intelligence-abuses-time-to-do-it-again/
Jun 27, 2013 · After the Church Committee and the Rockefeller Committee [an executive branch investigation of surveillance abuses led by Vice President Nelson Rockefeller, I think the obedience to the law and ...

John Brennan is the focal point in all of this as he was the operative controlling the machine, under direct orders from the Obama's in the White House, and the reality this was all coordinated out of British MI6, Italian Intelligence and the Jewish Mossad, as the operation against George Papadopoulos revealed in his being framed to get at Donald Trump.

According the evidence of action, the breaking of laws, John Brennan was a coordinating conspirator in this for Barack and Michelle Obama at Val-erie Jarrett and Susan Rice's direction. John Brennan broke United States laws and directives in this criminal enterprise where he betrayed fellow believers who trusted him and the Obama's, namely Michael Morell and James Clapper.
Chuck Hagel was removed as he would  not have allowed the DIA to become involved in this. The first casuality in this was DIA Director Michael Flynn as the Obama Willing were the firewall put into place to keep feeding this propaganda coup.
Never forget in this that John Brennan had most willing accomplices in this, in fag billionaire Paul Singer funded this with neocon Bill Kristol and his son in law who hired Fusion GPS for Marco Rubio's place as Jeb Bush's Vice President, which ran directly into the Carolina Mafia led by Lindsey Graham and Niki Haley, as John the hero McCain dumped the Pissgate file into the FBI on the right with John Podesta on the left in this Clinton operative written dossier, which Brennan was distributing.

What Brennan began as targeting Russian Americans, mutated to a coup against Donald Trump by framing him in connecting him to the Russian government.

This was deliberate and it came out of the Obama White House West Wing in those offices directly next to the Oval Office.
They all knew this was illegal and that includes Joe Biden as this permeated thee entire Obama West Wing in this intelligence operation against the American People. And NEVER forget in this, that Joe Biden had a coup run against him to stop him from running for the democratic nomination, by this same cabal which ate anything and anyone who got in it's way.


Once again Lame Cherry in anti matter connecting the dots as no one else will in another matter anti matter exclusive. 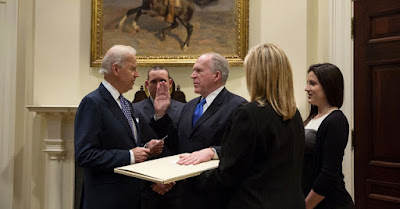