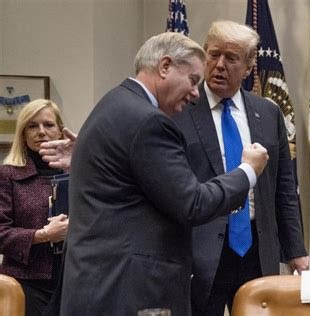 Jared gets slaves for 1000 dollars a head, you get the Americans
by the throat Lindsey and the ones that escape,
Homeland will round up for the concentration camps.

Did I not warn ALL OF YOU that Donald Trump was doing a shell game on the fake Border Emergency  and right on schedule, after this blog EXCLUSIVELY ALERTED YOU that on FOX Laura Ingraham, Jared Kushner stated Donald Trump did not want to END illegal invasion but LIMIT IT, that now the real betrayal by Donald Trump has shown it's hand, in Trump has had Jared Kushner working with an insider Trump Trans which means this is why LINDSEY IN THE GAY EAR GRAHAM has been 2.0 to push this John the hero McCain and Marco Sweaty Hands Rubio, in this is the Summer Push coming of legalized invasion on top of Trump Amnesty in that pork budget bill he just signed.

For the record, Donald Trump via John Kelly when at Homeland, opened the floodgates of not only allowing in 1.5 million of these Visa Vermin PER YEAR, but then gave them RESIDENT STATUS to stay forever in the United States.
1.5 MILLION FOREIGNERS POURING into America is not enough for Donald Trump taking American jobs in a depressed job market, housing market, spiking gas prices, food prices and Trump Taxes. Now Trump Trans is opening the floodgates to a deluge.

https://cis.org/Report/Immigration-Surging-15-Million-Arriving-Annually
A Center for Immigration Studies (CIS) analysis of newly released data from the Census Bureau's American Community Survey (ACS) shows that 1.5 million new immigrants (legal and illegal) are settling in the country each year.

https://www.migrationpolicy.org/article/frequently-requested-statistics-immigrants-and-immigration-united-states
In 2017, the top five states by the total number of children under age 18 living with immigrant parents were California (4.1 million), Texas (2.5 million), New York (1.5 million), Florida (1.4 million), and New Jersey (767,000). These states accounted for 56 percent of the 18.2 million children with immigrant parents residing in the United States.

That was in Donald Trump's 2017 AD in the year of our Lord, that is over 10 MILLION FOREIGNERS under the legal age, and Jared Kushner wants more, more, more!!!

And who is the one person who has the only authority to sign off on what Kushner and his Treason Trans is about to unleash? None other than another Jew in Stephen Miller. Yes Politico notes it is not Donald Trump, but Stephen Miller who will put the seal of approval on this Kushner Invasion


You know you can trust Jared Kushner as he unleashed this gem to Newsweek, the CIA Mockingbird publication which I found on the Rense links.

Yes Jared Kushner has stated that all of these inmates coming out of prison are Republicans. Now is this the criminals Dad in Law Trump is pardoning to your neighborhoods or the actual inmates? Kushner is not specific, but it really does not matter as Kushner is a damn liar, as the reality is all of these prisoners are registering and voting as DEMOCRATS. That is why Kushner has been passing all this get criminals out of prison, as Kushner the liberal helping the Democratic National Committee.

Oh by the way, Jared Kushner is a damned liar.

Felons register as Democrat over Republican by 6 to 1 ...


So in review of this, you have on this Trump Trans, TWO MIKE PENCE TROLLS........Yes Mike Pence is along with Donald Trump about to legalize the deluge in this American Genocide of White Protestant Christian Americans being replaced by the swarthy Jesuit and Muslims.

I warned all of you to not trust Donald Trump in this, that you were being set up, and now it has been placed into the press to get you to accept your being erased from America's future.

Donald Trump legalized Obama's illegals. I told you that and I told you that Trump was just beginning in this betrayal and now there are not going to be any limits on the foreign vermin coming into America, who will be legalized to permanently stay in America once they set foot in the United States.

This is the Kushner Invasion and maybe you non donors should be asking yourself why is it that no one else is telling you this and all you get are Trump Clappers? It is because I am not a sell out and actually trusted rich people to pay for the work here that no one else would do, as your press is nothing but pied piper traitors leading you to the last generation of Americans.

Donald Trump has finished off the Republican party. These numbers will only elect Trump Nazis (National Socialists) or AOC Communists. That is the reality.

This is why frauds like leftist William Weld are being funded to "challenge" Donald Trump and other flakes like Jeff Flake who will endorse democrats, as it will leave Conservatives without any candidate in the 2020 race or put your vote on Pied Piper Don.

That is why Donald Trump does zero on the US Border. It is all diversion for this Kushner shell game which is what this was designed for all along.

I have stated before that I will not be voting for Donald Trump for his betrayal of MAGA across the board. Each new ruse only cements that reality, as with Mr. High Rise doing this before the election, what do you think Mr. Gun Banner, Trump Tax, Trump Depression is going to unleash in his Nazi America without restraint and full AOC assistance as suddenly Donald John "sees the AOC light" which is the same illuminated thought of Jared Kushner for the past 2 years.