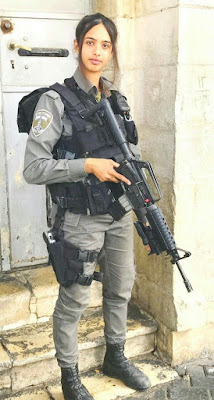 For most of you reading this, this is ancient history and in your being brainwashed by Jewish propaganda, you will not comprehend how all of this feeds directly into 9 11 and the relationship of Donald Trump with Tel Aviv. It is though something that I suspected for some time, but the proof came from Mossad katsa, Victor Ostrovsky in his memoirs of the Mossad in By Way of Deception.

The period in question is 1982, and Ronald Reagan having survived an assassination which is still shrouded in mystery, was in a war of words with Jewish Prime Minister Menachim Begin over Beirut Lebanon where the PLO terrorists were operation. Reagan in two letters pleaded for the Jews not to invade Lebanon and rid themselves of the PLO, but Begin's reply was a rebuff to Reagan of "Do we not have the inherent right to self defense?"

The IDF invaded, smashed the PLO, drove it out, and smashed Lebanon and left behind the Lebanon as it was and is today, a criminal cesspool. What America left behind was in good faith a peacekeeping force of 1200 Marines with the French with 150 paratroopers and 1200 Italian soldiers, due to the fact that the IDF and Mossad had handed over PLO refugee camps to the Jesuit Lebanese (called Christians in the media) who proceeded to slaughter men, women and children by shooting them and slitting their throats. The Jews watched on from their listening posts overlooking the camps.
This is what set of the war of words between Tel Aviv and Washington DC, and brought in the peacekeepers.

At this time the Mossad, who had agents all over Lebanon spying for them, had a stinker or a stool pigeon who worked at a body shop, refitting vehicles for smuggling. The Jews smuggled a great deal of contraband out of Lebanon band back into Judea, which the Mossad sometimes reported to be confiscated.

A report surfaced that a large Merceded truck was being hollowed out and refitted. This was a major operation and Mossad knew this was going to be a major terrorist attack. Beirut station could not forward the information to the Americans, so it was passed to Mossad Chief Admony whose response was, "We are not here to protect the Americans. They are a big country. Send only the regular information".

What this regular alert was, was  nondescript warnings from Mossad, without any information, just lost in 100 other warnings of a terror attack may appear. The Mossad and everyone else knew that a big bomb, meant one thing and that is the Americans were going to be hit hard. 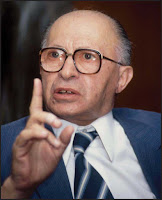 
I have always suspected in this, that Begin was sore over the rebuke of Ronald Reagan, and the IDF was snarling over the Americans, French and Italians invading their fiefdom of Lebanon, and the Mossad was spoiling for retaliation, so when the opportunity arose to bloody the United States, the Mossad relished the opportunity.

What followed was the greatest slaughter of Marines since the Tet Offensive in Vietnam. The truck approached Beirut Airport on October 23rd, 1983 AD in the year of our Lord, past the Israeli sentries, through a Lebanese army checkpoint and none of them sounded the alarm. The Lebanese were paid by the Mossad and the IDF knew completely certain that any truck was a threat, especially a Mercedes truck on the move.
A US Marine guard frantically attempted to sound the alarm as the truck ran through the parking lot and picked up speed. It was moving at such high speed as it approached the 8th Marines base in the 4 story concrete building that is smashed an iron gate, smashed through the sandbag sentry post, went through another barrier, went over a wall of sandbags, where it enter the lobby of the hanger and detonated. The entire building came down as the Marines slept in their cots. 241 Marines died instantly. 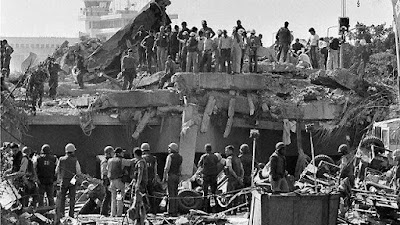 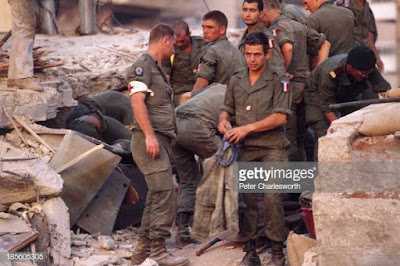 The Italians? They have a special relationship with the Mossad. They were not attacked.

With that the Americans left Lebanon, humiliated and bloodied. At Mossad headquarters, the excuses that Ostrovsky recorded was that, "their agent might have gotten killed. the Mossad had dodged a bullet as it might have been the Jews and it was a small thing to have that many French and Americans slaughtered".

The general consensus of conversation at Mossad headquarters was, "Hey the Americans wanted to stick their nose into this Lebanon thing, let them pay the price".

Ostrovsky protested and stated that Mossad and Israel would pay for this, but he was rebuked and told to shut his mouth from laison officer Amy Yaar.

13 days after the slaughter, the Mossad passed along a list of 13 conspirators who the Mossad blamed in Syrian intelligence, Iranians in Damascus and Shite Mohammed Hussein Faddallah.

I suspected that the Mossad's hand that rocks the cradle was behind this attack on the meddling French and Americans, and Ostrovsky rings the bell exposing their part in this. There is absolutely no denying this was Israeli policy coming out of Mossad, and the Jewish regime in Tel Aviv did absolutely nothing to stop it. There is more to this story though in how the Mossad did not help the Americans later by Prime Minister Simone Peres did, that will appear later here in another enhanced rendition, which you will remember as the scandal which brought down President Ronald Reagan.

Now you know the real history, not the propaganda in what you have been brainwashed with.