The Trump Cup Runneth Over 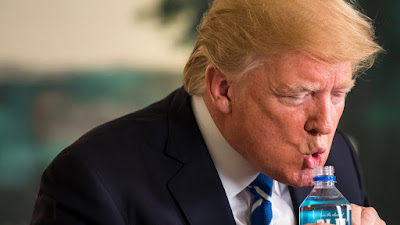 
See I need a translator as President Trump was not speaking English out in California today, when he told his clappers, that America was full and had no more room for illegals.

The thing is, on April 4th, which is yesterday the Lame Cherry found a Politico article, which has Jared Kushner and numbers of Mike Pence appointees plotting this summer to legalize more than the 1.5 million more Trump Visa Vermin pouring into the United States.

See that is the language I don't get, because in California Donald Trump is full up on illegals, but in Washington, the son in law Jew is preparing to dump more legalized illegals into the United States as Kushner, Pence and Trump say there is not enough vermin.


Anyway here is Donald John telling the Trump clappers bullshit which they are sucking through a plastic straw as the green kookade is all tapped out. President Trump Issues New Statement to Illegals That’s Guaranteed to Trigger Leftists: ‘We Can’t Take You Anymore’; ‘Our Country is Full’; ‘Turn Around’ ‘HILLARY 2.0’: Ocasio-Cortez Speaks To Black Audience In Accent, Gets Accused Of Racism

I really do not care that Hot AOC is doing Nigger Speak. I am more interested to know why no one on the right is hauling ass on President 45 who either has no idea what the hell Mike Pence and Jared Kushner are sabotaging him, or this President 45 just lied to his clappers again, in MOVING THE BORDER POSTS A YEAR AHEAD FOR MEXICO TO STOP THE INVASION OR TRUMP IS GOING TO PUT TARIFFS ON MEXICAN CARS.

All Donald Trump does is deflect and delay, and the same Barack Obama policies on invasion keep in place, like all of Obama's policies are in place.

So April 5th, had Alexandria Ocasio Cortez doing Nigger Speak and I don't know what language Donald Trump was spewing as he talks different in Washington than he does with the Clap in the hinterlands.