An Adult in the Room: Attorney General William Barr 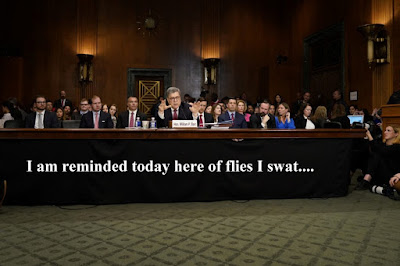 After the typical performance of democrats running for 2020 elections in turning the review of the Mueller investigation by Attorney General Barr, I would think if democrats had any sense, they would be scared shitless, because William Barr seems like a gentleman who would bring the entire weight of the Department of Justice upon any democrat who has ever bothered him, if provided the opportunity.

The Attorney General is not a vindictive man, but he is an intelligent man who reminds me of the genius sitting on his porch, swatting flies as his mind contemplates great things. In this case, the flies are democrats and the great things are those things which are in the AG's mind. 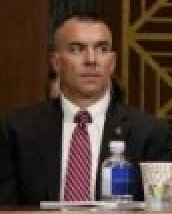 I did pay attention to one thing which mattered and that is Mr. Barr prefers to send the message that he has Marine Corp professionals as his assistants, even if he has pretty faces around him. Those are the faces which he presented deliberately behind me, and that image is one of a crushing blow of force which he appears poised to unleash.

There is not any bluff in William Barr. He does not need to bluff. He is an established force, and quite deliberate in understanding the crushing authority which he is as a prosecutor, to Robert Mueller being an investigator. For the fear and terror Mr. Mueller, as the protector of America, has unleashed in protecting the Missing Link, on the lesser men and women of the Star Spangled Banner, William Barr in his statements schools and understanding that he is man behind the desk, and Robert Mueller is the delivery boy.

Robert Mueller's "investigation" of the thin air, is the emptiness which democrats have inhaled in volume. The real weight in this match are not only the investigations which are unknown by William Barr, but the coming Inspector General's report.
That report is the one with teeth, now that Mueller's was defanged. See Robert Mueller know that he had an empty box and tried to fill it with people who brought their own rope like Roger Stone. William Barr is the Attorney General, as the powers that be have a real agenda which they have been engaged in for a number of years, who has a mission beyond common understanding. Today it was proven that he is the human and the monkeys behind the zoo bars are in Congress.

When the recommendations of criminal prosecutions appear, the Attorney General will have Grand Juries, (plural) convened. Something that none of you have figured out, nor Kushner media at Cuckservitude Treehose is Robert Mueller had a number of kangaroo courts convened to hang Donald Trump. Those Americans could have indicted Trump's hair, but they would not. See the real castration of Robert Mueller is he could not get rigged courts to indict, that is the damning reality if Robert Mueller was forced to submit this whining report of innuendo, because the real power of the Grand Jury was protecting Donald Trump.


I would not want to be a democrat screwing around with William Barr, for the real reason these twat minds have been involved with John Kerry framing of Donald Trump in document leaks, and are now thinking this is 2020 elections for political donations, when every one of them has been in collusion.


The worst of this is that petty despot of the House, threatening the Attorney General. William Barr is not someone to be trifled with nor smeared as Richard Blumenthal did. The challenge in this now is for the Attorney General to ensure that history vindicates him and shreds democrats, and nothing would do that more than sending numbers of them pound their ass prison.

Democrat Dick Blumenthal, Who Lied About Serving In Vietnam To Get Elected, Tells AG Barr: “I Think History Will Judge You Harshly”


AG William Barr: ‘We Were, Frankly, Surprised’ That Mueller Would Not Decide the Obstruction Issue

Remember in this, that the powers that be, have decided upon the re election of Donald Trump. A great deal of this witch hunt was to  transform Trump into their man. They have not only investment in this, but now are involved in protecting this President, and 2020 is an issue, and no greater issue of the 2020 campaign will be the unsealing of indictments, working their way up the food chain.

The real question in this is, "Who will roll first, in Bernie Sanders confirming he threw the 2016 DNC primary in collusion with Hillary Clinton or Joe Biden will confess that Barack Hussein Obama was directing this for his legacy, in order to save themselves".
In this clockwork orange, who is already sweating it out, looking to roll on their superiors to save themselves.

It is comforting in what appears to be beginning, in this small soul of Lame Cherry, having an adult like William Barr in the room. For some reason, democrats in Congress do not yet seem to comprehend how naked they are, even if some of their comrades are sweating it out.

Democrats should not be reminding this adult where they live.