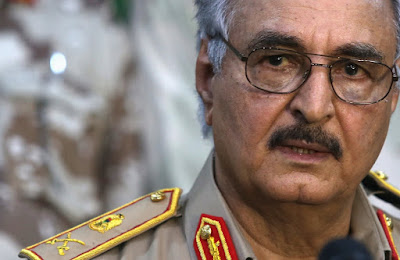 I am going to prelude this with, I have nothing against Carl Haltar, because he is necessary in Libya. I know most of you have no idea who this guy is, so I will inform you, and you can read the myriad of links about this man as everyone is quite interested in him.

You know I used to get all these assbrains bitching about where I got my information from, in they wanted links, so I do the work and put up the links, and these assholes still are not donating. More excuses that they will be judged to hell for before Jesus the Christ as stealing from me, is stealing from Jesus as this is the Inspired work of God.

OK I am going to do the thinking here for you again, as that will save me time, in telling you a story.

Once upon at time there was  Colonel Khadaffi, who ruled a very happy Libyan people. and who was reforming under George W. Bush. The problem is a bunch of fuckheads in that Jew Nikolas Sarkozy of Libya, those fags of London and that Birther Obama wanted Libyan oil and to boot Moscow's ass out of Tripoli.
So they sent in George Soros with NGO's to convince Khadaffi to let his terrorists out of jail.

One of the Khadaffi supporters was Haftar, who was pissing around in Chad or something and got his ass thrown into prison. Khadaffi denounced him, which in turn had him pissed off as was intended, where Haftar became a recruit for the American CIA. This was during the Reagan era, as in that period the Mosaad was blaming Khadaffi for everything. So Haftar was given CIA arms to invade Libya as Reagan bombing Khadaffi did not work, but it did blow up one of his adopted daughters by a US F 111 out of England.....also killed a son of Africa American pilot, and Khadaffi turned the body back over to the United States in good statesmanship.


The Renascence Man of Italy


You probably remember the result in Hillary Clinton cackling over ass rape and bullets to brains of Colonel Khadaffi, and the ass rape of fag Chris Stevens in Benghazi, covering up Obama arm shipments to Syrian ISIS to start another civil war there, but you probably will need to be reminded that it was Nikolas Sarkozy the President of France who ordered the French CIA to put a bullet into Khadaffi after he was ass raped and beat up.
Khadaffi knew Sarkozy's secrets, and by this time France wanted Libyan oil, wresting it from the Italians, and with the British Petroleum getting the deep water drilling contracts in the Libyan Gulf, as Obama had BP sabotage the Gulf of Mexico wells, which coated Republican Gulf States with sludge........you get the idea that some people are expendable by those with the guns.

As the terrorists in charge of Obama's community organized communists of Libya were bad for business as you can't control a country by committee, there entered a major change with the Habsburg diplomacy of Chancellor Sebastian Kurz. Suddenly in Benghazi, Haftar became a leader, and a chosen leader of Libya. This was the work of Kurz, who flipped the CIA's man and made him  a Vienna Man.

The Little General Who Would Unite Libya for Saudi Arabia

I keep telling you to watch Sebastian Kurz as he is ten steps ahead of Donald Trump. Kurz undercut the entire Obama criminal syndicate in the Mideast, cut out Jared Kushner, brought in Mosaad, the Egyptians and Saudis, and in the end the Saudi's are bankrolling a Libyan civil war led by Haftar, and Egypt if providing full logistic support.
Unlike Bush, Obama and Trump wars though, Sebastian Kurz not only dumps the African invading vermin back to Africa, but he gets the oil.

Did not his poor orphan girl tell you that Sebastian Kurz was going to annex Libya, for the oil and gas there as personal wells for Europe, in order to keep America from being an energy whore for Donald Trump's Oil Barons and to not make Europe dependent on Moscow oil and gas? Sure I did, and sure enough just as predicted Sebastian Kurz established that fact quietly and successfully.........and Europe did not pay a cent nor did Europe endanger one European Soldier.

Think of that when Clinton, Bush, Bush, Obama and Trump go to war, they pay for it, have to do the fighting and get no oil out of it. The world would be better of if Sebastian Kurz was Fuhrer of America as Americans would have their cheap energy, good jobs, and be free of vermin.

The thing in this which is sweeter than nectar off of a German mountain flower is that Sebastian Kurz in all of this has corked the French back into their Paris hole. This is German led diplomacy now, without Paris intrigue or English enigma. That is why it is working and why Americans are not getting killed.

What really should be done is when Chancellor Sebastian Kurz installs his Field Marshall into Libya, that the Libyans indict the image of Obama, Tehran Terror Queen Jarrett and the cackling Hillary Clinton on crimes against humanity and Attorney General Barr will extradite the Trump trio nemesis to Benghazi where they will be convicted and hung or whatever Libyans do to war criminals.

As an additional note in this, the seers have mentioned Libya, as much as the Bible in the future. It is probable that Haftar with Egypt will join in a Pan African Dream that Khadaffi wanted to a power force in North Africa. That will buck the Europeans and bring about an invasion to swat these swarthies down.

Again, you should have been paying attention  to all of this, and I would pay more attention if those rich people would find some humanity in donating big here, instead of being Hillary Clinton in thinking all of this is for free.