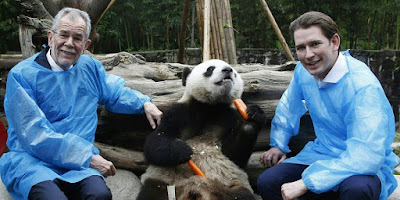 As another lame Cherry exclusive in matter anti matter.

Can you really take Donald Trump seriously in Chincom sanctions, when you realize that United States farmers were bankrupted by Trump Trade Wars, but in this time of embargo sales, a cartel in North Dakota was selling soybeans to China and Donald Trump himself, later in all of these Trade Wars sold tons of soybeans to China, making Trump's trade wars on China, a Soft Trade War.

But while all of this Trump Trade Wars was taking place, someone else was not sitting on their Mar Largo, and once again moved fast and successful to put the European Super State brand on China. Yes Sebastian Kurz has South Asia, Africa, Russia, Europe and the Mideast, as America continues to be shut out of these markets.


Kurz said Austria is an important hub between East and West and has an observer role in the 16+1 cooperation, a platform for cooperation between China and 16 Central and Eastern European countries. "In this role, we are following the ongoing developments with great interest," he added.
...

As Austria prepares to take over the rotating presidency of the EU in the second half of this year, Kurz said his country will promote constructive and intense EU-China cooperation, for example, to push forward the negotiations for an EU-China investment agreement.

China appreciates that the new Austrian government led by Chancellor Sebastian Kurz has for the first time written into its ruling programme the contents of actively developing relations with China as well as the "Belt and Road" initiative. China is willing to, together with Austria, jointly tap and release the potential for bilateral cooperation and sow more seeds of friendship and cooperation, so as to better benefit the two peoples.


Kurz has played the Belt and Road gambit in knowing that China will bite on anything it sees as it's global domination, but like as in all extended roads, Sebastian Kurz knows that distance loses control in every mile. Kurz also fully knows that Europe in the short term being a market to offset the United States, causes more friction between Peking and DC, and if a war foments, it will be China being crippled as the United States, and with European technology replacing American, and European finance replacing both Chinese and American to rebuild China, Europe is the winner by having two competitors take each other out.

This is what leverage looks like in having opponents press against each other. China must be strengthened in order to provide the Americans something to play with, that is not Russia and scorching Europe in that war.

The great software pirate Chicom conglomerate Huawei, is being brought into the fold of Europe as America is striking at it. Huawei makes spyware and inferiorware, but in the short term to make the German trains run on  time at a gearing up price, the Europeans are willing to succor Peking, as Sebastian Kurz already has South Korea and Japanese contracts, to replace the Chineseware in their superior work.


But most importantly, despite US insistence, so far there’s little evidence to suggest Europe will shun Huawei. In fact, as Bloomberg adds, the national railway companies in Germany and Austria have bought the company’s equipment, and carriers such as Deutsche Telekom and Telefonica are running 5G test projects with its products.


The first salvo against Trump's diplomatic effort took place last month when the U.K.’s spy agency indicated that a ban on Huawei is unlikely, citing a lack of viable alternatives to upgrade British telecom networks. Next, Italy’s government also dismissed U.S. warnings as it seeks to boost trade with China. In Germany, authorities have proposed tighter security rules for data networks rather than outlawing Huawei. France is doing the same after initially flirting with the idea of restrictions on Huawei.


The world is a 5G world and 5G contrary to what everyone is focusing on, is not wetware networking, but instead is for warfare. 5G is for the day of the machines or the cyborg technology of a living computer system which is a billion times faster than humans can even think. 5G is the revolution of the robotic age to serve humanity in their commerce, traffic and security. 5G is the mammary nipple of the 22nd century human having a silicon slave class. 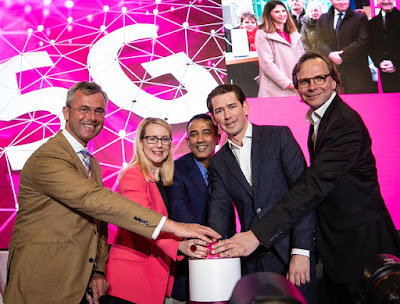 Today Margarete #Schramböck, @norbertghofer and myself, together with the management of @TMobile and @deutschetelekom AG, announced that #Austria will become the #5G pilot of Deutsche Telekom AG.

#Austria is the first country in Europe to have a #5G network as of today - an important milestone for our #competitiveness, our technological advancement & for the #qualityoflife of Austrians.


The reason Austria has moved to 5G is 5G dominates. Austria is not the Habsburg Royal Head of the Beast, Austria is the Royal Brains of the Beast. Sebastian Kurz is not building 5G for Europe domination alone. Sebastian Kurz will from the central plasma bank of Austria be the internet connection for the hubs of the world.
Kurz will become the OPEC of information, as it is all information from banking, mail, communication, cargo, travel. The coming divided China will be just another grey matter lobe of the genius of Sebastian. 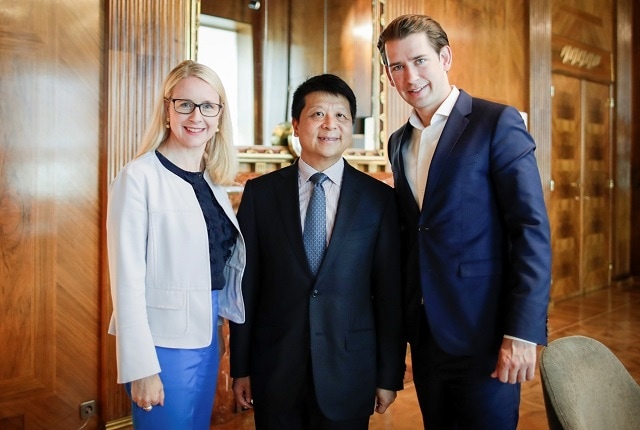 "Austria has a long tradition of R&D, together with strong basic research capabilities and top-class talent. These attributes are very attractive to innovative companies and are also the reason why Huawei is investing in Austria."


Federal Chancellor Sebastian Kurz said：“We are determined to make Austria a leader in digital transformation – in business, research and public administration. I am glad that we can count on international partners such as Huawei, who decide to invest in Austria and create jobs for the future. It will be to our mutual advantage.”


The Chinese are simply a breach cork in the European system to allow Europe to buoy itself and evolve to a superstate control. A leap frog off American technology, to gaining control, replacing this with high quality Japanese and Korean technology for the monopoly of Vienna.
Once Europe moves past the challenger to the ruling interest as the United States contends with nuclear aboriginals of Moscow and Peking, the die will have been cast. All roads will lead to Europe and it will be European 5G.

Italy is the target in this component, in replacing Amsterdam in the west. Control the Suez from control of Egypt, the choke point of the Mediterranean, and in the end the production cancer of China, will be dominated by the finance and power of European control. This beast is an evolving creature of Europe. The Chinese dragon is not being invited in to ever dominate Europe. China is being fed now to be a protagonists of the United States, and once China's purpose has been fulfilled, the body of the dragon will be divided to an order before the Chin for Austria to manage.

Essentially, it’s all about Italy – the number three European nation on naval trade – configured as the top southern European terminal for BRI; the entry door for connectivity routes from east and south while also serving, in a cost-effective manner, scores of destinations west and north.
Absolutely key in the project is the current revamping of the port of Venice – channeling supply lines from China via the Mediterranean towards Austria, Germany, Switzerland, Slovenia and Hungary. 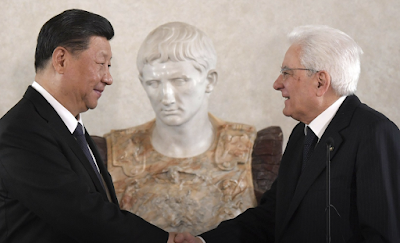 Who is the real Caesar?


The real Caesar in this is Sebastian Kurz. He operates quietly from the backrooms, already having won before he announces a policy which no one comprehends the essence of that has evolved. There is an absolute in this, if Sebastian Kurz  has anyone doing something, it benefits the Habsburgs and the SuperState Beast of Europe in the replacement of the United States. All of these gremlins think they are going to rule and eat caviar, when there is only one throne and Sebastian Kurz will be lord upon it, and be the one dining on the victuals of these nations.

Yes and an amazing thing took place in Boeing just happened to have problems with the 737 jets crashing, and who helped in ruining Boeing but Donald Trump as he has a 757.  Airbus in the Europeans replaced Boeing and in most things attached to Donald Trump, he was not even aware that Sebastian Kurz played this old man like a violin. Trump had a Boeing so he would be worried about his Boeing crashing, so he moves to ground all Boeing's, trashing the American FAA.
And what was Boeing's problem but a software problem which appeared as if someone had exploited that problem to crash a few jets to make profit for Airbus. Sebastian Kurz touches a string and Donald Trump jumps.


Airbus SE secured a $35 billion jet deal from China during a state visit by President Xi Jinping to the French capital, dealing a blow to Boeing Co. as it grapples with the grounding of its best-selling jet.

Nothing is being accomplished in Trump Trade, because Trump keeps giving China what it wants in soybeans which  Trump thinks is a bribe, but Peking sees as Trump weakness, as each meeting accomplishes nothing and meetings are punted to the future, Peking smiles as time is on Peking's side. The day the American markets implode or a terror event takes place, gives Peking the leverage to push the Americans off further, and Peking knows it's ace in the hole is Vienna, which is running the board in this game.

A proposed summit between President Donald Trump and China's Xi Jinping to end the trade war may be pushed back to June, the South China Morning News reported Saturday. The proposed meeting to sign a trade agreement at Trump's Mar-a-Lago club had originally been targeted for March, then pushed back to April amid slow-going in trade negotiations. The SCMN reported the April target was now looking less likely.

I would that President Donald Trump had listened to the advice of this blog and stayed Protestant Christian and loyalists, and he would have produced the America he promised, instead of the isolated America, growing weaker by the day, as Mr. High Rise imports more foreign vermin to cripple the US economy.

This is nothing to celebrate in the problems Donald Trump is creating by being played in this, as this will end badly. Sebastian Kurz is playing the China card and Vienna has won the game.
China is sending forth Venezuelan rape cock to America, and in a coming annexation of Alaska, American women and boy butts are going to discover how raw and raped their genitals will become in this invasion. The smiling faces will all be gone as America is pinned down by imported vermin and beach landings in battle zone America. 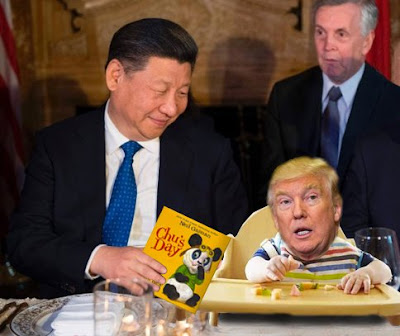 Trump: "No summit until we have a DEAL!"
Xi: "Have your Mar-a-Lago chocolate cake and eat it too, I'll only show up to a summit with the grownups in DC or in a neutral country, like Austria."

Donald Trump in his national  socialism is not a match for Sebastian Kurz's global socialism.