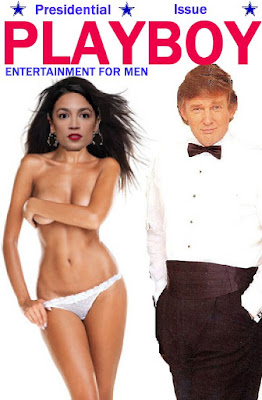 Apparently Alexandria Ocasio Cortez had a bad propaganda moment and is threatening through her personal photographer people like Alex Jones from showing these photos which show she was staging media events.
Apparently that posing of dead Latins on the Rio Grande inspired AOC, but there were no dead beaners around, so she just went with the photo that everyone wanted, and that is AOC in virginal white. 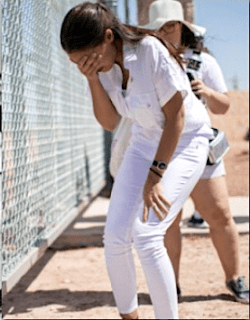 See AOC posed so you would see how hot she was, compared to that fat beasty thighed thing in back of her. Always pose with a thing that has testicle hormones so you look even more centerfold.

Here is the photo from the backside by the timber thighs for the people on the special list. 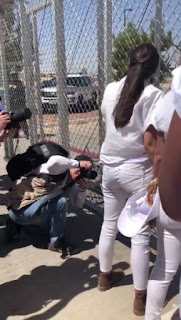 Sister AOC has the complete package in one nice ass. Put her in some fag Levi's and she could sell jeans to straight people. That is one fine package.

Here though is the real picture of what AOC was fake weeping over.

I think Trump voters should be weeping as this is pretty much what Trump's border fence is in being a half assed thing.  I mean what kind of  fence has a space underneath that AOC could shimmy under it if she could not figure out to just walk around the part on the road with no fence on it.

If you do a search for AOC, what drops down in the top menu is Alexandria Ocasio Cortez BIKINI. It is time that AOC loses her Kodak virginity. Now we all know she has taken selfies, and this is what the public wants. She will make more headway on open borders if she would just do some pin ups in Playboy. She would wrap out the DNC nomination in blowing out brain blow Biden and that saggy old Kamala Harris.

It was foolish of her to call for her close up now, and not have a dead body to cry over. I mean she is a hired CIA operative, who is supposed to make Obama Marxism look foolish to split the DNC in Nazi votes for Trump and Commie votes for Bernie. There are lots of dead Mexicans, so how hard would it be for the CIA to just sort of pose one half buried with a donkey doll or something, and AOC could be going for a stroll like Bill Clinton was on Normandy beach setting up flags he tipped over desecrating them, and AOC could find the dead beaner kid, holding the donkey doll, and then bend over with her centerfold bum for the camera to focus on, as she wept.

She would have the nomination wrapped up and have Don jr. proposing in 10 minutes in being Don sr's new daughter in law. It is just win win I tell you, in Trump, Don Wins, and Ocasio Cortez, Don wins as his daughter in law would be President. He would be assured of a pardon more certain than with that shifty Mike Pence.

Let the Presidential Issue of 2020 be, will democrats vote for Donald Trump or Alexandria Ocasio Cortez Trump? 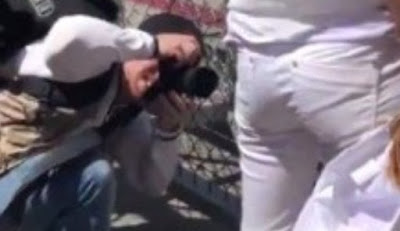 What I want to know where are the money shots of AOC's camel toe as she had her personal photographer taking them. Michelle Obama needs to share the AOC wealth.