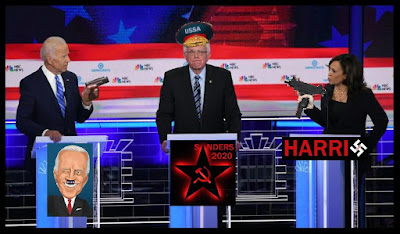 It got pretty rough at the Democratic Debates on FOX as Kamala Harris told Joe Biden, "No I do not believe you are a racist", to which old Joe replied, "My time is up".

I believe  though these American socialists are communists in the horde of the democratic party are not living up to the standards of Stalin, Castro, Mao, Pot as any of these leaders would have gone through this crowd like shit through a goose. I mean all these leftists do is talk about stealing people's money, while Obama had Chris Steven's ass raped, Andrew Breitbart puffy pink on the street and LaVoy Finnicum froze in the snow....and as I said all this crew does is talk.

I think with like 5000 candidates in the DNC meant to hand whoever Obama picked from the grave to be their nominee, should follow the Obama tradition and even the score as it is proof now that Biden's brain is too old and Sanders is too geezer to hold anyone's attention, while Buttocks, Beto and that other fag in Booker are too girly to stand up to these Michelle Obama bulging vulva females like Elizabeth Warren and Kamala Harris. So to even things out these communists and nazis need to take one last thing from America and even the field in Sam Colt tradition in handing out guns to all 5000 candidates and see who makes it out alive.

Shouldn't America voters have at least the chance to the same kind of leaders who have killed millions. I mean America needs more than a few dead around Hillary Clinton, or the blase infanticide or rationed death in Obamacare, as liberals wait around for someone to die in these debates from old age or a rabid mouse giving them cancer.

I think arming the Democratick Legion would reveal a great deal more than the debates. You could see who would make good diplomatic policy like in North Korea. You know you could See the 3 B's piling their podiums together on stage as a bunker and agreeing to take out the front runners, for the first Tri Presidency.

You know that little blonde from New York and that horse face woman from Minnesota would make a pact of pulling hand grenades out of their bras they smuggled in, and fragging Kam and Poco.

See how this would be great television and you would get the real Stalin and Hitler in this midst or more to the point, they could get their gun bloodied early, so when they needed to start a nuclear war, their fingers would be lubed for the nuclear button.

I mean this is not the good olde days when John Kennedy could buy an election or Bill Clinton could bed his way to the White House. There simply are no candidates who can pimp or pander their way to this nomination, so I think we need to arm the democrats, and if they do not want the White House bad enough to knock off their rivals, then they don't belong there, because Obama called out the Nigger Thugs to steal the nomination from Hillary to terrorize her weak voters, and we need that kind of thing on stage, not hidden away in the backrooms.


Let's make this a real concentration camp America, like FDR did the Japs, Hitler the lower  order and Stalin did the Slavs, as legion is for demons, and democats need a real traditional butcher to lead them.


Kareem Abdul-Jabbar: Dem Debates
An Embarrassment, Trump Won
Daily Wire, by Paul Bois Original Article
Posted by Imright — 6/28/2019 6:19:22 PM Post Reply
Basketball icon and vaunted social justice warrior Kareem Abdul-Jabbar came away furious from the first round of the Democratic Party's presidential debates this week and proposed some remedies to prevent his ire in the future.(Video) Writing in The Hollywood Reporter, Abdul-Jabbar had nothing positive to say about any of the candidates this week and declared Trump the winner to what he described as a game of "Presidential Musical Chairs."