Donald Trump in Hats and Tails 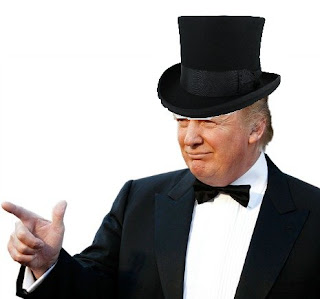 The reality is the long knives are out for John Bolton in this time of another Iranian Crisis, and that is not what the United States need in this time of the Cloak and Dagger Renaissance of Trump Trans, maneuvering to be the next acting president in Trump WWE Re election Theater.


A senior White House official told CNN Thursday ‘it’s Bolton vs. Trump on how to proceed…Trump does not want conflict. Pompeo, Pence, Esper are ‘swing votes.’ Pompeo is ‘a triangulator…the goal is re-establishing deterrence, but that is still very risky.’

It is always remarkable that traitors in the United States inform American adversaries, the exact workings of the current President, in Sean Homo Hannity is not getting the cuddle calls, but instead Tucker Carlson of the Mitt Romney wing of the GOP is the Trump advisor of the moment, a we now are informed that the lying cheating former CIA Director in Mike Pompeo who lied to Trump for the Ivanka Tears Tomahawk chop attack on Syria, has Vice President Mike Pence sniffing his ass, as Esper joins in with the "Let Trump Take The Blame" as we offer wait around the whore house advice,  as John Bolton is isolated on his pressing of Iran to gain a solution.
The end result is Iran  has just been informed that Pompeo, has supplanted Vice President Mike Pence and his sock puppet Mark Esper of the Pentagon in a DETERRENT strategy.
Deterrence like the Cold War, means Americans are bled around the globe of money and blood, while the Soviet Union creates problems for the United States while becoming more dangerous. Deterring Iran, leaves an Iran with ample oil, nuclear weapons, projections of power, terrorism, and nuclear armed allies of China and Russia against the United States. That is exactly sleeping with a loaded nuclear weapon under Jew York City.

For those who require an explanation of why I use the term Jew York City, it is not anti Semite, but the fact that the greatest concentration of Jews in the United States, which Tel Aviv detests as they want a say as to what happens in the Jewish State, are in New York City.
Muslims attack New York City, not for finance alone, but because of Jewish finance, and as a way to strike at international Jewry, without hitting nuclear Israel. The prime target of Iran are the financial stronghold of America which houses the concentration of Jews, in order to inflict as much real damage on its two adversaries in one blow.

As the Pompeo Patricians perform the 3rd coup on Donald Trump in this faggot mafia of Pence from Indiana on the inside and Lindsey in the gay ear Graham of the Carolina mafia on the outside,  America has had designed for it the exact policy the cartel desires, and that is to wait around for Iran to be blamed for making a nuclear strike on America. This is the old communist Franklin Delano Roosevelt doctrine in pissing on Germans and Japanese to prod  them in  sanctions and bombings to attack the United States, so the unwilling American Citizen would be forced into a war that Roosevelt's cronies desired.
Pompeo deterrence will bring a nuclear attack on the United States as certain as the corner Obama painted John Bolton into, as Iran has nuclear weapons.

That is the great blunder of Conservative Victor Davis Hanson in  his analysis of  this situation and stating that the United States has all the cards in this Iranian Gambit.

Of course, Tehran may try to stir up trouble with Israel through its Syrian and Palestinian surrogates. Iran may in extremis also stage terrorist attacks in Europe and the United States. And it may lie that it has already developed enough fissionable material to launch a nuclear missile.


Hanson after making the ludicrous judgment of America holding all of the cards, then states the fact that Iran may stir up trouble for the Jews. MAY, is ignorant in Mr. Hanson's debate as Iran has been stirring up trouble in Lebanon, Syria, Yemen with effective results.

So Iran is already on the move, and Iran has sleepers across the globe, many in the United States and South America. For a refresher Vice President Dick Cheney in the final months of the Bush43 administration, unleashed hit teams on FARC in South America, the Narco Communists, due to the fact that Iran was attempting to sell them weapon's grade uranium for an attack against the United States.
For this continued whistling through the nuclear graveyard, ignoring the realities of Nuclear Iran, it is of zero benefit to the security of the United States.

Iran has been refining nuclear material for 20 years.


History reported that after Bush41 and the Clinton's looted Russia after the fall of the Iron Curtain, the KGB sold Saddam Hussein one heavy nuclear warhead, too big for his Scud missiles and sold an assortment, numbering about one dozen artillery and warheads to Iran, as a deterrent to American in the nuclear Jewish region of Tel Aviv.
In response to this, America signed off on Sunni Saudi Arabia funding the Pakistani nuclear bomb project to be armed with nuclear weapons without admitting to it, in order to deter Iranian Shia nuclear arms.
In response to this. Iran with Russian assistance, began manufacture of the cumbersome Hiroshima type bombs, and have since upgraded to missile warheads.

It comes to the point Victor Hanson  stating that Iran may "lie" about having nuclear material is not the reality. Iran's allies have nuclear bombs, so Iran has nuclear bombs. Iran had enough material out of the Asian stans to offer it for sale to FARC. Iran has the material and Iran has been pissing on Donald Trump to goad him into attacking Iran to America's harm.

This blog has posted on the American and foreign personnel were evacuated from Iraq. The reason is Patriot Missiles will shoot down Iranian missiles in the arc launched at Israel and they will fall in Iraq. As bunkers will protect embassy personnel from conventional attacks, that points to there is something on the Iranian Shahabs  which are not conventional. in why America removed it's people.

Those facts can not be changed even if everyone is whistling through the graveyard, as the Tucker Carlson faction wants to keep making Iran so desperate in sanctions, so that Iran will attack Jew York City.

What is taking place is what Bill Clinton's mad general, Wesley Clark posted to Youtube in several Mideast nations were going to be toppled, and the last two are Lebanon  and Iran, for the interests of the cartel. There is zero interest for the United States to be on Iran's doorstep as there is not any American national interest in Iran.

The United States has enough oil and gas for 200 years as America has the largest reserves in the world. The Persian Gulf ships little oil, and ships mostly refined hydro carbon solvents. The oil and gas flow in pipelines across the land.
Iran is facing a population implosion in the next few years. It has oil reserves, but it's oil production is  lessening at 8% per year. It will soon not have oil to pay it's bills  or keep it's people that Obama led out and helped kill off in his Iranian uprising, from a revolution.
China is facing the same population implosion and has no resources.  Russia faces a population decline, but has the resources.
Time is on the American side if Donald Trump protected Americans as Sebastian Kurz of Austria has been protecting Europeans. Time is on the American side if Donald Trump would stop FDR policies to produce a nuclear attack upon the United States.

The regime in Iran was installed by British MI6 as Jimmy Carter helped oust the Shah of Iran for Zbigniew Brzezinski Militant Islam to make war on the Soviet Union. That was in retaliation of President Eisenhower toppling the British control of Iran for the Shah.  That is why Iran exists and no one has taken Iran out.

Iran though has unique military problems for the United States. It has barely 72 hours of targets for America to hit, and then it will be bombing rubble. Iran has vast regions of rough terrain suitable for guerilla warfare. Striking Iran is easy, toppling it or holding it would be treacherous as Afghanistan.

What is taking place now, is Iran is backed by Russia and China. It is in dire economic straights, but the  regime will not be toppled. It will be pressured as Japan in the prelude to World War II, to being left with the only option of striking the United States in the lower 48, as the Americans have offended numerous factions and there are numerous factions who would prefer America was juggling a series of 9 11 events. That includes the coup plotters of London in Theresa May against America.  The European Union. China and Russia. Iran is a convenient martyr in this and this is the real danger of the Trump policy in Obama allowed the nuclear fangs of Iran to become nuclear teeth, because the world is at that juncture again of massive debt,  the need for realignment, hiding the cartel criminals, and cropping populations massively before they figure out to rise up and hang the scoundrels.

Victor Davis Hanson appears to have a bi polar mind in this, in he keeps stating America holds the cards, but then states that Iran will escalate. If America had all the cards, Iran could not escalate. Mr. Hanson apparently knows he is spewing propaganda and lying, as he warns America to not go to war with Iran.

But the truth is that America has all the cards and Iran none in its game of chicken.
Because Iran is losing friends and money, it will have to escalate.


America has been at war with Iran since the Jimmy Carter Hostage Crisis. America has bombed the Iranian Navy. America created Stuxnet computer virus for the Iranian nuclear industry.  America under Bill Clinton covered up the Iranian downing of TWA flight 800, as Clinton did not want a hot war with Iran,  because that would interrupt the black market bribes coming out of Iran for the cartel.

The world is moving past all of that now, to a time of nuclear terrorism. Sanctions do not work when Iran is receiving succor from the Jews, gold from Venezuela, money laundering from Turkey to UAE, and cash from Europe and China, with weapons upgrades from Russia. That all indicates that the cartel desires a war to gain placement and to displace the United States as the mid 21st century dawns.

Everyone has their Mad TV Stuart Moment


I have posted enough solutions in all of this that I will not repeat them. I was offended in the attempt to handle me for crumbs. I will not cheer lead incorrect policies that endanger the United States, as this President has not fulfilled one promise in what I expected in no one paying income taxes who earned under 50,000 dollars, a Constitutional Carry law, the end of Obamacare, and peace with Russia which would have solved 100% of the Iranian problem.

I am through working for nothing and at this critical juncture of world history, the rich portfolio queens can deal with the consequences of not donating.

I am done saving people who do not appreciate it and who have left me dead along side of the trail.

Donald Trump will discover that the reasonable North Koreans are not the unreasonable Iranians, and that his policies are not Ronald Reagan's for peace, but FDR's for war.