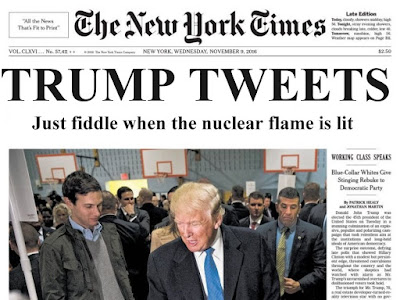 Before Donald Trump became the Defense Intelligence candidate to be President to neutralize the British installment of Obama Muslim Marxism overthrow of the United States, Reverse Speech expert, David John Oates, found several examples of Obama, Jeb Bush and Hillary Clinton speaking of Europe being "scorched earth" in a war with Russia.

The realities of Russiagate in creating tensions between Moscow and DC, has not ended with the Mueller Report conclusions, but have the same cartel still pushing for that war between the United States and Russia, to be fought on Slavic lands.
The latest joust for the regime change in Moscow, which will be the confiscation of Russian raw resources, along with the billions in gold to be acquired in victory over Moscow, has the New York Times CIA front page claiming that the United States CIA has been unleashing cyberwarfare on the Russian energy grid, and the punchline is, they have not informed the President that they have been involved in these criminal acts.


Did the US Recycle a Bush-Era Plan to Take Out Venezuela's ...

https://www.mintpressnews.com/did-the-us-recycle-a-bush-era-plan-to-take-out-venezuelas-power-grid/256113/
Did Trump and His Neocons Recycle Bush-Era Plan to Knock Out Venezuela's Power Grid? Even as the Venezuelan government blamed the recent power outage on U.S.-led "sabotage," the U.S. has ...

'Operation Blackout is underway': Russia blames US for ...

https://www.theguardian.com/world/2019/apr/23/operation-blackout-is-underway-russia-blames-us-for-venezuela-power-crisis
Apr 23, 2019 · People in Venezuela collect water from a leaking pipe during rolling blackouts, which affects access to running water in Caracas. Russia has blamed the US for the power crisis.

Notice in the above, the Bush fam is the progenitors of this original criminal act, the Bush fam CIA, and Russia was already positioned to blaming the United States for the events in Venezuela.

The New York Times has stated in print, that the American CIA is running operations from the Bush family, which are acts of war, against Venezuela and against Russia, and these CIA operations have decapitated the authority of President Trump, in the President is no longer in control of United States foreign policy.

In reading between the lines in this, the Lame Cherry can explain this beyond the Times in their propaganda to start a nuclear war in this world. See the above is designed to alienate the Russians, so Russia will not inform the United States of intelligence of WMD operations which are being generated against the  United States by 3rd Party Sources which Russia was assisting the United States before and after 9 11.
This projects out that there are NSA malware which is sleeperware which has been installed on every nations computer energy grid in order to shut it down in the advent of war. The United States has  numerous war game plans enacted as it is prudent. Numbers of nations engage in this. The Soviet Union actually planted nuclear bombs inside the United States in prepositioning in the Cold War.

See this is the lie the New York Times knows in posting this Mockingbird story. They have as the President has noted, engaged in treason, in revealing a trade secret. The President was not informed as the intelligence community does not have a President with time to inform that President of a thousand years of information, it would require to inform Donald Trump of everything the IC is engaged in. It simply never comes up, unless specifics in literal war, that the NSA has implanted all sorts of virus and malware into every thing from communications to nuclear missiles.
So the Times is fudging information deliberately, whose intent is to create friction between nuclear powers.

Ask yourself what happens, if on this information that the lights go out in Moscow, but this time an aircraft crashes, a train derails and there happens to be some notable Russian state leaders, by hook or by crook, what do you think the response will be from nuclear Russia?

Do you remember that reports surfaced of the US grid being hacked? Yes other nations do have the ability to install numbers of malware. Everyone focuses on EMP, but the fact is in hysteria of something happening in Russia, that the same John Brennan of the Obama CIA  types who just posted the Times story could indeed shut down the US grid and blame Russia.

China and the Power Grid: Hacking and Getting Hacked ...

https://www.cfr.org/blog/china-and-power-grid-hacking-and-getting-hacked
UglyGorilla, one of the five People's Liberation Army hackers indicted by the Department of Justice, reportedly hacked into the computers of a public utility in the northeastern United States ...


This is serious business and this President instead of tweeting about treason, has a responsibility to direct his Attorney General to indict those involved in this, as it is the Trump rich who are not standing up and donating to this blog who are the ones who will be the recipients of the coming response, as someone is giving Donald Trump a world war.

The  Jews gave Donald Trump Muslim land named after him and the Times a nuclear war. Mr. Trump has some interesting associates who act more like enemies.


…..ALSO, NOT TRUE! Anything goes with our Corrupt News Media today. They will do, or say, whatever it takes, with not even the slightest thought of consequence! These are true cowards and without doubt, THE ENEMY OF THE PEOPLE!
— Donald J. Trump (@realDonaldTrump) June 16, 2019