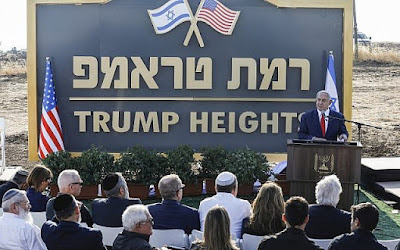 This is a lesson in Newtonian Cause and Effect, a mathematical equation. It involves pluses, minuses, multiplication and divisions.

Here is the problems which seems to end with the same equals sign.


So you have President Donald Trump, with his Jewess daughter and Jewe........what do you call a male Jew? If Negroid is Negress, then maybe a male Jew is a Jewoid. Well anyway, Ivanka is a Jewess and Jared is a Jewoid, and they have been infuriating numbers of Muslims in cutting them out of the deal from Iran, Gaza, Beirut and  Syria.

So Donald Trump somehow decides it is his authority to hand over Syrian land that Jews annexed like Vladimir Putin did in Crimea, called the Golan Heights.
The Jews then are thrilled in the President puts the US Embassy in Jerusalem and hands over Syrian lands, and they name a new Jewish settlement named Trumpland on the Golan after Donald Trump.


President Trump: ‘Great Honor’ to have a town named after me in the Golan  ∞ jpost

The thing in this is, is the Jews have gone on record stating that one of their enemies, Hezbollah of Lebanon has 150,000 rockets.

https://www.timesofisrael.com/israel-raises-hezbollah-rocket-estimate-to-150000/
Israel raises Hezbollah rocket estimate to 150,000 ... In light of the events in Syria and and the ongoing civil war, as well as the Israeli attacks on weapons convoys en route to Hezbollah, the ...


Then there is the Philistines  of Gaza.

www.israelnationalnews.com/News/News.aspx/208903
Hamas said to have fully restocked its missile arsenal. According to reports Hamas used around 4,600 of its rockets during the Operation, and another 4,000 or so were destroyed in Israeli strikes, leaving the terrorists with a third of their arsenal by the end of the fighting. But in the 18 months that have passed,...

So here is the math. No let us forget the math, as the question is what kind of insane Jew or a Jew with a death wish, would build a home in Trumptopia, move their beautiful Ashkenaz wife and their numerous children, with a target on them, not for just being Jews, not for the Kushner's screwing the whole peace thing up, but because you built your home in a placed named after the most hated man in the Muslim world, who just happens to be trying to put the Shia on the Sunni leash.

I mean that all looks worse for wear than wearing a KKK sheet in Harlem for the results.

There are going to be a passel of Muslims looking to take that Trump name off and put on Muslim Heights ASAP.

This is a really dangerous move by Tel Aviv for Jews and it is a shortsighted situation for this President as Stephen Miller should have waved this one off at the first hint of the billboard being printed up.

Oh  and how long do you think it will be, before the missile lobbers decide to bring the terror attacks to the United States for placing the name of America on a Muslim land? 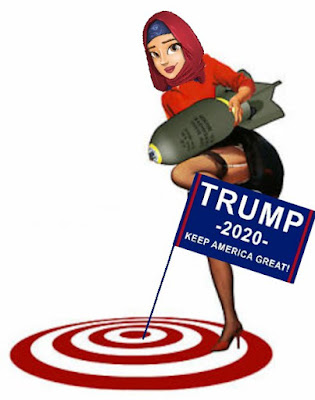