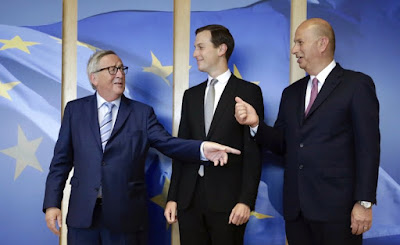 Kusher just sold me the same  Arabs he sold you....


If you have been reading the headlines of the Jared Kushner Peace in our Time for the Mideast, a common theme keeps coming up. One would think a peace summit would be in Jerusalem, Tel Aviv or Gaza, but instead Jared Kushner has brought his kind of peace to one of the great money laundering centers of the world in Bahrain.


Low-ranking EU officials are to represent Europe when America unveils part of its new deal on the Arab-Israeli conflict in Bahrain next week.


Yes, and as the below quotes reveal, that Jared Kushner is trying to bring in Europeans to underwrite his form of peace, which the Europeans do not want any part of. You can translate that as BRIBES. To gain Kushner peace, it apparently is going to cost a great deal of Euros to get Jews and Philistines to stop making war so they can glean billions from these same nations to make peace.

The US has also invited finance chiefs from some member states.

The French finance ministry confirmed last Friday that it had been asked to come, saying: "We are in touch with our partners, and notably our European partners, on this question".

Mogherini's directors dealing with the Middle East from Morocco to Palestine and Iran have held talks on the subject.

But EU foreign ministers did not discuss Bahrain when they met in Luxembourg on Monday and the EU has not coordinated member states' response to US invitations, a senior EU diplomat told EUobserver.

The EU delegation will mingle with a mixed bag of guests at what the US has called the "Peace to Prosperity economic workshop" in Manama on 25 and 26 June.

Kushner has promised a grand unveiling at the Four Seasons hotel of the financial part of Trump's wider "Deal of the Century" on the decades-old Arab-Israeli conflict.

The political part, on Palestinian statehood, is to follow in autumn.

He is also bringing the CEOs of US investment firms BlackRock, Blackstone, and Colony Capital and a senior executive from US investment bank Goldman Sachs.


See that is what is interesting in Kushner Peace in war between Jews and Philistines is making a whole lot of money in costing Americans and Europeans billions, but peace has a higher price tag apparently, which does not make any sense, but this is the Kushner who prostituted his wife Ivanka for China, sold influence to the President for his family and sold 666 real estate in a real sweetheart deal.

The nice touch is that this is the Marshall Plan of Trump Trans. Peace at the Kushner cost is Muslims paying American companies to rebuild the region. Rebuilding a region of terrorists to make them self sufficient terrorists who have oil revenue and probably things like Ford motor company and Apple computer manufacturing things to profit terrorists........oh and Goldman Sachs Jewish finance profits for all their investors.
That is kind of unique in it sort of corporatism of terrorism.

The Bahrain event comes amid EU and Palestinian concern that Trump aims to kick Palestinian statehood into the long grass in return for flashy infrastructure projects in Palestinian territories and other financial incentives.

It has been dubbed a Marshal Plan for Palestine in Trump circles, by reference to US aid to Europe after World War Two, but the model is different, with Arab states, such as Saudi Arabia to sign cheques for US firms to rebuild the region.

Palestinian leaders, Iraq, and Lebanon have boycotted the event and urged EU countries to do so in solidarity.

China and Russia have boycotted it.

Well of course China and Russia have boycotted as what kind of AK 47 bribes or Peking oil sales can compete with Kushner terrorists self funding.

Meanwhile, Israel's finance minister, who was to come, later backed out, amid reports that Israel was keen for the event to be a damp squib.


Ooops, the Jews are backing out, as Tel Aviv Jews are loyal to European Jews in the Rothschilds who want to own the Mideast, and are not at all loyal to Kushner Jews who are the Schiff's who want to own the Mideast, so now we have sort of like the Cold War or the Matso Ball War of European Jews and American Jews bidding on the same one of a kind item.

But she also promised that when they crossed the picket line in Manama it would not amount to EU endorsement of a US alternative to a future Palestinian state.

"Our Arab friends can count on the Europeans and the European Union to fully support their requests for ... the only sustainable and viable solution - that is the two-state solution," she said.

Jerusalem should be "the capital of both the state of Israel and the state of Palestine", she added, after Trump backed Israel's 1967 annexation of the holy city by moving the US embassy there from Tel Aviv last year.

"Participation at technical level at a workshop does not infringe on any of these very clear commitments", Mogherini said.

So Jared Kushner's peace plan is based upon European Jews paying for it, American Jews making the money off of American companies, and by selling Philistines it is supposed to make more money in peace than in war.

As the Europeans are not buying it, the reality is Jared Kusher's peace plan is going to not make the same profits as the war portfolio that Jews have been making money off of on Wall Street. 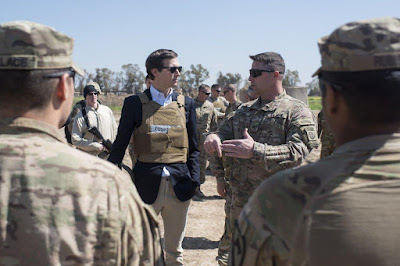 So like is a Gaza Muslim a stock option or a dividend?