The Delphi Field of Relativity 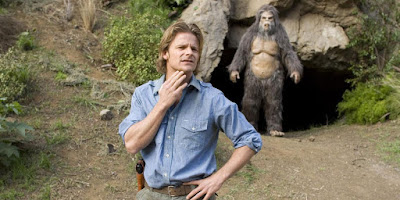 I can not remember the Lisa on Coast to Coast AM, who is an annoying blonde, but she is the one always going on date with Big Foot to get a rise in her camper trailer. What is important about this is, since the Lame Cherry provided the information that Big Foot is a cross dimensional being, as well as the exclusive that all of these UFO aliens were demons, I have noticed that the entire chant coming out of the George Noury group has been the echo of the revelations of this blog by God's Grace, and yet I have yet to hear any one of these frauds give any credit to the Lame Cherry as they are all plagiarists.

What I have noticed is there is a correlation between these dimensional creature sightings and the negating of Christ as the head of America. The same time Christ was removed, is the time tornadoes started wiping out US cities, Big Foot and UFO's began to rise marketedly.

This is pertinent in the cause and effect, as this blog has shown that severe weather was tamed in the United States when Christian Protestant Churches began to be built in the American wilderness. All sorts of plagues, pestilence and storm ceased for a number of decades, but with Christ being removed and Protestants being lessened, the effects are obvious.

What I am interested in, is the Matrix of  thought. The source of this the stairway to Heaven or the stairway to hell. The point being is what I have revealed is the more people remote view, they will create a channel into the river of thought, which other weaker minds are drawn into, like a trail. The same effect is with this UFO Big Foot crowd, in they have activated the old shaman religion channels, and by constantly using those areas, they are wearing a super high way into the dimensions, or they are producing and easy access for demons and creatures of the sort to enter this dimension. The perpetrators are literally empowering this field with their lust to see UFO's and Big Foot, and this gash in the matrix results in more of this profane evil to be accessing this dimension and time.

Think of it as a cerebral plasmatic vortex, of that will to see, the yearning to make contact, produces an energized field to conjure these entities through. Instead of demons bound in Euphrates waters, the chains are unloosed, and the very gates of hell, the anti plasma is being drawn into this world.

The shamans, along the natural ley lines of the world had produced these effects long before the modern American manifested, but it is akin to the oracles of Greece and Rome, as at Delphi, when Christ and Christians appeared the oracles went silent as a greater Master had appeared with a following. The two forces could not occupy the same space, and the lesser demonic was displaced.
In the United States the shamans had conjured these skinwalkers and other entities out of natural progression. There are always doors, and they opened them to curse other tribes. An Indian in their cult, never had a Great Spirit as God. What they had were good and bad spirits. The good spirits were good, and did not need to be offered to or bribed, so largely were ignored. The evil though were bribed to stop the bad effects.

So America always has had a manifestation of the human anti plasma interaction. It was suppressed when Christianity appeared in Protestants, but in form it began reappearing in the post modern era, and has been growing in observations ever since. Time and again, the adherents of this cult of the abominable, state they think thoughts of wanting to see these entities and the entities appear. In reports, they are gaining in grotesque size and shape. The interaction is feeding them and empowering them.

It is not just in the central points of these areas of prior manifestations, but it seems there are fracture across North America, as each new devilish human is an open door now to the matrix which has so many holes in it, it is leaking like sieve.  This occult is alien to God, and the adherents are becoming flesh portals, a manifestation that these inter dimensional doorways of current, are no longer the grid which the entities must manifest. It is a reality that even singular people, can conjure these elements, like florescent lights in an electric field lighting up without being plugged in. There is so much negative unGodly charge that the beings can manifest and generate anywhere a human is the portal of yearning.

These are no longer leaks. These are currents, and  they are flooding this world. The only way this will be stopped is again promoting Christ to displace the entities. Otherwise these forces will become more destructive than the current spiritual cannibalism in the United States. Perversion is self destroying millions and the very people are looking to abort themselves for a foreign race to displace them. It is an extraordinary madness which possesses the American people and the nations. It is not of life, but of death, and the more people place their thoughts and wills to this energization of the field, the more consumptive it will become.

As my work is constantly stolen, I will assume that there will be a new wave of experts discussing these issues as their own.

This though is another Lame Cherry exclusive in matter anti matter.