The Boner Erosion of Jared Kushner 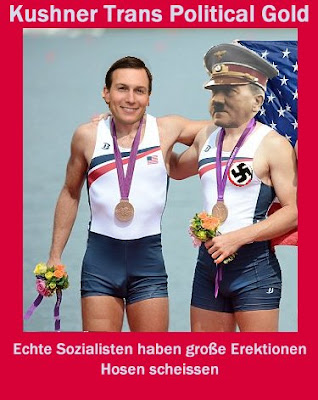 As I look around from the glory of 2016 November in the year of our Lord Christ, in how the Trump Trans led by Jewry Jared and Ivanka Kushner, in their sabotaging and removing every loyalist, Christian, Republican and Defense Intelligence Operative, leaving only the Indiana Mafia of Mike Pence in control, there can only be one condemnation in the House that Trump Built, and that is the fact that Jared Kushner sold this President a foundation, on the muck of swamp land, and it reverts to every problem Donald Trump has manifested as President, and it continues on with Donald Trump making ridiculous statements that firearm silencers are a danger to be banned, when a suppressor is not any different than a car's muffler.

The Lame Cherry stated before Donald Trump had his cabinet chosen for him on Kushner advice, that the problem which Bill Clinton had, was that he put into power too many ideologues for the Hamrod Clinton faction.
It all began with Governor Mario Cuomo, taking up space in being considered for every position from Secretary of State to the Supreme Court, that Bill Clinton was then left with people who simply did not measure up. Les Aspen of Defense was one of the worst nominations, until of course one ponders the long list of horrid people that Jared Kushner fondled into place from Rex Tillerson, to Herbert McMaster, to Mad Dong Mattis.

There has been little stability in this coup against Donald Trump, by design, and this President has veered further to National Socialism at each turn. It is to the point now that the Trump White House, has this shadowy group of thugs spouting off in a steamroller policy of failure, as the Bush, Clinton and Obama trolls troll him constantly for being the oaf who eats with his fingers at the table.

If you look at everything foreign and domestic in Donald Trump's policies, they are all horrid. America is being invaded at home and being rolled back overseas.

America has massive debt, massive spending, a burgeoning foreign population displacing the American population of property and resources in competition, as this Trump runs the credit card red of the United States, sucking American oil and gas out of this nation and dumping it subsidized to foreign nations, as inflation destroys Americans.

None of this is by accident, but by design. I am not stating that Jared Kushner is some genius, because he is not. Jared Kushner is a putz in New York terms, as that is what New Yorkers refer to him as. Kushner though is a leftist who was lured into the sphere of Henry Kissinger, who has sound policies, but the scions of this were the same group which has always been working to subvert Donald Trump, and their advice to Jared Kushner in always seeming reasonable is advice designed to end MAGA, and MAGA has been obliterated.

The Lame Cherry will provide you with an example of America's Beloved Ronald Reagan. President Reagan had a shining city on a hill vision, which Bill Casey shepherded through. It was cheap energy, jobs for Americans, strong industry and defense, and peace with the Soviet Union.
Ronald Reagan created three decades expansion and wealth across the world, including South America.

The problem was that the financiers of the cartel saw all of this, and let it happen, because they had their own agenda, which involved creating debt in South America to install Venezuelan communism to control all the resources there. This same cartel moved on America in the Dotcom Bust in sucking all that Ronald Reagan wealth out of the United States, and it was George HW Bush who made money cheap so Americans were stopped from saving money in banks.

Donald Trump already had a plundered house which he inherited, as the Clinton's concentraged wealth, W Bush in his tax breaks created massive debt, which Europeans imploded to install Birther Hussein, who then looted the United States Treasury for foreigners and the concentration of wealth for the Nazi Conglomerates.
Mr. Trump though fixed nothing, but increased the very cancers of debt, spending, inflation and centralized finance. As the Lame Cherry stated, Ronald Reagan provided the blueprint for fixing America, but Donald Trump at every Kushner turn only deepened Obama Marxism to transform Donald Trump the capitalist to Trump the National Socialist. Nazism is the state control of an economy, managed through centralized authority of conglomerates, while forcing employment, using foreign labor to subsidize the system, as the police state expands it's intimidation of the citizenry.
Those are the facts in Donald Trump is a Nazi by defintion of his regime and policy. His policies will completely wipe out the Prostestant White and Black Christian majority in the United States in 40 years, leaving only ghettos of Americans, surrounded by the hordes of these foreigners.

Not one person in this, has pointed to the real threat all of these millions of Trump foreigners bring, and I speak not of disease or crime, but the cancer they are, as they consume resources.
The United States does not have the water to provide for 200 million more of these foreigners drinking and bathing. The United States does not have the oil and gas to power these foreigners in cars or heating homes. A 500 million population in the United States will look like Indian sewer Ganges as the system will break down. When the United States is running a 2 trillion dollar deficit in Eurasian Trade, it will be 5 trillion with this many more Mexicans and Muslims eating this nation alive.

The United States simply can not exist with this foreign population eating this nation from within, and no one save this blog is pointing out this reality.  There simply is not land, housing, or construction materials for this kind of exploding population.

It simply does not help in an Alexandria Ocasio Cortez of the CIA, giving a pretty face to communism, with the rest of that flesh eating lot, speaking of 10 to 50 trillion dollars in new spending for a green world, with the reality is that money is not there. That kind of money can not be borrowed or the dollar will be worth negative 1000 dollars for every dollar. There is not enough oil to sell, and the United States does not produce in manufacturing or e data enough tax revenue to pay for this program. This is all known, and is part of the political realignment from American Republicanism to Nazism of the feudal few in charge of all, but AOC would literally eat the United States to the bedrock in order to build a falling tower of green which can not sustain itself.

It all though returns to Jared Kushner in the disaster he is for President Donald Trump. It is a disaster that his fellow Jew in Stephen Miller, simply can not provide enough conservative input to overcome the Trump presidency having fallen off the Kushner Kliff.

Below is a partial list of the failures of Donald Trump, and each of these failures has had Jared Kushner sticking his cock into the nethers of these policies, only to find out his small penis can not penetrate to the womb to impregnate a solution, so all that is left is another sloppy mess for Americans to be slimed with.


In reality, Jared Kushner is the Jimmy Carter of failures for Donald Trump.  While James Carter as President had his sabatoge man in Zbigniew Brzezinski creating global disasters over Human Rights, Kushner's idea of human rights is bringing all the vermin to America while blowing up the rest of the vermin who are not rich Jews or Arabs in Eurasia, as he sells the soul of the world to the dictatorship of China.

When Jared Kusher removed all of the Trump Christans and Loyalists in 2016 AD in the year of our Christ, it set the stage for the continuous failures of Donald Trump, and the reality is America can not survive under these Kushner policies of Nazism any more than the ACC policies of communism which is the democratic party.

Read the list of the Trump disasters. This is nothing to be shunned, ignored or made excuses for. It is something to demand that real solutions, Christian Conservative solutions be implemented, as when this course does not change, it will bring world war.


The disaster with Mexico.


The US economy - Gary Cohn


Pissgate, his travel with Ivanka to the Balkans on August 6th, 2016 AD in the year of our Lord, was supposed to shut down all of this, but it instead framed the President.