Prayers of the Almost Dead 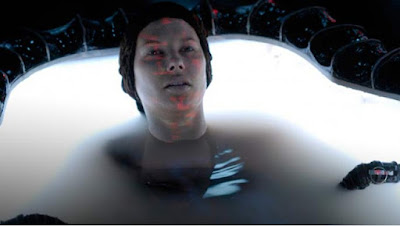 In learning of the matrix of thought, there is a reality which reveals itself, which reminds me of the episode of Star Trek, where Spock hears an entire Vulcan ship die, in the minds of all of those Vulcan's screaming out.

I have at this moment two very pronounced fang tracks on my lower leg from the Puntz. Time and again this cat in her sensitivities picks up evil entities which appear here, or she picks up the broadcast streaming through TL and myself from the outer world. I am convinced now when big events are building that things die here from baby calves which one did for absolutely no reason to baby kitties. There is such a destructive force in some events that they permeate an empath's sphere no matter how many barriers are set up in Jesus.
It reminds me of a submarine in depth charges. You can rig for them, but no matter what you are going to get pounded by them in the transference of energy.

It is the same with "event" which has been rebuilding again from the reset of the summer of 2016 AD in the year of our Lord. I have tracked it and watched it. I also have with TL been affected by it, as stated Poot fanged me hard one day, after she had been a recluse and hiding for days. She can feel what is there just as animals feel earthquakes. This is a spiritual quake and it displaces energy like  a plasma strike.

It is unsettling to feel it. It is a negative charge which you simply know bad things are going to happen, like a static cloud settles over one. Where I live in the brier patch, we rarely see the police. They are for the most part very nice people, except for one state patrol who is unpleasant.
For the first part of June as this was building, the police were all over the place here. Honestly that highway dick, I saw him on mainsteet, where he never goes. Waved at him and he glared at me, I  turned off to a side street, and sure as hell, I met him on a side street where I should not have, and he went the other way. Then in a store I saw him drive by and return later. That is one charged person in khaki who is not content to be eating donuts.
It projects that the police can feel something and are on patrol more as I rarely see them, except in these waves.

What I believe this is, is akin to the spike which was reported before 9 11. There was a great spiritual scream it seemed which was picked up before the event by several hours. I conclude what I feel are not the events, nor are the police, but instead it is the static charge striking through people, who in most cases have no idea why they are keyed up or why they are in police looking for a crime. They feel something as animals before an earthquake and are reacting to that charge.

As in Star Trek, what would the effect over the expanse of time, if a million souls died in an instant scream. What would be the effect if a million injured died in the weeks following, and the millions in anguish of a nation or world attacked. This is the Spock Wave which I believe emanates out from the event source. I also believe that the perpetraitors get charged by this, but when it is such a big spike that it actually makes them recoil  into not carrying out such an event.

An example might be Pearl Harbor. The Japanese had been humilated by FDR, who wanted them to attack. The Japanese were angry and were moving and the American leadership welcomed the move. Several thousand people dying was not enough of a wave to retard the attack as the existing wave of Japanese survival and American desire displaced the dead.
The tracking event this time was so large that it was displacing numbers of people,  including those behind it. The dates which inquiry pointed to were June 5 and June 14. I noted more police in this period prior and during on patrol. Poot also became withdrawn at the end of May  and around mid June after recovering. I got mauled on the 13th for absolutely no reason, save the cat could feel what was emanating from me in the angst of  all those millions.

As I type this on June 16, the cat is calmed down a great deal, but inside of me, I can feel that charge building again, like a dark static bumble bee buzzing. It has reset and it is ready as in the hybrids to jump the circuit again to complete the charge.

As this is more of a modern thing with enhanced internet charge, instinct tells me that the more this charge builds and resets, the more it will fatigue the circuits, or more to the point, the more the wetware is charged, the more it will become fatigued to not resisting the event as a back push, and those behind it will become accustomed to the charge and will not be detered by that negative flow their actions generate.

The world is on this curve again of the charge building. Some events such as a wormwood Biblical event would  not be shifted as the asteroid would be a constant event of matter. This though is something which ebbs and flows in the matrix and  at this juncture of time and space, the matrix is in the shift.

It is why the dates can not be locked on, as these are ideas in the matrix of actions which find resepticals in willing humans. The dates are there in forming, but until they are conducted to the wetware, they flow on or become history of an actual event.

From a personal experience, I do not like the charge which I feel. It is most unsettling and is building as I type this. It is out there and it keeps moving to it's destiny.

I know I feel it. I know that law enforcement is triggering to it without knowing why they are moved to be on patrol. I know that others feel it and have no idea what they are reacting to.

It is what it is. It is though like the submarine's tracking control of the IS WAS, which told were a ship was and where it is. I know what the IS WAS is of this event, because it is there. It keeps telling me that it is there and it keeps making my cat react to fang me.

It is all in the matrix flow and the data flow. It is a study of the matrix which I dislike as it is like being hooked up to an electric fencer and shocked by the charger incessantly.

It is though another Lame Cherry exclusive in matter anti matter for which the rich people will be donating generously for.