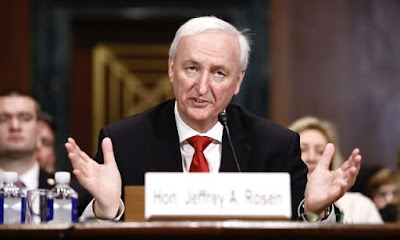 The Barr Department of Justice protects the American Citizen

All of us can agree that Representative Alexandria Ocasio Cortez was right in protesting the torture of Paul Manafort, and all of us can agree, in thanking God above, that the United States Department of Justice is returning to a era of trust from the American People, in the exemplary leadership of Attorney General William Barr in protecting the American People and the Institutions of viable Government.

No more pertinent example is the case of the must persecuted Paul Manafort, who has received a death sentence from the Robert Mueller witch hunt, which unleashed the liberals of New York to abuse and torture this old man to death in prison.
At heart of this, Mr. Manafort who committed no violent crimes, was being removed from low security facilities to Rikers Island in New York, a place of the worst felons on the planet earth, where Mr. Manafort would be force to be held in isolation so the population would not murder him. Mr. Manafort's life was in extreme jeopardy as no prison can keep an inmate safe 100% of the time by isolating them.

This was the issue which the Lame Cherry first protested and brought up for the solution that the DOJ should take custody of Mr. Manafort for his protection. This protest helped move the scales of Justice as the stellar Attorney General examined the issue with his Deputry Attorney General, Jeffrey Rosen, and promptly dispatched a letter to the state of New York, informing the liberals there that the DOJ was monitoring the situation.

Literally the information that Paul Manafort has, was sentencing him to death in this continued cover up of who the Missing Link is in this coup against Donald Trump. This was a state run assassination out of New York and it was the worst of Jim Crowe in putting a black man in a KKK population to be murdered. This was Obama sentencing Chris Stevens to death in Benghazi to cover up Obama arms trade to terrorists.

The situation though has now rightly changed with the threat of the Deputy Attorney General.


Manafort, 70, is awaiting trial after being indicted on 16 state felonies in New York and was expected to be moved to the facility in the coming days. But the Times reported that Jeffrey Rosen, the new deputy attorney general at the Department of Justice, intervened, writing a letter to Manhattan’s district attorney to indicate that he “was monitoring where Mr. Manafort would be held in New York.”

Prison officials decided on Monday that Manafort would instead head to either the Metropolitan Correctional Center in Manhattan or remain at the low-security federal prison in Pennsylvania where he is currently being held.


What Deputy Rosen was informing the liberals of New York was, that if Paul Manafort, so much as had his hair mussed, caught a cold or slipped on a wet floor in his 70 year old condition that the entire Department of Justice of the United States of America would be unleashed on the prosecutors of the state of New York for criminal violations, and they would be indicted and serving charges for attempted murder or murder of Paul Manafort.

The liberals of New York in this witch hunt unleashed by Robert Mueller, had concluded they could abuse Mr. Manafort as Mr. Mueller's team had been abusing the law and citizenry, but that case has now changed in they will rue the day that they decided to join in this persecution of Mr. Manafort, because a 70 year old man in detention can have any number of accidents, and when he ends up in the infirmary instead of the hospital, that abuse is a civil rights violation, and that becomes attempted murder, and if Mr. Manafort dies from the stress, these New York liberals will be facing federal murder charges.


A senior Justice Department official had cited “health and personal safety” as the reason for the decision.
“The Department requested the views of New York prosecutors, who did not object to Mr. Manafort’s attorneys’ proposal,” the official said. “In light of New York’s position, and Mr. Manafort’s unique health and safety needs, the Department determined to err on the side of caution by keeping Mr. Manafort in federal custody during the pendency of his state proceedings.”
Manafort has suffered from gout, and began to appear in court in a wheelchair after a federal judge ordered him imprisoned. In D.C. federal court proceedings in January, transcripts show his attorneys claiming that the 70-year old Republican operative also faced depression and anxiety since being incarcerated in June 2018.

That is what made these liberals jump. They are still obstinate in holding onto their rag doll of Manafort in Manhattan custody, but Paul Manafort is the one who just imprisoned them.
Manafort is an old man, and the clock is ticking for charges against the liberals of New York. He falls, gets sick, someone assaults him, he does not get the correct treatment or confinement kills him, which it will, and the Department of Justice will file felony charges against a host of these liberals.

The Lame Cherry advice to these not to bright liberals, is for them to offer Paul Manafort a plea bargain for time already served and to turn Mr. Manafort back over to federal custody, so these liberals can save themselves from the doom of their own making.

Once again, another Lame Cherry exclusive in matter anti matter, because someone has to do more than sunprancer crow about nothing he had to do with, in saving an old man from an New York assassination lynching.