The Shattered Plate Faith of God 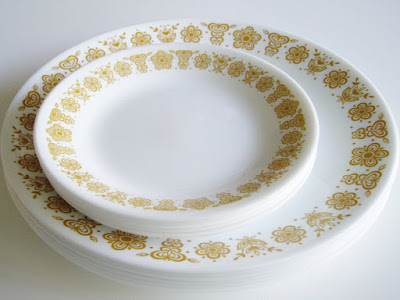 
It will be a month now as I type this, but the other day, the Norma in Law, yes I have divulged TL's parental name here for the first time, was having a bad day. I guess I should clarify that with, NiL is always have a bad day, but when she has septic days, bad things manifest like shockwaves sometimes around here. I can always tell it, as stuff drops or some other upsetting things happens, and it is bound down in Jesus Name, but I just shrug and say, "Norma is having a bad day".

The other day though I did not shrug as I was getting breakfast ready and a plate, a Correlware slipped out of my hand for no reason and shattered. I knew it was NiL as I have never dropped or broken a plate in my life.
So I cussed as I do, swept up the glass and moved on. It bothered me though as we do not have complete sets in being poor. This group was like 5 plates of the mid size which I picked up for a quarter. It was upsetting as for TL and I, I do dishes once a day, and that means the necessity of 4 plates in this design as I will not have us eating out of different pattern plates.
One idiot told me that tin pie pans were great to eat out of. That is what he does in Kentucky so he can have at it, but I am not interested in eating breakfast out of tin pie tins.

I love the blue stuff, and we have that, but not this tan stuff, so I was grousing around about it in my inner psyche. 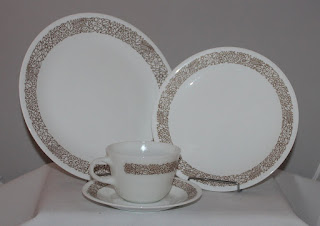 That is until we entered the thrift store and I walked by the plates and did not see any Correl, so I kept going on and thinking, there should be plates there as I was upset about the shattered one.

TL soon appeared with a box of dishes for 5 bucks.......sure as there is a God, there was a set of the dish I broke or NiL had a psychic tantrum and broke.

Now we have a full set, of big plates and small and I am thanking God for His being restorative again, as God sees all and rights all. I bitch about the things I think God should be busy about, but He is always busy about all things for all of His children. I know if I would have broke a dinosaur an entire Jurassic Park would have appeared. God is good and I place this here to strengthen your Faith in Him, as He is always there and always watching over and providing.

With that, thank You, God.