Removing another theat to America 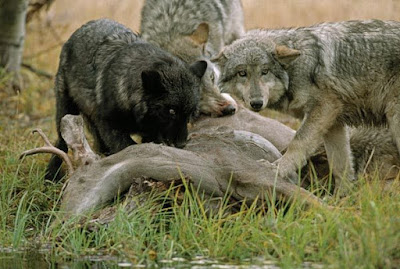 
I have invested a great deal of cajoling and bitching at government people to have the murderous gray wolf delisted as an endangered species, as it is not endangered, but expanding out of seeded areas it should never have been reintroduced in, and has been a menace killing hunting dogs in Wisconsin, Minnesota and all the neighboring states from the Dakotas to Illinois.

Colorado is a similar disaster as wolves are spreading into other areas, as are the wolves of Yellowstone slaughtering livestock in Montana. I was speaking with  my cousin from Montana recently and he stated the cattle coming into sale barns in Montana were climbing the walls and running the staff out of pens, and every one of those cows exists in wolf country.

One of the worst areas is Mexico, as people focus on the two legged invaders, but that shit hole is a breeding pool of wolves endangering Americans and precious wildlife.

The US Fish and Wildlife is allowing comments on their current move to delist these murderous predators from the endangered list and open it up to States to control these populations.
If you read the 90 plus thousand comments, you can see the people who hate America have been using form letters to flood the process with comments, meant to influence the government to keep this globalist policy in place to threaten Americans and destroy livestock and animals, as  part of a gun control measure.

If you care about wildlife, then post a comment in support of managing the gray wolf, by killing them in the numbers they need to be reduced to.

I have stated he first Conservationists in Teddy Roosevelt and John Burroughs both advocated the elimination of wolves, bears, coyotes and cougars from the lower 48 states and leaving only useful wildlife as in elk, moose, sheep, goats and deer. This has been violated and should never have been violated as from the 1960's there has been war on Americans.

Draining the swamp and getting rid of the deep state, includes the killing of dangerous predators .Wolves have teeth that can slash sinews and shred  muscles like razor blades and their jaws can crush your leg bones like a hammer blow.

Wolves do not got to Burger King or Pizza Hut. They kill daily to survive and what they kill are other living animals, and they do so by hamstringing, gutting and eating animals alive. None of this is pretty, and is the reason cyanide was used by the ton to kill off these dangers when the government once protected Americans.
I admire Richard Nixon, but he made the worse mistake in wildlife management in ending the use of modern poisons.  There has to be a return to this, poisons made available to landowners and America returned to the People and to wildlife with purpose.  The age of needing large predators ended in the mid 1800's. It is time to restore the Roosevelt order to conserving good wildlife and that begins will eliminating dangerous predators.