Sebastian Kurz Comes Out Ahead 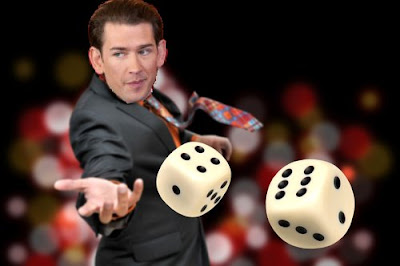 Chancellor Sebastian Kurz on the weekend of June 15th, 2019 was strangely silent and absent from Twitter, as he has been since the coup was waged against him, pressing the volk, in being one with the people of Austria again in the upcoming elections which are moving to the end of September.

He reappeared and allowed the world some insight as to exactly what he was engaged in, when he released a statement at a press conference stating that the American Romanian connection of Bill and Hillary Clinton with their Jew election meddler Silberstein, who set up Heinze Christian Strache's downfall which brought down the Chancellor by internal Austrian political intrigue, was developed into a second tier operation, which moved with E assassination targeting of the Chancellor in a like frame up that Donald Trump experienced, in emails were sent out which were fake, attempting to link Kurz and the People's Party to the Strache incident.

This is a very big news story as the forces which moved to bring down the Habsburgs and Sebastian Kurz in Europe, produced a second wave in an attempt to keep him from power in September.

What is most troubling is, this all smacks of Steve Bannon, the Mike Pompeo CIA and the Black Robe Jesuits that Bannon is involved with in Europe as a counter Pater Pope drive to remove Francis from power.

Sebastian Kurz is now rightly defining this as a criminal series of attacks at the government of Austria. He has IT experts who have traced the emails and he has the media behind him, in exposing this coup against Austria. 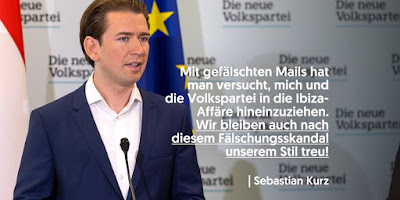 "Fact is: These mails are fake. I'm shocked at how much criminal energy there seems to be in some."

"I'd like to thank the IT experts who came to our house over the weekend and researched the origin of the mails. Many thanks also to all media representatives who have been very professional."


Every attempt to bring down the Chancellor only makes him stronger with his people. The reality is that Kurz is not only gaining strength with the people of Austria, but has media backing and he has the evidence building in who was behind all of this. 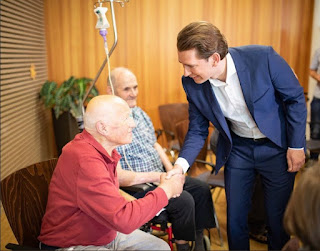 This is a dangerous time for Herr Kurz, as the old order in American colonial Europe has moved twice now to remove Sebastian Kurz from power and keep him from power. This group has engaged in criminal activities in bringing down the Austrian Government. It would stand to reason in their being exposed  that the chances are they may resort to lethal means to remedy Sebastian Kurz, as there is a situation which is a reality that Sebastian Kurz will win a super majority in Austria in September, and gain such power to this time gain complete control over Austrian intelligence and security, to unleash them on those people who were behind this coup.


Coups are not bloodless things and when the police state is unleashed,  they eradicate those  who are on the losing side.

Sebastian Kurz has already named this Romanian Silberstein, who is directly connected to Bill and Hillary Clinton. What is being uncovered has the same CIA machinations of the Clintons and Obamas bringing down Benjamin Netanyahu before, and  the same traits of the framing of Donald Trump.

So you comprehend this, the Europeans were already furious in the Obama era for being spied on by Obama. At this juncture, the Europeans are liberating themselves from Donald Trump's colonialism. They have rejected Steve Bannon and the Black Robe Jesuits in the last elections, and in this  feeling of angst, what is emerging in Europe  is an Anglo Saxon rule both in European Parliament and in the Fatherland and Motherland, with Sebastian Kurz poised to take power again.

The Europeans will retaliate on the United States in another 2008 type crash to protect themselves as this is not the Russians behind this, and the early fingerprints are pointing to the left in the United States, and regrettably President Donald Trump in his meeting with Sebastian Kurz lectured at him, and to this Kurz moved to meetings with the world bank in how to deal with a world without American bullying.

The very apparatus which Sebastian Kurz invested all of 2018 and early 2019 is in place. Africa will become the consumer market for Europe. China will bridge the link to 5G internet in Europe as the Asian rim provides the technological 22nd century advancement for Europe, as Russia with North Africa fuels the return of the European Empire of Rome from the Indus to the Atlantic.

This beast is arising whether Sebastian Kurz is in power or not, as he fathered this Habsburg empire to return, and it will by natural progression arise from the sea of peoples and begin to dominate the world as the tide of China  and the United States ebb on these currents.

It honestly does not matter who is behind this, as America is already getting the blame, as the Clinton's names are on it, and Donald Trump has not been the least diplomatic to the coming leader of the world, in Sebastian Kurz.


Once again, another Lame Cherry exclusive  in matter anti matter. 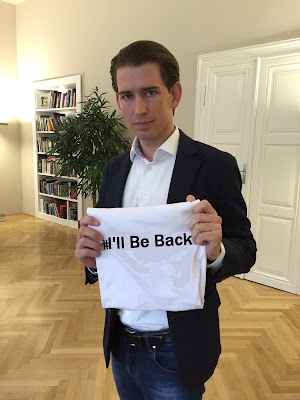