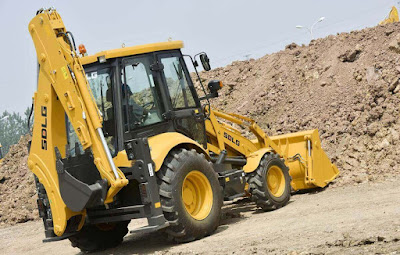 
My neighbor is really pure gold. Really his family is more like our family as I have known him since before we started school together at age 4. He helps out constantly, in most cases the payment is food or beer, and other times it is a thank you.

That is why when I think of things like gardening, I ask him if he would dig up our new garden as our past spots really sucked. Today I sprang it on him, and he was thinking about it, and as I asked about a digger, he thought maybe a disk which I agreed as when you get people to do something, you build on their ideas, but he mentioned it would leave ridges as it did for his mom.

After TL and I were talking about, about everything rural people do from trapping, to rodents digging to farming, I said to him that maybe his backhoe would work in the garden. Give him time to play with it, as he just got the thing.

He looked amused and said, that he could probably move the sod, but I said you could dig it down too and really stir things up. He seemed pleased when I said he could practice as he had lots of levers and then was telling me about having just dug out a huge boulder that he couldn't move with his loader tractor.
He finished with, "Well it was  no hurry," but it was a confirmation that I have him on the way someday.

My hope is that he really goes to China on this, as this is an old pig pen, a real sty literally where our hogs used to lay in the mud and grunt. As it is near the pump, always was a mud hole, I figure that it will be a good garden spot as it does drain. I have high hopes for it, and as the tank runs over at times in me getting busy, I am going to make sure it all runs into the garden.

This has been a weight on me, as I keep waiting for money and I would love to have a roto tiller for a tractor. Oh I go on craigslist and noted last time in my hundreds of bookmarks I had  like 20 from the last time in tractors and things, as I love looking at that stuff in knowing how easy they are and making my back not hurt.
There was a 600 dollar Farmall H, which I would love to get....did not run, but that would be enjoyment in getting the motor unstuck and having it run. That of course all takes money and time, and neither of which I have right now, as I wear TL out in things for the blog and then the few projects I have to get done outside to keep things going as we again wait on things.
But when I get the garden dug, and get some things planted, I will be pleased as gardens wick the world away from me. TL can sit with cats outside in that fur mountain surrounding TL, but for me I just get lost in looking at a garden. I just am at peace with potatoes, corn and beets.

It is though how God works things out and I will keep going and speaking good. Not many people get a construction implement to dig their garden, but that is the way it goes sometimes as the best thing in the world is, is to dig a garden to hell in deep tilling. Who knows, maybe we will strike gold.