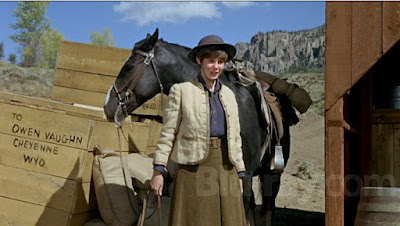 Each time I see Kim Darby or a horrid image of her in a recreation of True Grit, I come more and more to admiring her acting ability. This though is not about her, but about her horse, Little Blackie, who Rooster Cogburn had to ride into the ground to save her from snake bite.
In John Wayne's version he left the horse when it fell, in the hope it might get  up. Jeff Bridges put a bullet into that little horse in more Jew propaganda designed to destroy the hope in Americans.


There was in a book from North American Hunt Club a real Little Blackie, which I read about in a story which occurred over 30 years ago. What took place was  an idiot who is probably now dead, with a bad heart, going into the mountains with a guide, whereby he talked the guide in Wyoming to letting him go along to pack an elk one day.

Well, horses in the west are not Trigger or Dollar, and the two this Art guy had, were one would not stop hoofing up every piece of grass on the mountain, ripping the rope from the guys hand causing a rope burn, as his mount soon discovered that Art was mad, pulled hard on the rope which was under the horses tail, which burned like a poker, and the horse began to buck like shot in the ass.

Rocks were flying, and Art soon was flying, hit the ground, and a big boulder got loose and smashed his ankle, and that is where the guide found him.

His heart was giving out, and they could not move him, so it meant a hard rid for camp for heart meds and blankets, while the wrangler road hell for leather 15 miles to a phone to call in a rescue helo.

Well the boys got back to camp, the wrangler got on a little black horse and away he went, allowing it to get it's wind, as the guide rode back on another horse to keep Art from going tits up.

Art was not looking good when he got there in being grey, was out of his head, begging to not let the coyotes  eat him and being a real problem.

Meanwhile little blackie was  now loping along, crossing rivers and then snorting to a halt when two grizzly cubs ran across the path and 30 yards away, the she show was snapping her jaws ready to charge.

The wrangler knew if he tried to turn, she would get him probably, and certainly be a bitch in scowling around the trail for hours in not letting him get by, so he spurred the horse, let out a yell and the bear distracted by her cubs, rose up on her hind legs in puzzlement. That gave the horse time to get by, but just enough to get by as a charge followed and the while it was 100 yards to the river, the bear was gaining and the wrangler knew that when he hit the river through the cut the  bear would jump from above and that would be the end of the horse.
So he turned the horse to the bank and jumped him into the river like a movie script and both plunged into the river half way across, swimming for all they were worth. The sow  was sitting on the bank  growling, and as they reach the shore, the griz moved off to her cubs and  that is when the wrangler saw the horse was limping from a hurt shoulder.
He walked  the pony for a ways, rode him, but all his fire was gone in the bear  charge, as everything now spooked the horse with miles to go, and he knew the horse would not make the last crossing as he barely made crossing number four.

That is when he told the horse, they had to get through and with that the horse perked up, made it across the river, and for 5 miles carried the wrangler to the corral, where splay legged in the corral the horse waited for the emergency call to be made.

It took until 3 AM in the morning with a risen moon for the helo to land on the mountain and four men to haul Art out up that mountain. He would spend 5 hours in surgery, get more metal in this bones than nails in a box, would recover with a limp, but the horse died in the night.

Whether it was a blood clot, or an organ broke in the jump, doesn't matter, as it was a  the case of another dumb ass human not knowing animals in wrapping a rope  around his hand, being pissed, burning a horses ass, and getting his leg broke  on a mountain, when he already had 3 heart attacks.

That horse should have lived, but didn't because a person never thought. And while you can't plug stupid people, if that horse was mine, I would  have plugged every goddamn grizzly for the rest of  my life, and the  game wardens be damned, as there ain't nothing worse in this world than stupid people who protect dangerous animals. Art and the grizzly were the same creatures who did not belong in the mountains.

No one ever says it is the horse that had the true grit in True Grit, making up for the stubborn mistakes of people who got their agenda first and last.

That is the saga of the real Little Blackie.