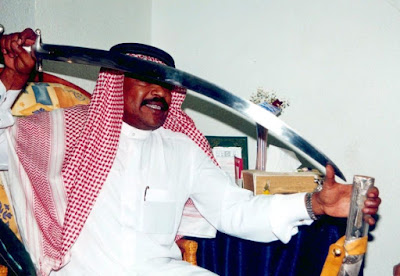 Have sword, will travel....


I see that Jew Rupert Murdoch was berating Jared Kushner's good Saudi friends for slaughtering so many bad Muslims that they had to hire more head cutters in the kingdom. I am fascinated by all of this as the English think that being tortured in prison for life or tortured out of prison for life in having to look at Chuck in Waiting is humane. The Saudi's got it right as nothing says economy and humane like a 4 foot sword lopping off a Muslim head.

The news comes after it slaughtered 37 people in one bloody day last week meaning it is now tipped to kill a record number of its citizens in 2019.


I like learning things as the English used to draw, quarter, hang and cut off heads, but in the movies you never see the mass executions. The learning part is one executioner killing 37 Muslims is too much, as they apparently can't recover fast enough for the next day or next week's worth of work, so they are hiring.

I figure they will employ a half dozen, as I would think a person could do 6 heads in a day and be ready to do six more the next. I also noted that they get to amputate thief's hands too.
I think that part would be more difficult, as there are allot of bones, but then the spine is a big bone too, and unless you hit that right. you get to sawing and trying to lop off the head again. 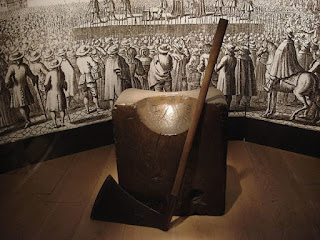 That is why the English and the French opted for efficiency. The English used the Broad Axe and the French did the Guillotine. I think for economics sake that the Saudi's should just buy two guillotines. No one gets wore out running that lady, and I doubt the blade has to be sharpened any more than a meat cleaver in a butcher shop. Just whet it at the end of the day and be ready for the next.

As I am waiting for a big donation from a mysterious Christian rich person, who apparently is a dichotomy who does not exist, I would like to have the kingdom employ me. I have a sword and I think it would be like a 4 beer day in that heat to take care of my 6 quota for the day.
Just stand up wind for blood spray, and make sure the criminal is tied down so they don't go jumping jack around and dance with you, and it would be no problem in clean up, as Saudi Arabia has lots of sand and sand makes good absorption material, so just toss a bucket of sand on top of the blood stain and no one would know a thing about it.

Thing is, the executioner pictured above, is smiling, so he really likes his job, even if he is over worked. Not many people are happy in their work, but apparently killing Muslims for the Muslim state is a joyful occupation.
The thing is, I am most interested in the attire. I just like that red and white scarf and the big flowing robe. Who would not proudly wear that official costume of the kingdom and  strap on your sword, I bet there is no waiting in line at the burger joint.

So I am hoping that the kingdom contacts me to hire me as  this is sort of my application. Granted I don't know the medical plan, but I bet the Saudi's have good massage plan for sore muscles after a hard day of head lopping or hand lopping. That is about all the medical I need, a nice Saudi gal massaging my aching muscles and maybe getting the blood stains out of my official executioner's costume, and that about sows it up.
I am sure that the King allows his employees to take his camels and Arabian horses out for a ride from time to time, and you probably get to shoot machine guns or rockets off too that you find laying around. It sounds like paradise to me, and you can see why Jared and Ivanka  Kushner are such good friends with the Saudi Arabs. 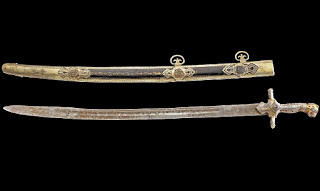 Public beheadings will typically take place around 9am when the convicted person is walked into a square and made to kneel in front of the executioner.
The executioner uses a sword known as a sulthan to remove the condemned person's head from his or her body at the neck.

9 AM huh. Well I could get up and cut heads off like I do now in doing chores, be done by 10 and have breakfast starting with my morning coffee with TL, so that can all work out. I would make sure my sword was sharp the night before, and it sure can't be that hard to get dressed wearing two sheets.

So I think the English and the Sun should stick to Page 3 girls and leave the Muslim adoration to the Kushners and the Sharia law stuff to the Saudi's. The way things are going with all these Muslims  being imported by Donald Trump, America will probably have sword squads too. I may not even have to go to Saudi Arabia, and could get a job in the states. I bet the Saudi's pay like six figures too, so I would not need them rich people in begging them for big donations. Hell who knows, I could have  on my flowing robes and who will appear but a rich person who pissed off Donald Trump and they will say,' Say LC I used to read your blog".
And I will say, "Did you donate you poor sinner on your way to eternal hell fire".
And they will say, "No, but I meant to", and that will end the conversation as out comes the head lopper and justice will be done. 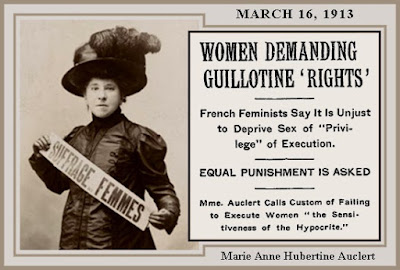 I still like efficiency though in the guillotine, but maybe for old times sake and  to make sure it is done right, a good fillet knife to cut off hands would  be in order for Sharia America. Maybe in the United States it will Navy blue checks with white, as that would be pretty like the Marines. Show less blood too I bet.

Maybe the President will be thinking he needs  in  all this Russiagate stuff going back on democrats that he needs a  cabinet position of State Executioner and will appoint me. Get Ivanka in a robe and put her to work massaging my aching muscles and have a few beers and I would be thinking about how to spend my 160,000 dollar salary.

I bet the IRS never audits head loppers and a head lopper never gets a speeding ticket.

Talk about all the benefits of being a government employee. Only thing is, Jeb Bush is not doing anything, and I bet he will be wanting this kinder and gentler head lopper job. I think it should be first come first get the job and no insider stuff for president kids. 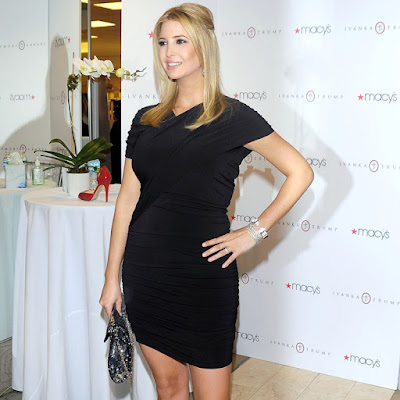 OK one picture, but I have to get back and massage Lame Cherry.