Barack Obama May Start Armageddon From The Grave 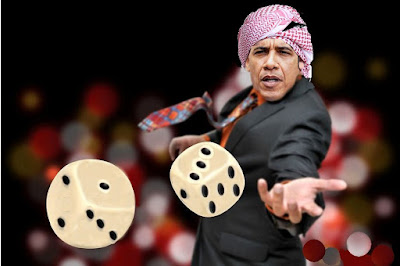 It is not a secret that this blog witnessed in the matrix an event on June 13, 2013, in a lethal coup against the Birther Hussein regime, which had the Birther replaced with a look alike, while Michelle and Val stuck Birther's corpse into a freezer unit in the White House bunker, on top of some chicken entrees.

The body was then moved to Hawaii, after the fact, cremated and dumped in the ocean. Obama was not the same after June 2013, did not look the same, he lost politically all the time, and Joe Biden became acting president.

With that debate point, the  reality is that before Obama left the building, is that he had engineered a scheme in Libya to steel their deep water oil, has the French murder Colonel Khadaffi and fifty of his loyalists, shipped the arms to ISIS in Syria for that Obama war, and most importantly wanted Ambassador Chris Stevens kidnapped, so Obama could rescue Stevens in a landslide victory against strawman, Mormon Mitt Romney in the 2012 elections. Obama was obsessed with undoing the ghost of Jimmy Carter Iran hostage past and becoming Ronald Reagan.
Obama's terrorists though ass raped Stevens to death, as Stevens was there trying to get the weapons back, but in the cover up, the fag ambassador who had no business being in a Muslim land, was murdered.

What was left in Libya was Obama community organized communist rule by committee. It produced an invasion of Europe, until Sebastian Kurz stated that was going to end. and in this, there has been multi national jockeying for Libya to get their oil and gas.

That is the build up to Armageddon in the making beginning in Libya, Kurz has placed migrant detention centers in Libya to protect Europe. Italy is Libya's protector, but France has in intrigue been attempting to steal that beach head, along with the British MI6 intrigue which started all of this with George Soros.

There are now two sides in Libya. The communists backed by the United Nations and a group led by a once Libyan CIA military officer, Khalifa Haftar. Haftar is in charge of the Libyan National Army which controls western Libya, and this is where the Obama klusterfuck begins.

Haftar's forces had almost put an end to this Obama Civil War and were advancing on Tripoli, when there appeared American TOW missiles, which had been sold to the UAE. This has the fingerprints of Jared Kushner all over it, as the UAE denied forwarding the missiles, which means the American missiles were offloaded into Turkey, who did state that they were supplying weapons to the United Nation communists at Tripoli.
So on one side, there are American arms, from UAE, Turkey and Jordan. On the other side are Saudi Arabia and Egypt. As Egypt is the closest air power to Libya, it is a given that American F 16 jets out of Egypt bombed a weapon's depot which the communists had placed inside a migrant detention center.

GNA forces attempting to seize the city reportedly found advanced American anti-tank rockets sold by the US to the UAE. The UAE denied the weapons had belonged to it.
Last month Turkish President Recep Tayyip Erdogan acknowledged to international journalists that Turkey was sending military equipment to assist pro-GNA forces.
Rights group Amnesty International had warned earlier on Wednesday about the devastating effect the violation of the UN embargo was having on civilians.
“The UN arms embargo is meant to protect civilians in Libya. But Jordan, the United Arab Emirates and Turkey, among others, are blatantly flouting it by providing sophisticated armoured vehicles, drones, guided missiles and other weapons," said Magdalena Mughrabi, Deputy Middle East and North Africa Director at Amnesty.


The Donald Trump weapons contractors must be most pleased about this, in America is supplying both sides in the Libyan war, and both sides in who is arming the factions in Libya, as it was tanks yesterday, today it was TOW missiles, tonight it was F 16's. Who knows it probably will be nukes by the end of the month.


An apparent airstrike launched by a warlord backed by the West’s Arab allies hit a migrant-holding facility in a suburb of the Libyan capital early Wednesday, killing at least 40 civilians and injuring scores more.


So you understand this Obama klusterfuck. In Europe, you have the Germans who allowed in the Obama Nigger invasion. The Austrians who put a stop to it. Italy is the protector of Libya. France with England is trying to dislodge Italy from it's role to get at the Libyan oil and gas.

Obama and Hillary Clinton mass murdered the Libyan government of Colonel Khadaffi to hand over Libyan oil to British Petroleum, from the Russians in deep water drilling........after Obama sabotaged the Gulf Gusher in the Gulf of Mexico to drive up oil prices for his green bribes program still costing Americans billions of dollars in high fuel and electricity.
The Obama communists in Libya are protected by the United Nations, which is pumping oil out in a money laundering scheme for leftists in Europe.

As you can see this is a major circle jerk, as Egypt and Saudi Arabia, the powers in the region, are trying to bring stability in bringing to power General Haftar to create a Khadaffi secular Islamic state again, without terrorists, stable and not causing terror invasion upheaval all through Africa, the Mideast and Europe.

Haftar was in the CIA sphere for a number of years, and that means Mosaad. That did not work to fruition, so he moved onto France, and not finding control of Libya there as France liked the Obama communists, Haftar became friendly with Sebastian Kurz, and the powers of Mecca and Cairo.

France is now wailing with all the other leftists for negotiations to prevail which is ludicrous as all that means is Libya is going to be looted by the Obama community of communists while those that would restore order and bring wealth to Libyans would be thwarted. This is a proxy war of the Kushner spheres of conflict. Kushner for Tel Aviv is backing Saudi Arabia, Egypt and Iraq, against Turkey, UAE and Iran. The hot spot in the Mideast east is Yemen for Saudi Arabia, and in the central Mideast is Syria and in North Africa the front has now become Libya. This is a Pan Arabian War which is being fought in the Sunni of Saudi Arabia, Iraq, Syria and Egypt, against the Shia of Iran and Turkey, with the UAE involved in money laundering, arms trade and gold transfers out of Venezuela.

The ignition point is there, and on the fringes of this are Russia, Europe, China and the United States. There is a window in this in Libya as the United Nations is there as it always is protecting the looting of a nation, but any of the big four now could move into Libya to take control.
If the United States moves, the American public does not want another Obama Bush war. Europe will be an adversary as it wants oil. Russia would be most displeased as would China, as they see Libyan turmoil as an opportunity for gaining access to the oil again.

Europe has the check in the balance in this which is most pronounced. Italy has historic presence. Sebastian Kurz has the diplomatic front, but the problem is French and Anglo intrigue for that Libyan oil. If Kurz was in power as head of the European Union, he could send troops into Libya to bring stability, remove the UN, and govern the area.

For those who have reference to the Bible, this begins to take on the shadows of Prophecy in the anti Christ seizing North Africa, moving into Egypt and gaining the Holy Land. In the world Obama bastardized, this is what would take place if Europe to bring security to Europe, moved on Libya, and came against Saudi Arabia and Egypt who are backing Haftar.
As Jared Kushner's peace plan is just another money skimming criminal act, Europe would having taken out Egypt, move into the Holy Land to bring security.
That is what the Seers and Nostradamus witnessed from different oracles. It is how Obama from the grave started Armageddon by sticking a cock up a fags ass in Benghazi for a wag the dog moment for his 2012 election theft.

Debate point aside if Obama is ash on the ocean or Obama is still the prancing dancing boy of faggery, the policies of Barack Obama and Hillary Clinton caused this airstrike in Libya, in expanded adventurism by Sunni in Barack Hussein Obama, the Shia, has created an abyss which will engulf the world as the Obama Legacy is a Pan Arabian War, of Sunni fighting Shia.
So  this is understood. The Jews have nuclear warheads. Iran has nuclear warheads. Saudi Arabia has nuclear warheads. Turkey has nuclear warheads. This is what installing a Birther into 1600 Penn Avenue results as American liberals want a Nigger doll to play with in the White House to prove they were not racists.

The fact is that there are now two nuclear points in Pan Islam. Iran and Libya. That increases the reality of drawing in the world to Armageddon as the Bible predicts. 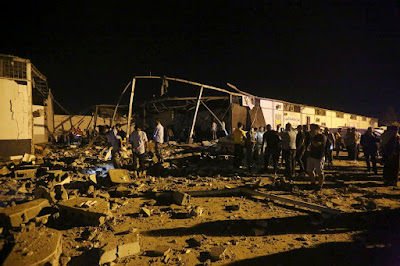 The Bloodshed of Barry Obama