Get Your Black Ass Over There 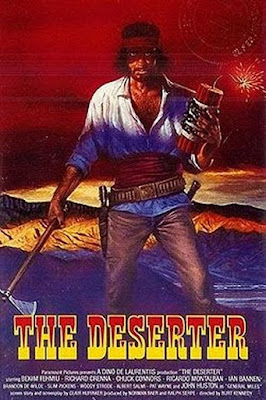 When I was a child, I loved watching Westerns in any form, so I watched them all. I remember the Magnificent Seven and the sequels, to the Wild Bunch, but always liked John Wayne as they were less harsh.

There was one movie in the recesses of my mind, which I had thought was a Mag 7 genre, like one in which Mexican federales were molesting little girls, but stumbled back upon it, when a scene triggered from my 9 year old mind of a mule going up a mountain.

The movie is The Deserter, which makes it a difficult movie to track down as it is also known as The Devil's Backbone. 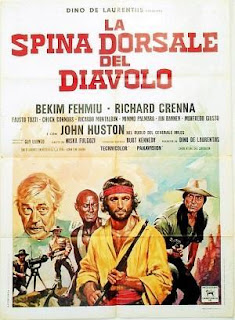 The cast is very good, led by Yugoslavian mancake, Bekim Femiu, is very strong from John Wayne's son,  John Huston, Richard Crenna, Woody Strode, Ricardo Montalban and Chuck Connors, but of course the wife who dies at the beginning does not even receive a screen credit. It is hard to be the hot wife covered in blood and gore from Apache rape and torture. 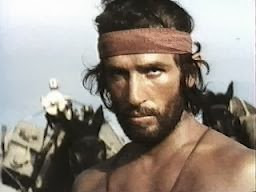 This movie is better than the Dirty Dozen which it mimics in Lee Marvin.  I find it is weak in the ending, but the beginning is superb, as the writing is fantastic and Burt Kennedy drives a hard core film in directing.
Weak as I am a stickler for details in things that do not make sense, and I will not give the fight scenes away, but weakness is playing to Indians whose children murder White people in the movie and the writing enables it.

In knowing that, you can roll your eyes and appreciate this very well made movie. From what I know of this film, CBS obtained the broadcast rights to it in 1971 and it appeared only once in early television, and then disappeared, to only reappear in re release with other trash European Westerns like Dead Aim.

Dead Aim is a film about gravediggers, in one falls for a whore, and follows her around, after a bad wagon robbery, as her paramour runs off leaving her, and  then comes back and shoots her, and the grave digger shoots him and gets shot, as a black dude kisses the corpse.
The one scene I remember is a dream where the undertaker, is in a bubble bath and the whore masturbates him as he sniffs a rose. Yes symbolism and rather artsy European. 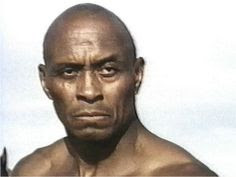 The Deserter is one of the better Westerns which is never mentioned. The Serb has a great line in telling Woody Strode to "get his black ass over there". I enjoyed that and I never saw that on the censored version.

Anyway, this is a pretty good film, the ending is really good, just getting there is not so great in the last minutes, but there is a great deal of action to distract you to get there.

I would like the millions to remake this movie as only I could, so if any of your rich miscreants have worthless children or you dream of a big movie debut, I will put you in, providing you understand I decide things and you work for me, and I will tell you if you suck, and only deserve a cameo or be left in the background.

There has to be some way for rich people to self indulge as they certainly do not do it for doing it for God's sake.

Well that's about it. This is a good fill movie if you like Westerns.

How about Kayne West as Woody Strode and Kim Kardashian as the gang raped, gang tortured beautiful wife. I would give her screen credits.