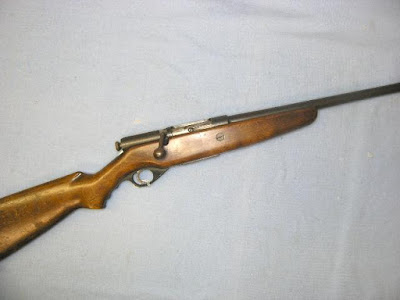 Before the old man died,  he brought home a pile of guns from an auction one day, that no one wanted, as he only bought shit that was cheap. Most of the guns he had were things he picked up for a couple of bucks, and remarkably, they are the guns I still shoot.

I bought one from the mother which was a Browning design pump 12 gauge, that I think was manufactured just after World War I. It just has on it, Chicoppe Falls, so I call it Chic, and while it only shoots sometimes, it is the gun I take upland hunting when I want a challenge. As a kid I once shot at a rooster pheasant down a corn row sitting there, and when I ran out, I think I had 4 hen pheasants too which I did not see. The pattern on Chic is a bit large, but I cherish this old, oil, blackpowder, oil, sweat and smoke stained gun which cost me 17 dollars.

I think he charged me 40 bucks for a single shot shotgun, which kicks like hell, and has no name on it. The bore is pitted, but it never blew up, so it is a shooter.

The last one I remember is this Westernfield bolt action in 20 gauge. I have called it Hosen Sheissen, as I like saying the word as it is fun in a German accent, and it is profane.

It has a plastic trigger guard with broke so we used some E 6000 on it, and that fixed the broken guard which I just put back on this morning.

It is a light gun though, and while I loathe how ugly bolt actions are, I like this gun as I can hold it like a pistol. I deem to haul it around in the pick up on errands and shoot upland game, skunks, yotes or whatever with it, as the gun is compact, light and will fit under the seat.

This is a Mossberg manufacture and they really were not the best guns on their metal in the early days, but it does not look as bad as most Mossberg clubs, so I it has grown on me.
Beloved Uncle had a bolt action 410 that he shot turkeys in the head with. The old man had two of them and I hated them. the clip fell out of one when you shot and the other in this group, the front bead was gone, so I screwed in a brass screw, took the head off and there is the site. Those were heavier than Hosen Sheisssen, in I think those were Sears guns, and Sears had better quality from their manufacturer than the soft steel in Ward's products.

I still have to clean the 20 up, but that will get done in time, and who knows what I will be blasting while doing errands over at the Uncle's or by God's Grace our place, as of course rich people will be donating generously as it is the right thing to do.

https://www.answers.com/Q/What_is_the_age_of_wards_western_field_93M-210A_20_gauge_bolt_action
What is the age of wards western field 93M-210A 20 gauge bolt action? It is a Mossberg model 85 Made for Montgomery Ward. They were manufactured between 1940 and 1947. They are decent guns. solid ...


Nothing like a good war production gun for the elite few who could get them.

WESTERNFIELD BOLT ACTION 20 GAUGE MADE FOR MON... for sale


Blessed virgin, she will shoot 3 inch shells. Talk about a real John Olin humdinger. It was Olin who lengthened all those short shells out to make them magnums. That was when the American Government actually subsidized gun manufacturers to keep Americans armed, instead of Donald Trump gun banning.

Well anyway, nice part about this gun, is if I run out of ammo, I can use it to beat things to death. Kind of excited now, as I want to see if I can get some lead 2/s and buck to load her up and see what she will do........hmmm maybe some slugs, oh joy this could be a real pot gun better than the trade guns the Hudson Bay dumped on them miscreant Indians of the north.

Time to do some net surfin'.