To be the son he never had 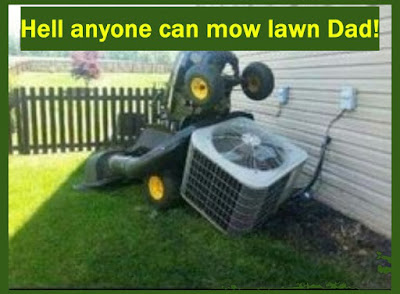 So not following the advice of one of the friends of the blog in dealing with relatives, I rolled the dice in figuring at least my name being an asset is better than being known as that bitch, was better for trying to get our place sold to us.

So we have been doing things things over there, and then the helpful son appeared in catharsis, unbeknownst to the daughter.

OK I was supposed to mow, but he instead decided he was going to mow. That was on top of he was suppose to take a tree down......he decided that he was not going to do that.

Instead he did get Uncle's pick up running, and drove it 30 miles away to a bar, drank some, then came to another bar and drank some more. Yes good times.

Near as I can figure out, son is trying to latch onto the place and replace the Uncle by sleeping in his bed and pissing on the lawn. He also wants to pretend to be Beloved Uncle as he figures he will take up the namesake torch.

Instead, this is what I have discovered.

Uncle has a kind of girlfriend, not his wife, that I call Aunt Betty to mock her. She was supposed to check on the place, but that got to be too much in the winter, so she dropped the key off to another distant relative, who I don't think checked on the place but twice last winter, as he likes to drink too.
These are the people the son latches onto as real operators.

So we went back over to mow the lawn, which took 4 1/2 hours, and Aunt Betty was there. I noticed that the lawnmower on the one blade was not cutting as apparently the son used the lawnmower blade as a sort of dirt tiller on a mound of dirt.
No matter, I discovered what he was farming as he put in one row of corn, with a string to mark it......in the grass. That ought to do really well on a hill, in the grass, and corn needs to be planted in a block of 4 rows to pollinate.

Son was just starting though. He announced he had sprayed. Then said the apple tree looked a little wilted, but that it "looked like it had a disease". Yes the disease was his spraying the apple tree as the top half is now without leaves. I have no idea how he did that. His father should be most pleased.

He asked me about the asparagas patch. I knew nothing of it, until I checked, and discovered he had mowed part of one patch off. Hence the revelation that he was mowing asparagas off.
TL kindly clipped the grass out of it.

So we return the next day as I want to see if I can get the blade off the mower. I notice that the storm door to the porch is open and immediately know what happened, as a southwest wind will catch that door and tear it off the house.
Upon checking, it was either Aunt Betty did not latch the door, or son failed to put the window down in the screen, and probably both as a 50 mph wind from the southwest acts like a bellows and blew the door open.
It tore the automatic closer off, so we went back and fixed that as good as it could be fixed.

In the meantime, the house is having a roof put on it. Yes that took like a month, and then the roofing guy decided to leave part of the roof not finished before moving out. I do not know if it is blackmail for full payment before finishing, but there the roof sits looking really bumpkin.

I informed the daughter of the events and she said she appreciated me fixing things and to just fill in the blanks.

So in review of 3 days of son on the scene.

He drank a 30 pack of beer. Drove 100 miles to do errands which was apparently focused on drinking beer and whiskey.
In the meantime, he used the mower to till the corn row in digging sod, so it will not mow.
He did not take down a tree that Uncle wanted down.
He did though hide the power cord I was using for things and wrapped it up tighter than Ivanka Kushner's pussy once was.
He also mowed the asparagas patch, sprayed the apple tree with herbicide, left the house open so the door got tore off, and failed to get the electric working in the shed that he was going to check out. (I found the problem and it will be fixed.)

I think if he had a week on the place, that it would have burned down. A month and I figure it would be a huge Grand Canyon hole.

The good news is, he is coming back to do more spraying. This time for bugs. When that event takes place I am not going  near the place for a week as I expect buzzards to be falling from the sky in the pesticide dump he is engaged in.

They are going to have a party over there this summer, but except for the grass, there does not seem to be a notice that the trim needs painting, the spider webs need to be washed off the house, and the porch cement looks like the insurance company would cancel coverage as it all needs being replaced. In other words, I would not be having a gathering where it looks like someone should be passing the hat for charity.

But there was beer, and what better way to say "I love you daddy" than coming back, destroying things like a teenager, taking the car and going out partying instead of working, and then leaving the place in worse shape than when you came.

I praise God in this, as it is not too hard to look competent to this bunch, and yes the Uncle and his daughter are noticing things I point out, in I'm the little girl who can be trusted to do things right and get things done. God has my stock rising, and while Uncle has never been the best to me, I certainly do not want the stress killing him.

It is a chess match though and God has given me more moves in doing the right thing, which will expose incompetence in others. I just would have liked the original deal we  offered in he we would purchase the place, fix things and he could stay there as long as he wanted, as we would help look after him.

Now though it is this mine field of catharsis in wearing daddy's shoes and putting on beloved Uncle's hat as we drink alcohol and pretend we are all the things we are not.

I am just thinking it will be a hot bitch at their gathering. Uncle can not take AC, so they will be sweaty ass miserable or give him pneumonia, as they shit his septic full. That was another gem of an event as 2 years ago the children were there, and ran so much water they collapsed the septic system.
I figure enough heat, bug spray and only the future knows what will be as they will probably burn up the renters wheat crop shooting fireworks off in it, that there should be some real entertainment.
I do not believe I will have to do much fixing, after this as they can hire it done, and while I will offer before, I figure son will be around and he certainly can burn the the buildings down as that seems about where he is headed in his kind of caretaking.

It comes down to it, the prayer probably should be, "God let me be the son he never had".