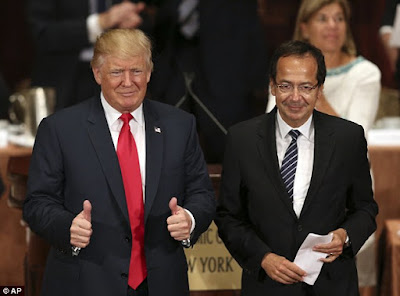 Back in the day, Bush fam, in a Karl Rove plan, created a money dump of hedge fund billionaires, who being created, were a sort of Ford Foundation for the GOP to launder money into their campaigns.

The financier who funded the original Pissgate Dossier was fag billionaire Jew, Paul Singer, who paid for it via William Kristol's son in law at the Washington Beacon, for Fusion GPS. This was for  who Paul Singer was backing in Marco Rubio, who was supposed to be Jeb Bush's Vice President neutralizing Canadian Ted Cruz.
This dossier would be enhanced by the Clinton campaign, and passed along to British MI6 in Theresa May and John Brennan conducting a coup against Donald Trump.

So Paul Singer is connected and above the law. What he knows in being a nation rapist is something that even Barack Obama would not touch as this is in the realm of the powers that be. What Singer is predicting, which is what has been predicted for sometime is that the global markets are going to correct and lose 40% of their value.

Speaking at the Aspen Ideas Festival, billionaire investor and Elliott Management founder, Paul Singer, warned that the global economy is heading toward a "significant market downturn" cautioning that "the global financial system is very much toward the risky end of the spectrum."
...
How bad would the crash be? According to the Elliott Management CEO, there will be a market "correction" of 30% to 40% when the downturn hits, although unlike Goldman - which gave a timeline of 12 months in which the next major market will materialize, Singer said he couldn’t predict the timing.


For this kind of crash, it will be deliberate and with reason. It will also have a terror attack of major proportions as on 9 11 or the 1929 crash to centralize money control as the Obama 2008 crash was engineered to establish in Goldman Sachs absorbed Jewish Lehman Brothers.

In this established reality, Greg Palast has part of his investigative book on the Mitt Romney dirty money deals, explains the foreplay of the 2008 crash. This is most important as the actor was John Paulson, who was one of Donald Trump's chief advisors and why Goldman Sachs got all the Trump tax breaks and you got robbed.

As Palast tells it, Paulson entered into a scheme with Goldman Sachs to sucker European banks again, as in the Dotcom bust of Bill Clinton, to buy bad US housing debt. In this Paulson bet for the market to crash and pocketed around 3 billion dollars.
Paulson seeded 200 million dollars in this scheme, Goldman Sachs lined up the banking marks and the rest is the crash which coordinated out of France. If you remember this scheme was tested in Iceland and then moved into London Finance, much to the delight of Europeans, before it looted the American Wall Street in Anglo American finance brought up short.
It was the Bank of London which paid off the Bank of Scotland's bad debt purchase from Goldman Sachs.

Interestingly, it was London Finance who installed Obama to bring the United States back under British control. In the end, it was Theresa May of MI6 who meddled in US elections to install Hillary Clinton to hide all the money laundering which was taking place.


In August 2007, billionaire John Paulson walked into Goldman Sachs, the investment bank, with a billion-dollar idea. Paulson’s brainstorm had all the elements that Goldman found enchanting: a bit of fraud, a bit of flimflam, and lots and lots of the ultimate drug: OPM-Other Peoples’ Money.
Paulson’s scheme was simple. Paulson, a much followed hotshot hedge-fund manager, would announce that he was betting big on the recovery of the U.S. housing market. He was willing to personally insure that billions of dollars of shaky subprime mortgages, like the ones dumped on Detroit, would never go into default.
Now, all Goldman had to do was line up some suckers with more money than sense, some big European banks that handled public pension funds, and get them to put up several billion dollars to join with Paulson to insure these shaky mortgages. Paulson, to lure the “marks” into betting the billions, would pretend to put $200 million into the investment himself.
But, in fact, Paulson would be betting against those very mortgages. Paulson himself was the secret beneficiary of the “insurance” on the mortgages. When the housing market went bust, Paulson collected from the duped banks and they didn’t even know it.
And Goldman would get a $15 million fee, or more, for lining up the sheep for the fleecing.
Goldman provided Paulson with a 29 year old kid, a French neophyte, to play the shill, making presentations to the European buyers with a fancy, 28-page “flip-book” about the wonderful, secure set of home mortgages the “clients” would be buying.
The young punk that Goldman put on the case texted a friend (in French – mais oui! -about the inscrutable “monstruosite”) while he was in the meeting right as Paulson was laying on the bullshit.


The reason all of this matters is history shows that one of the Bush fam hedge fund masters, was part of what set off the 2008 collapse which installed Obama.  Now the hedge fund master who destroyed Argentina's economy and blackmailed that nation, is stating a collapse is coming.

Singer though is apparently not the main conduit in this again, but he sees the same signs, and is attempting to protect his looted billions.

You will note that Donald Trump has blurted out that if he is not elected in 2020 a stock market crash will take place. That is what he knows and what he has been told. I though firmly believe that Donald Trump is played like the rest of the suckers and those behind this organized crash of the United States who are again in Europe and who have American traitors working for them again in finance, are the group who only knows the time line as Singer states.

https://www.bloomberg.com/news/articles/2019-06-15/trump-warns-of-epic-stock-market-crash-if-he-s-not-re-elected
Jun 15, 2019 · President Donald Trump, gearing up for the official start of his 2020 campaign, warned that the U.S. would face an epic stock market crash if he's not re-elected.

There are competing factions in this, in those supporting Donald Trump were promising him low gas prices to ward off a recession, but just as quickly these same oil barons, burned down the biggest east coast refinery, which just like in hurricane Obama to sift votes off the Romney fix of 2012 AD in the year of our Lord, spiked gas prices that year too.

Someone is moving hard to install Obama II and Donald Trump for all the promises made him for selling his soul and selling out MAGA, should be paying attention as his benefactors are working another deal.

Largest oil refinery on East Coast will close after fire

https://www.delawareonline.com/story/news/2019/06/26/largest-oil-refinery-east-coast-close-after-fire/1571598001/
The owner of the largest oil refinery complex on the East Coast is telling officials that it will close the facility after a fire last week set off explosions and damaged equipment there ...


The President should have trusted in Jesus, instead of Trump Trans.