Jared in the Back 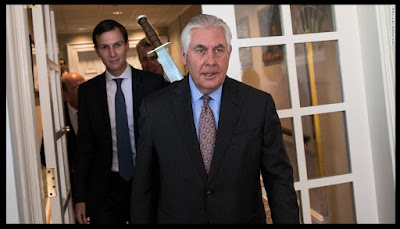 
There is a most interesting blitz moving against the move by Jared Kushner to loot the Middle East for his cronies, while having Europeans pay the bill, as there should rightly be, as the Kushner Peace Plan has nothing to do with peace, but is instead a corporate enslavement of Sunni Muslims who will be the wards of conglomeration camps, serving the Goldman Sachs of Wall Street.

In this, a well timed release of the testimony of Secretary of State Rex Tillerson appeared in all the Mockingbird media allied with the European financial Jewry and American banking who are being cut out of the Kushner sweetheart deal for his cronies. While Tillerson was more professional and accomplished in testifying before Congress, I am not interested in the salacious anecdotes, but instead in Lame Cherry exclusives two red flashing light moments were revealed.

The first is the State Department was hijacked by Jared Kushner, who was paying off his Jewish and Muslim financed cronies, doing end runs around State.
In reality I have no problem with a President appointing a weak Secretary of State, as President Richard Nixon did just that, so that his NSA chief, Henry Kissinger with Nixon could ignore State and accomplish the Nixon epic diplomacy which shaped the world for peace and stability in China and Russia.
The problem in this is Jared Kushner is not Henry Kissinger. Kushner is instead a smarmy little slum lord who works deals for his cronies. No nation can make diplomacy work in smarmy deals.

The second red flashing light was a most interesting tidbit that the Congressional Committee alerted Tillerson to. It had to do with Robert Mueller's investigation of Russiagate, and what appeared in a meeting between Kushner and Russian characters of note.
It was Kirill Dmitriev who is the state sanctioned investment banker for Russian assets. Where this gets interesting is his wife, is employed by Katerina Tikhonova, who is President Vladimir Putin's accomplished daughter, who unlike Ivanka Kushner does not make disasters for her father. 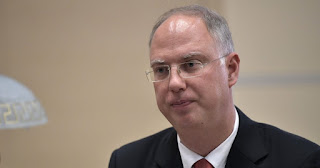 The former secretary of State also said he did not remember an incident recounted in special counsel Robert Mueller’s report on Russia’s interference in the 2016 election.
While Mueller did not establish a criminal conspiracy between Trump’s campaign and Russia, his lengthy report said Kushner gave Tillerson a copy of a plan for U.S.-Russian reconciliation that had been authored in part by Kirill Dmitriev, chief executive officer of Russia’s sovereign wealth fund.
“I don’t recall ever receiving any such report as described in the Mueller report or any other,” Tillerson said.


If you read the above closely, you find that Jared Kushner handed over the Russian peace proposal which he had received, but dropped the bombshell in this as a MUELLER COOPERATING WITNESS, which is what this blog informed all of you, that Kushner was selling people out for an immunity deal with Mueller, including his brother in law, Don jr, that Kushner had dropped this peace plan into Secretary of State Rex Tillerson's lap.

Rex Tillerson never received this report and Jared Kushner never gave it to Tillerson, so why would Kushner have told Robert Mueller that? 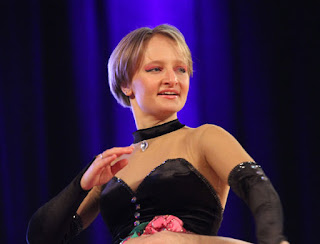 
The Russian side was represented by the CEO of the Russian Direct Investment Fund (RDIF), Kirill Dmitriev, whose wife serves as a deputy to Katerina Tikhonova. Ms Tikhonova has long been believed to be Vladimir Putin’s daughter.


The reason Jared Kushner was framing Rex Tillerson, as in Jared Kusher LIED to FBI agents, to the Special Prosecutor's Investigations, which is a felony, is always what was involved with Jared Kushner. Kushner via Eric Prince who was not indicted either as this was a cover up, had involved Steve Bannon and Michael Flynn in this meeting with a wealthy Muslim in al Nahyan.
Everything with this slum lord is about money. Kushner was forever trying to unload his disaster 666 skytower real estate. That is what the undercurrent of this was. Kushner was trying to "make peace" and the dividend would have been a billion Russian dollars buying 666.

Jared Kushner in order to hide from a federal investigation he was selling influence again, had to dump this interaction off on Rex Tillerson to implicate Tillerson, to divert attention from Kushner. Kusher desperately need to legitimize his influence pedaling and in order  to do it, he framed Tillerson as his patsy.


Prior to this, in December 2016, al-Nahyan had an informal meeting in New York City with Trump advisors. Steve Bannon, Michael Flynn and Jared Kushner were all present at the meeting. Just before this meeting, according to U.S. intelligence, Jared Kushner discussed the creation of an informal communications channel with Russia’s Ambassador to the U.S., Sergey Kislyak.


In all of this Robert Mueller is not any fool. As nothing came of this, it appears that Mueller knew he had been lied to, but there  was too much deep state involved with Erik Prince, and with Kushner having his immunity deal, the framing of Rex Tillerson was overlooked.

All of this creates a profile of Jared Kushner in he will prostitute his wife Ivanka, will sell his father in laws soul to save his, will pimp America and will frame anyone to weasel out of his crimes. Kushner gets away with all the does, because of those he advocates for in the less than 1% of the feudal few.

Rex Tillerson was in over his head as he thought he was implementing his policies, when he was there to serve the President, and never comprehended that he needed to keep track of Jared Kushner, who was given a free hand by the President to meddle in all issues.......not for Trump profits, as the Secretary was quite clear that Donald Trump never brought any of that up, but what Jared Kushner was always engaged in was paying off the powerful cronies whose backing he was indebted for, in helping to elect Donald Trump.

Or more to the point, it appears from the start that Jared Kushner was involved in this to sell the Trump name for his benefit and to make sure Hillary Clinton was elected.

Jared Kushner has worked a few deals. His largest apparently was Mexico which apparently involved Mexico keeping their borders open flooding the United States, but his entire persona has established all around that he cuts out powerful people, and that is why the Mideast plan is being sabotaged as it is not a peace plan at all, but instead is one to allow Tel Aviv to bomb Muslims while America bombs Iranian Shia Islamocommunists. That kind of smarmy sends the wrong message to Moscow and Vienna.
In the long run, this President can not overcome Kushner art of the graft. It is as smarmy as Obama's nefarious dealings.

Kushner had 666 bail out on his mind and had lined up a hedge fund manager for Russian billions flowing into the United States. 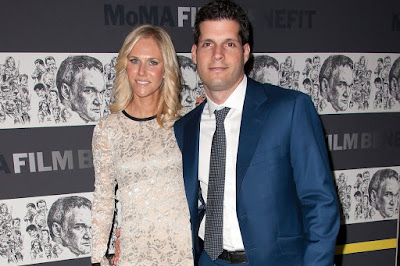 A friend of Jared Kushner developed a “reconciliation plan” for the U.S. and Russia with a Vladimir Putin deputy and gave it to President Donald Trump’s son-in-law, who circulated it to other top Trump officials.

The activities by Kushner and his friend, hedge fund manager Rick Gerson, do not appear to have been previously reported.

The national security adviser for the United Arab Emirates introduced Dmitriev to Gerson, the chairman of Falcon Edge Capital, in late November 2016. The two men then collaborated on a “short written reconciliation plan” for the U.S. and Russia that Dmitriev “implied had been cleared through Putin.”
Gerson gave the plan to Kushner, who then shared it with Bannon and Tillerson, Mueller said. Kushner told the special counsel that neither man followed up with him about the plan.
While Gerson had no formal role in Trump’s campaign or presidential transition, he helped arrange meetings between transition officials and former U.K. Prime Minister Tony Blair and a UAE delegation led by Crown Prince Mohammed Bin Zayed, Mueller said.