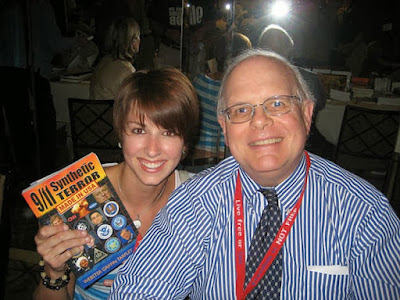 Webster Griffin Tarpley with a cherry on top

For me, when I settle something, and write the analysis here, it ends it. When I post that Webster Griffin Tarpley revealed on Jeff Rense, that the cartel was going to break the democratic party into a communist and socialist wing, and make the GOP a Green type party which will never be elected, so that Americans will be ruled like England and Europe between Nazi (National Socialism) Marxism (Communism) as the only choice for the Socio Conglomerates to loot nations and enslave peoples over, and it is coming true now almost 3 years before the prediction, I have no interest in it.


At this point, Nancy Pelosi is splitting the democratic party into socialists and communists, Hence her attack on CIA asset Alexandria Ocasio Cortez, and AOC rightly swinging back to fulfill her 30 pieces of silver payment.

https://news.yahoo.com/aoc-pelosi-singling-progressive-women-154525571.html
Representative Alexandria Ocasio-Cortez (D., N.Y.) accused House speaker Nancy Pelosi of "singling out" progressive women of color Wednesday, deepening the rift that has emerged between the caucus's young firebrands and leadership. "When these comments first started, I kind of thought that ...


Donald Trump joins in this to defend baby butcher Nancy Pelosi, as his 30 pieces of silver to save himself from Muellerness, is to head the Nazi party of America, which President Ivanka Trump will inherit with her billion dollar WinRed looting machine and spy network on your files to manipulate you, the way democrats herd their poor with ActBlue.

https://www.cnn.com/2019/07/12/politics/nancy-pelosi-donald-trump-alexandria-ocasio-cortez/index.html
Jul 12, 2019 · President Donald Trump, in a surprising turn, defended Democrat Nancy Pelosi amid her dispute with Rep. Alexandria Ocascio-Cortez and other freshman Democrats, saying the House speaker "is not a ...

It is the same rhetoric by this Somalian of Minnesota, Ihan Omar. She accuses Trump of being a racist, which Trump is not, and the Pelosi Homo Hannity world rails at Omar for stating facts about Political Jewry and American cannibal capitalists, being evils on this planet.


In this, even the cartel does trigger me, because their propaganda is appearing here, but what my triggers are the revulsion of Sean Homo Hannity lying to his redneck crowd who are Christian Conservatives, that Jews can not be questioned on their policies, without a Muslim being called an anti Semite.

The fact is that AOC and Omar are quite intelligent women. The rhetoric they speak with is in the 125 IQ range of understanding topics, which is way above that Oprah Obama sub 75 gibberish which was entirely bogus as "rationed death".

None of that means I agree with AOC or Omar, but I will not leave a Homo Hannity to skewer them as I am not a Christian Conservative who is going to accept Zbigniew Brzezinski's militant Islam any more than I will accept Greater Judea.

I will not accept the communists of Gaza who wield Philistines as a weapon for this political bastardization of the world any more than I accept Tel Aviv misusing those same Philistines for political aggression for Tel Aviv dominance of the Mideast and through a ruling power like the United States. This Tavistock and Stanford mindfucking is designed to bring emotional responses and get people to defend disgusting policies, in giving them only two abhorrent choices. I choose the American George Washington policy never spoken in NO FOREIGN ENTANGLEMENTS.

I have warned all of you that America is dead. The Republic was slaughtered when America industrialized in the European instigated Civil War and Abraham Lincoln created a Constitution of death, instead of liberty and justice for all. From there socialists Woodrow Wilson and Franklin Roosevelt exterminated the embers of America, for the same Nazi conglomerate rule, which Americans were being slaughtered for to destroy German Protestants, so that the United States would have a more perfect Hitler Union.

When I hear Sean Homo Hannity lie to people in stating the United States is not socialist, that is what triggers me as I detest liars. Alexandria Ocasio Cortez has bankrupting policies to enslave populations as that is what Green is, but she is not lying to people as she embraces what America is, Trump socialism on the way to complete Obama communism.

For the facts, Adolf Hitler apprehended French, Slavs, Jews to fund his German Reich in forced labor. Just because America has these Visa Vermin in Silicon Valley camps and Latin vermin on dairy farms or roof tops, stealing American jobs, does not make America not the same functioning Nazi corporate state. It is the same economy of debt by the elite, propped up by enslaved working masses.
Calling slavery the "DACA Dream" does not stop it from being slavery. It is vile as the National Socialist dream in Germany.

That is where this sand castle begins to dissolve into the waves of Truth, as the Truth moves this from the fraud of the shores of Homo Hannity and Nancy Pelosi, to the undersea facts that these fictional debate points can not stand the motion of examination. It is easy for the Molotov Mob to throw out the firebombs to the time it is required for this blog to once again post something to light a backfire, freeing people from this incessant inferno, but by that illumination, we see through the night, that our Flag was still there.

I reject both socialism and communism. I reject everything except the Republican form of Government based in Protestant Christian morals. All other systems are corrupt and destroy humanity while empowering and enriching but the feudal few, whether it is is Moscow, London, Peking, Berlin, Tokyo, Pyongyang, they are all the same police state system as operates out of Washington City, providing the people not the choice for life, but the universal or catholic choice of enslavement, extermination and exile. Nothing has changed since Joan of Arc was misused and abused by the same system and burned at the stake.

What is taking place is a diversion, and it is diverting you from expressing the facts, as you are lazy and emotional and will not invest the effort to speak the Truth, as you have been  trained to not think, but respond like Pavlov's dog to the sound, of whether you want to starve or eat poison.

I have no choice in this Godless system. My choice is outside the system in Jesus the Christ and I await His return or my going to Him. There is not any representation in what Homo Pelosi is offering.

Webster Griffin Tarpley was not a prophet. He simply was privy to the greatest revelation in America's 21st century and spoke it out loud, when he was not supposed to inform the world of what was coming.

I contemplate Homo Hannity's producer in Linda, the libido voice of the American primal cry. How she can sit there as Homo Hannity sodomizes those manipulated rednecks, is her trade off so she can go home to her nice house and child, is one of the Truths she does not address.
They all know they are throwing other parts of humanity to the wolves to devour so they can have their stations in life, but of course it is right because they are sucking the teat of of the American Nazicom state and calling it nectar and not poison.