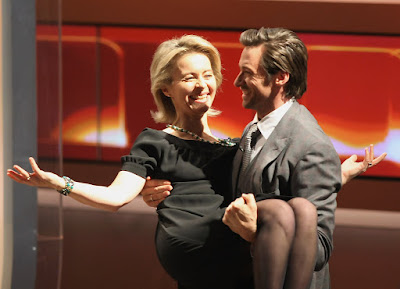 It fascinating that the disease of Europe in Angela Merkel, Emanuel Macron and Theresa May in their dinosaur death throws have paved the way for the perfect Hitler to arise to power in Europe.

Across Europe, in spite of Steve Bannon black Jesuit intrigue to remove Sebastian Kurz from power, the united elections were unanimous in supporting EPP or European Nationalists. whether Sebastian Kurz has smashed the European right and left for his Kurzlings of the Habsburgs in a new order, the People of Europe chose Nationalists. The problem was though as in England in Brexit or America in Donald Trump, the elite are not going to give up power, and when Manfred Weber was the popular choice to lead the European Super State, the disease of Europe re infected the European Parliament in Macron and Merkel overthrew the People's Elections and appointed the three most incompetent and corrupt Eurocrats to ever emerge.


President Emmanuel Macron of France didn’t like the look of Weber because of his political background. He preferred centre-Left Frans Timmermans, a former Dutch foreign minister.

However, various Right-wing governments, such as those in Poland, Hungary and Italy rejected Timmermans, whereupon Macron championed Ursula von der Leyen, a member of Mrs Merkel’s centre-Right party and Germany’s defence minister.
After much haggling, she was chosen, despite having been embroiled in a controversy over the awarding of contracts (she was eventually exonerated). From November 1, she will occupy the most important position in the EU.

Europe is about to be led by a group of compromise. No one wants who is in power, but the French and Germans destroyed the People's vote and chose, as the British correctly defined the issue, Ms von der Leyen brought Germany to ruin, so why not put her in complete control of Europe.

Joining von der Leyen, the German aristocrat, is someone who is not only incompetent, but a crook, in the French, Christine LeGarde. LaGarde as the British noted, has absolutely no understanding or ability dealing with banking or finance, but of course she was in charge of IMF laundering and while there laundered a great deal of Euros into her purse and into French pockets. 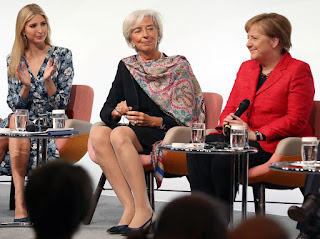 Christine Lagarde, who has run the International Monetary Fund since 2011, pocketing more than £3.6 million tax-free in the process, will become President of the European Central Bank.

This is a bizarre appointment. For one thing, she has been convicted of criminal negligence over a French corruption scandal, though I doubt this was of much concern to the panjandrums who selected her.


The last minstrel in this show, is Charles Michel. He really has no ability or accomplishments, other than following two incompetent skirts around the EU inner sanctum, but he is in favor as is LaGarde and von der Leyen in cementing a European dictatorship.

Charles Michel will give up the job of Belgium’s interim Prime Minister to fill the shoes of Donald Tusk as President of the European Council, a role co-ordinating member states.Michel is a close friend of Macron, which is cosy. He’s another arch-euro federalist who wants ‘ever closer union’


See that is what the answer to European National States is in Macron and Merkel, not giving the 10 Amendment Rights of America to European nations, but instead smashing them to oblivion in Europeans will not be ruled by Europeans, but by a coming dictator who is intelligent enough to seize this triad of power from these incompetents for their own.


Ursual von der Leyen will probably not complete her term, for the simple reason she should be indicted for criminal incompetence.


Fighter jets and helicopters that don’t fly, warships and submarines that cannot put out to sea, guns that miss the target when they get too hot, and a lack of everything from ammunition to underwear.
That, it is claimed, is the parlous state of the German Army under the tenure of the country’s Defence Minister and now President of the European Commission. 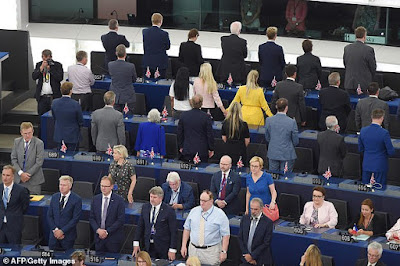 The same is the case with LeGrade, as the vaults of Europe will be empty in a month with her holding the keys to the kingdoms.

So in review of this, the British are being screwed over by their Queen in Brexit as she rules against the people. Donald Trump is running against MAGA and his voters. Europe is bitch slapping Europeans in appointing crooked despots to put chains on them. There is absolutely not any way in this kind of flux that any kind of governance can prevail as the people will not support this betrayal as they are going in a Nationalist direction.

As America has a despot in Donald Trump, England is bringing along buffoon bungling Boris to put the stick about, that leaves Europe with skirts in control, who are not able to keep control.

There arises a major economic meltdown which is coming. There arises a Muslim problem in Turkey and the Mideast or the Russians, Chinese and American decide to contest European union, and these skirts will fold, and with these disasters will arise a new Hitler with the sense to run this continent.

There is not any way these skirts have the ability or sense to manage the European Super State which Sebastian Kurz and the Habsburgs have fathered into Europe,  in control of Africa, and the management of Asia. What has taken place are the Darwin death throws of the survival of the unfittest in the last machinations and gasps of the dinosaurs of Franco German weakness. It was fitting that at Strasbourg this dying Europe was established for the crypt, as it is neither German nor French. It is the miry clay without the steel of bones to give this the feet to stand upon.

With the British yapping at the heels of this near extinct dinosaur of the ages, present a resounding bay, for a true native of Europe, a populist to accept the dictatorship provided for them, and which Europeans will gladly now embrace, considering they have been betrayed as the Americans and British have. 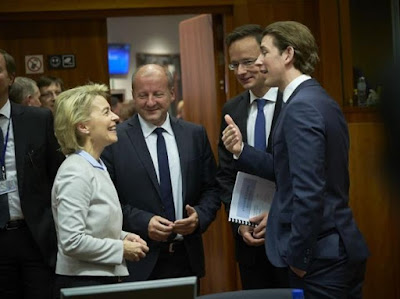