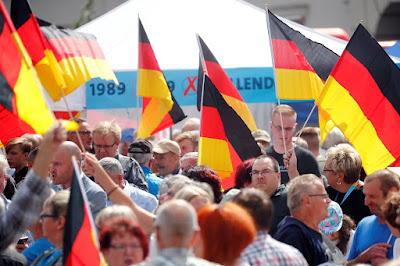 Life Liberty and the Pursuit of Happiness

It is always troubling when innocent people on the right are linked to the crimes of  those on the left. The Obama regime in the United States made a practice of this under the corrupt Attorney General's Eric Holder and Loretta Lynch, in infamous cases like George Zimmerman defending his life against murder by a violent Treyvon Martin, and Mr. Zimmerman became the police state target.
In Ferguson Missouri, even the police were targeted by the Obama regime, when a violent giant attempted to murder a police officer, the officer then defended himself and killed this attacker, but it was the officer who was scapegoated.
In both instances it was innocent people on the right, attacked by those on the left, and the people on the right were targets of the regime.

In a story concerning Germany and incidents there, a British journalist writing for NBC, housed a troubling screed about "the extremist right wing in Germany". What is interesting in this, is the Angela Merkel police state actually has statistics on Germans in the right wing to the PERSON, as they know the exact number.

What is troubling in this on many counts is the German police state is apparently psychologically profiling innocent people, and judging them as "violence prone". In 25,400 Germans who are loyal to Germany, want to protect their families, and like Aribus in defense of the Fatherland against Roman rapists of Germany women,  the Merkel police state has judged 12,7000 of these people who have not committed a crime as "violence oriented".


No data is provided in what the check list is, that condemns a German to police state surveillance, their having your name on file and an apparent constant tracking of the innocent German. This is most troubling in that Germans are being categorized as problems of the state, and in all the cases sited, there were out of 12,700 "violent Germans", only 2 instances of actual violence, against politicians who were producing policies which were getting Germans murdered and raped.
2 people out of 12,700 is not a category of "violence prone". This is an abuse of power and direct intimidation of innocent people, because there should be thousands of incidents if these people were violent and that is not the case in the least.

The smear in this is the Nazi's are named again in association with the right wing. A Nazi is a National Socialist. Socialists as the Lame Cherry first exposed in this propaganda and plagiarized by all is LEFT WING. The fact is in the Nazi realm, there were more terrorist and assassination attacks from the communists who the nazi was fighting against in defense of Germany. The Nazi's in their scuffles in Munich were fighting against large mobs of communists who were armed.

Even in this, the right wing is deemed a threat, because they have arms for self defense. This is perhaps one of the triggers as in the Clinton and Obama America, that if you are an American with a firearm, like apple pie and believe in Jesus, that lists you as a terrorist in never having committed an act of violence.

"Given the high affinity for carrying weapons in the far-right extremist spectrum, those numbers are extremely worrying," Interior Minister Horst Seehofer said in presenting the report. "The risk of an attack is high."


Over 25,000 armed Germans, and only 2 attacks. That is not a high risk group and the German interior is producing propaganda worse than Joseph Goebbels ever created.

What is of interest in this, is Germany has left wing groups like the American intelligence funded Southern Poverty Law Center, which monitors innocent Germans on the right. That is not something any free nation should allow. Yet this is common and a German of the East is as prone to being spied upon, as when the Soviet Union had those Germans behind the Iron Curtain. In that point, the Germans who suffered mass rape, murder and oppression under leftists for a generation, until liberate by Ronald Reagan, are the ones who are resisting the destruction of Germany and their being endangered by Merkel's socialist policies placing foreigners over Germans.

At the center of  this is the German AfD party which has 90 seats in Parliament and is a voice for German sovereignty and safety. The left demands a dictatorship and none of that is embraced by the people of Germany. Yet this strong voice is not welcome in a left mob rule democracy, where the state they have created is where a new breed of foreign slaves is imported for the open work camps, while Germans are taxed to their last pint of blood and if anything is left in Germany, they are allowed to be told how that may be invested or spent.

One amusing part in all of this leftist whining by Angela Merkel and her NGO spy groups, is that their rants do not match the actual data of the right in Germany being a threat. No greater proof of this is, than the German Police, who in the cases cited, always seem to have a suspect in a car being torched, but they never seem to make any arrests.


Though the numbers in the recent report haven’t changed much since last year, the right wing’s slant toward aggression has increased, according to Kahane, who said that she receives attacks daily on social media.
“It is becoming more aggressive because they don’t feel enough resistance by the population or by the government,” Kahane said.


The part about not being able to find people to arrest, speaks of the trend in Germany that the Police there have a natural affinity with Germans on the right, and have a sympathy for Germans who are being steamrolled by the Merkel state, and venting by taunting the trolls spying on them in social media, and are acting out in non violent ways of torching vehicles.
These same leftists will defend Muslims in Paris torching city blocks as a rightful political protest, but have a German light up a car of someone spying on them, and suddenly it is a violent, extreme terror event.

It is always the case that the extremists on the left are just "freedom fighters, revolutionaries and protestors", but never terrorists, but have one German go to Church and apply to own a firearm, and they are listed as "violent prone extremists".
There is a reason it is called the poison pen and assassination journalism, as the left engaged in abuse, torture and violence that keyboard, as they engineer laws to protect their crimes and make criminals out of the innocent.

It honestly appears that the German and European police forces are not in line with the established police state which in Germany, which this English American article does not reveal, is that the German intelligence and security services were the ones who infiltrated the German right and were the ones committing crimes and instigating violence to frame innocent Germans.
That is the greatest salvation in this for a free Europe.

The problem though in this as Donald Trump once again spews out his AltRight rhetoric of "go back where they came from" is for 3 years he has had nothing but open borders, expanded Visa vermin taking American jobs and promoting for conglomerates all the foreign slaves they can lash to the keyboard or lawnmower. Trump's rhetoric is misrepresenting the trust that Americans on the right have placed in him, as great as Angela Merkel and her NGO spy groups have betrayed Germans by placing them on watch lists and by gulag profiling criminalize Germans for loving the Fatherland.

Europe is now ripe for a dictator after Angela Merkel and Emanuel Macron overthrew the summer elections of 2019 and put into power two incompetent and corrupt women, negating the right wing vote across Europe.
Sebastian Kurz and Manfred Weber's cause was not helped by their attacking the right wing in Europe too. It does pose the reality though that Chancellor Kurz in this crumbling leftism will arise to Fuehrer status.

This infringement of rights of Germans or anyone on the right from France to the United States to not be spied upon by intelligence funded NGO's and then have police state propaganda generated to smear them with fake news that the data proves absolutely wrong, is something which there should be protection from. In Germany the Police are apparently doing what they can in, not being able to find anyone to arrest when resistance appears. That is commendable to the Police and it is what the German Citizen has until the conservatives restore order to Germany and Europe in the fundamentals of a free people who have the right to life, liberty to think and how to live their lives.