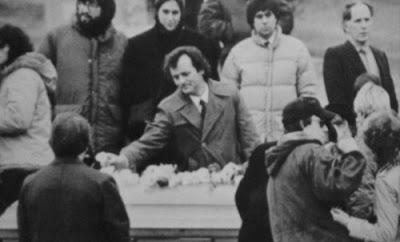 It was a good thing no one knew at a celebrity funeral
there would be Kodak moments to capture their grief.

This forensic psychological examination all began with an appearance of Dan Aykroyd on the Tonight Show with Johnny Carson, years ago, and having nothing better on, we were watching it.

As in most things, I start looking up people who I am watching and reading about them, which led me to the death of Mr. Ayrkoyd's friend, in John Belushi. For those who do not know the story, Belushi appeared in the Watergate era, on NBC's Saturday Night Live, with other caustic personalities like Chevy Chase, who was a mirror  image of David Letterman in a prick who  never wanted  to be known for comedy, but his thought provoking Tom Brokaw commentary on how to hate Christian Conservatives.
Chase's portrayal of President Gerald Ford, helped defeat him and for that the world got Jimmy Carter and is still nuclear terrorism bleeding over that with Iran.

Belushi was a binge doper. He hired trainers to keep him from doing dope, but there was something in Belushi which was hurting and he used dope to hide from that. The Miami Vice era though was coke across America which destroyed  some real talent like Jan Michael Vincent.
Belushi  indulged in booze, coke and what killed him  was a lethal addition of shooting up heroin. This analysis though is not about the death of John Belushi, but the story afterward, when Belushi's wife, hired Watergate's DIA propagandist in Bob  Woodward of the Washington Post to write a memoir on what happened to Belushi. That was  the cover story, but what it was, was the wife was looking to see if LAPD had a snitch shooting John Belushi up in order to get the goods on Belushi associates, at least that is what Woodward recounted.

Woodward is a professional. He is  also the faggot who befriends you at a party, gets you drunk, and then rapes you, so that you wake up the next morning feeling betrayed. That is what Woodward  does with people, in he puts on a persona of a friend, sympathetically wanting to hear the story you want to tell, just like Oprah patting a raped woman's leg on live television to get her to spill her guts and then in the final edit people are shocked that Woodward's books are filled with the facts of how degenerate everyone really is.

Belushi's circle of Aykroyd, Penny  Marshall,  Jack  Nicholson all trashed Woodward, and the complaint was that Woodward never wrote anything about how warm and nice a guy Belushi was. The reason was as Woodward and his assistant found and repeatedly tried in re interviews, was that everyone John Belushi was around, would start with a nice story and immediately shift to John Belushi doing dope and going nuts.
In the early days, people used to top Belushi off with booze at bars to get them to entertain them. He was banned from all the bars, but the pattern remained. It was summed up in Belushi's wife, stating that her husband  was fun, but doing drugs was fun too.
That is the problem in this, in all drinks think the are funny, and all dopers are having a good time and think  they have such wonderful warm friends, until the morgue arrives.
John Belushi was a nice guy with the crowd he was running with, because they were all high.

Two examples of John Belushi's  "friends" were those who appeared the night he died. Robin Williams appeared at the hotel, and snorted lines of coke with him, but did not like the woman Belushi was with as she seemed a crook. Robert DeNiro the profane big mouth ranting on Donald Trump, was there too, he too saw what a hole John Belushi was in, and he left.
Neither of these superstars did a thing for John Belushi. They did not call the police. The did not call an ambulance. They did not call Aykroyd or Mrs. Belushi for help, because that would rock the boat and ostracize them in the industry, where hating Christians and Conservatives was celebrated, because they never joined in the orgy.
See in Hollywood, everyone knows Corey Haim and Coryey Feldman are little boys being raped in that David Geffen  sphere at Disney of associate homosexuals and perverts, but no one does a thing. No one intervenes with a Charlie Sheen just like no one pulled the leash on James Dean. The Hollywood of the 80's was a coke line and raping the innocent, and everyone knew it, and everyone protected it. That is why Les  Moonves of  CBS a pervert never fired David  Letterman another letch, because they are all in the skin trade and no one ever asks what Hugh Grant after being arrested with a transvestite whore, why he was arrested by LAPD in who Grant offended and how much genital he had to suck to get back into the movie trade.

That was the world of John Belushi, where Hollywood cast people with little talent, who did comedy, into horrid roles that only actors should have taken. Robin Williams movies were never funny. They were soul rapes of misery, because he was miserable.John Belushi was never offered anything comedic, but instead was in movies which were boring as it required an actor to carry movies like that and Belushi was not an actor. He was a stand there for the punch line persona in a funny situation like Dan Aykroyd.
If you look at Saturday Night Live, the only creations of the original years who had any success were Bill Murray, because he did comedy. Murray carried Chevy Chase who was like Allan Alda of MASH in being unfunny. If there was anything amusing in the movies Chase was in, it was because like Caddy Shack, Bill  Murray, Rodney Dangerfield and Ted Knight were carrying the movie.
Murray though  had his own problems in being a  David Letterman cocktail crowd trailer.

It was in this background that the John Belushi movie, WIRED, by Bob  Woodward hit the silver screen, and was  immediately destroyed along with the actors in it, because Hollywood did not want their pervert secrets out that got John Belushi killed. Dan Aykroyd was the worst in getting people fired and black balling people. Aykroyd said he  was doing this for his friend, but psychologically he was in forensics  most likely feeling immense guilt in not saving his friend. Those close to Belushi had the excuse of Belushi was an  adult and they thought he was recovering, but they all felt guilt as they knew the industry they were  enabling to save and promote themselves made them apart of shooting up Belushi.
In having  only peripheral knowledge of Dan  Aykroyd, he has always by the company he keeps been a good guy. He fortunately escaped marrying that lunatic Carrie Fischer, and married Donna Dixon and   they raised  3 daughters. As one never hears any bad stories about this couple and their children are not wearing Pussy Hats in protesting Trump, it points to they are  normal people and an excuse can be made for Mr. Aykroyd in lashing out as he did  for his friend. The others though never changed a thing, including Saturday Night's Lorne Michaels who was more worried about what Woodward  was portraying him as and in this #NeverTrump era has allowed Alec Baldwin to look absolutely foolish in raging against Donald Trump. Enabling behavior which is destructive is what the entertainment industry does as the demo is Trump haters, so use up Alec Baldwin t o keep the show on the air.

The movie Wired is buried by Hollywood for their sins. It was a horrific film which was  too biting in it begins with Belushi in the morgue running away form his autopsy as a taxi driver takes him through is life in review as Bob Woodward interviews the dying comedian. Too poignant of story and too much a reminder of what really is Hollywood. The actors, writers and directors though are not to blame for Wired as they were trying to make a living just like everyone else in Hollywood who  is not Eddie Murphy coke sucking the life out of expense accounts while fucking a new  white girl in the back of a limo in his audition as Beverly Hills Cop upon fleeing the Buhwheat Plantation of Saturday Night Live.

The fact is that John Belushi's career was over when he died. He had zero parts and was dosing himself to end the reality he was in. Fortunately his brother Jim, arose to stardom and has produced some fine performances including his comedy show Jim.  He could have rolled  up  the streets and given up as John Belushi's kid  brother as an excuse, but he worked the system and he prevailed, because in most instances Jim Belushi was giving people what they expected in large comedic performances. John Wayne had to come to term with people wanted him as a cowboy, and Jim Belushi understood that is why people were paying money to see movies he was in, and that was to be entertained.

Dope is what got John Belushi because he was a stoner. People  who  are on stage are there to hide from who they are and to validate themselves in  the attention of others as that is their psychopathy, and it does kill from the little white pills of Elvis Presley to the dick up the ass that killed Brad Davis.

Bob Woodward's problem is he is that Mirror Mirror on the wall, seducing people to tell their stories, but in the end Woodward shows everyone the real person, and that is what infuriates those imprisoned by the words of his books.

I would that John Belushi was not a person was hiding in dope something that he could not measure up to. I would that Mr. Belushi had  been responsible and home as a married  man. I would that John Belushi had rolls generated for him which would have fulfilled his career. The formula of Tim Matheson as a straight man and John Belushi as the punch line  would have worked, but Hollywood in the coke and  cock era  of making movies, was not interested in writing comedies like Caddy  Shack.........and imagine if Tim Matheson had been cast instead of the lackluster Chevy Chase and if a roll could have been created equal to Bill Murray as an over the top golf club manager.

Give the star what they want, keep them addicted, and your big break might come as John Belushi is the nice guy who helps others. 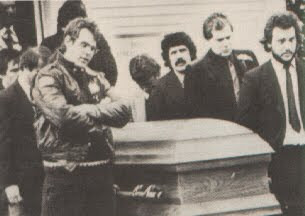 Kodak moments demand a pose with a casket.


Stoner, another Lame Cherry exclusive in matter anti matter as people live life in ways that catch up to them and do things in grief they never would repeat later.