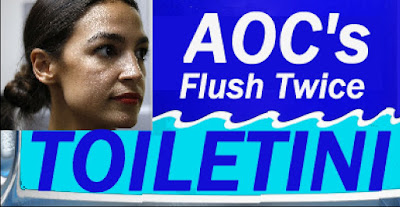 Look, it is no secret that I appreciate CIA asset Alexandria Ocasio Cortez, who was raised from the Kennedy ranks, funded by George Soros, an Obama girl, cuddling with Bernie Sanders to give a ditz label to Marxism, as she is doing a fine job, and I adore her for that. What I just can not figure out .....yes I can, but it is just a statement of consternation in why does Alexandria Ocasio Cortez hate Mexicans or that creatures from Latin and South America.


It all started with AOC plunging in among the wetbacks down on the border. There she ranted, raved and released statements that she was inspecting the place and not inspecting the place, as she informed the world that tanskins were drinking water out of the toilet bowl.

That kind of propaganda just begs satire and a CIA agent in the Edward Lansdale line would know this, as the analogy would be American  toilet water is cleaner than the water in Mexico and What else would you expect a stupid Mexican to do but drink from a shitter as they never saw one before in their third world shit holes.

Yes all of this was and is by Mockingbird design. Latins are not that stupid in they know these are communist agitators that AOC just so happened to interview, as the story was set up, and every Mexican knows it. It is a point though as the Lame Cherry satire kicks in, that now we have Alexandria Ocasio Cortez promoting toilet water as the fountain of freedom for criminal invaders in that is what they are drinking in the AOC toiletini.

Alexandria Ocasio Cortez and the Toiletini 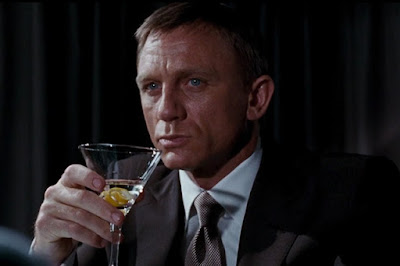 This tastes just like the Toiletinis down in Texas.....

That is what the point in this is, as AOC knows absolutely  that once she made it a story that Mexicans were drinking toilet water, that some clever prankster is going to start dipping water out of toilets, filling it into used bottle water containers, and start handing them out to these beaners as a joke.
They will laugh and laugh as the sweaty beaners in their hoodies on 500 degree days quench their thirst in toilet water. Considering what they drink for sewage in Mexico that would kill a parasite, the Mexican gut will not even belch from it, but that is what AOC has set up to begin as pranks across America.

You have to understand Latins though, in there is a Nazi pecking order like in Asia, like Adolf Hitler had in Europe, like Americans all think southerners are rednecks and Californians are asstards. There is just prejudice and AOC is Jewrican, as she needs a step up from Puerto Rico, as they are one step below on the food chain to the top ranked Cubans. At the bottom are Haitians and Trinidadians in being darkies, but AOC has all of this knowledge as she was raised in it. You want to get a Latin testy, just start calling them by a different group, well except the beaners as they want to move up on the food chain.

So that is what will appear, hell it probably will be Cubans and Ricans who will start bottling Toilitini's for their Latino underlings and get the biggest laugh of all, as AOC is the source of this, and it goes to the foundation of this in why does AOC hate Latin Americans?

Yes she is prejudiced as they all are, but I don't think AOC is really a hater. Instead this is all about the balkanization of groups. Donald Trump gets the Negroids, and AOC is out making a fracture in the ethic groups, driving the Cubans harder into Trump  Socialism and a good portion of these Latins once they start reading that AOC started a reality of all the bottle water the Mexicans are being served from Puerto Ricans is toilet water. 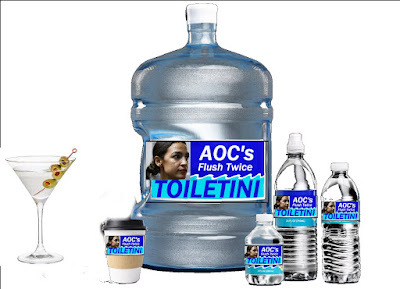 AOC knows that none of these Mexicans are going to harmed, as God knows I have featured my observations here in watching disgusting Guatemalans rolling boogers out of their noses and dropping them on the floor as they shop. Then there are the drooling Mexican bambino rolling around on the floor as they cover toys with spit. Hell I even saw one enterprising Latin letting their kid play at the top of a two story staircase. I told the kid to vam, but it was obvious they hoped the kid would get killed so they could make money off of it.
So drinking water out of a toilet, considering Mexicans fertilize your spinach with their excrement, is a step up, as there is less bacteria in an American toilet than in a Mexican taco, and that includes their eataries in America, as Mexicans do not wash their hands unless constantly supervised and you do know they do not use toilet paper.

So Alexandria Ocasio Cortez and some Jesuit sponsored Latin communist agitators decided to create propaganda of beaners doing the big gulp in the toilet bowl, knowing other Latins who hate this ilk will start handing out AOC Toiletini's as a practical joke.

So coming to a Mexican near you will be AOC's Flush Twice Toiletini. I think it is a bit far, but then I am not the one making up stories and giving people ideas on how to retaliate on the lesser order. 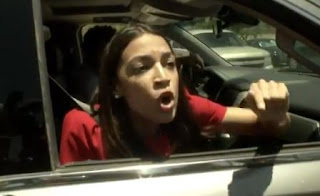 Look amigo, this is racist in I want my toilet bowl water like the people down on the border!!!