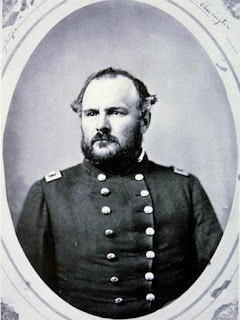 
In reading the troubling propaganda of SC Gwynne in his racist condemnation of Americans during the Indian terror wars, three blatant realities appear, in namely Christian Protestants were to blame for being Americans. George Custer was a failure, and Colonel Chivington of the Sand Creek Massacre led nothing but drunks and scoundrels.

In examining the realities of the Fighting Parson, who was of the mode of the Methodists who used to beat the hell out of thugs and bullies in settlements who tried to beat the hell out of pastors, a history of the Battle of Sand Creek, which reveals not a massacre, but instead an actual battle between armed terrorists and Americans under the command of Colonel Chivington.

In the following account facts begin emerging in the detractors of Colonel Chivington created many myths which the Indian Lovers exploited. Situations as the Indians were under truce. The Indians were flying an American flag to show they were not hostile. Women and children were killed.
To counter this,  two glaring facts emerged in the Cheyenne fired on the Americans first. Second, after the battle, fresh scalps of women and children were located in the camp. In other words, the terrorists in the camp, under truce, had been raping, torturing and murdering American women and children.

No matter the propaganda, these were hostiles as all camps were. Indians lied, had little control over their people and lied constantly, and the fact was these were terrorists who if they had gotten the upper hand against Colonel Chivington's troops, would have scalped, tortured and murdered all of them too.

In military review of the Colonel's battle plan, he was very astute. In fact, considering this was 1864, during the Civil War, and the methods of Indian warfare had not been learned in leaders like General George Custer, which began against terrorist Cheyenne at the Washita, Chivington had profound insight into how to fight mobile terrorists.

The Colonel's first order was to deprive the Indians of their most lethal weapon, and that was mobility. He began rounding up the horses before engaging the Indians. In Chivington's order of battle, he was going to acquire the  horses, and then with the Indians pinned down, negotiate with them to surrender.
Those facts are not ever mentioned in the  propaganda of liberals who always blame Americans first and last and degrade them.

What took place though was a number of horses panicked and ran into the Cheyenne camp. At this point the troops followed into the camp and this is where the battle began, as the Indians opened fire on the Americans first.

Chivington on seeing part of his command was being pressed, ordered a general advance to relieve them. One must remember that these men of Colorado, had suffered under the terrorism of Indians  in it was a real event which repeated often. Babies had their heads bashed in. Women  were gang raped and either murdered or made slaves. Men were always tortured for hours and murdered, as homes were burned, and all possessions looted or destroyed.

The troops were facing 400 armed terrorists who were supplemented by 100 women who were armed and firing at the Soldiers too. This was fixed position and it was not an easy task for the troops to advance on or to deal with this many armed hostiles.
This is where the depriving the Indians of mobility revealed it's genius and military prowess, because if the Indians had become mounted, it would have changed the entire order of battle.
As the battle ensued 100 armed terrorists set up a skirmish line to stop the troops advance and to provide cover for the fleeing women, children and supplies.

The troops actually were stopped here at Sand Creek. It was at this juncture of the battle that Colonel  Chivington having brought up howitzers, opened fire to repulse the Indian line. The first salvo breached the Indian lines, and the Americans pressed the attack again. This time following up with troops outflanking the Indian lines.


At this point, the Indians were in retreat, but they had prepared for the Americans. to a fall back position, almost a mile away with rifle pits and hiding behind the banks of Sand Creek.
It was here in this cover that hand to hand fighting took place. It was this location by the accounts that the squaws using arms attacking the troops were killed in combat.

The battle lines stretched out for 3 miles and continued hot for the entire day. Colonel Chivington noting the situation, darkness approaching and suspecting other terrorists from other camps would arrive to counter attack, called for a fall back to the Cheyenne camp as a defensible position.

It was now 4 o'clock in the afternoon. The Americans has been engaged since dawn, had fought hard all day (remarkable for drunks as CS Gwynne slandered them as), and under stiff fire, returned to the camp.

Here Chivington revealed his astute command of command, in he formed a defensive box square, placed his animals on the inside, fed his men a good supper, and allowed them to sleep.
It is interesting here that CS Gwynne in his diatribes can not brag enough about his favorite soldier in Ranald McKenzie who made the worst mistakes in combat against the Comanche, and should have faced court martial, once lost 3000 horses under his command, but Chivington prosecuting an astute battle for most of a day, is degraded as a massacre and his men of course were low lifes and drunks, based on the charges of people who had it out for Colonel  Chivington.

As the last paragraph proves, a surgeon identified in autopsy the scalps of numerous American women and children in the Cheyenne camp. These Cheyenne were terrorists, and no truce would have protected them. The fact is the Indians made truce to create base camps to slaughter Americans from, gain gifts and then break the truce once spring came and the ponies could carry the terrorists to the settlements again.

By the above facts, Colonel Chivington and his Colorado troops were humans in combat against terrorists, that they wanted revenge against and they prosecuted that revenge to it's fullest in brisk combat.  Gwynne quotes Kit Carson speaking of innocent women and children.  The west was full of half stories of massacres, which were not massacres which an ignorant comment would be created to condemn Americans. The facts prove otherwise in Colonel Chivington acted completely responsibly and his command was in combat prosecuting a battle against terrorists, who if they had gotten the upper hand, would have butchered these Americans too, as they would later join in the butchery of the 7th Cavalry at Little Big Horn.

There was not a massacre at Sand Creek. It was combat and the reason it was so successful was due to the fact that Colonel Chivington had  produced a successful battle plan, that even when things went wrong, he had prepared for those circumstances perfectly.


The Fighting Parson belongs in the ranks of American heroes. His routing of this Cheyenne camp saved lives, American lives of women and children. Whether it was half a dozen of  one hundred until the Cheyenne were subdued 15 years later, each life was truly innocent and worth the sanctioned attack by the Chivington troops.

The people of Denver and the west celebrated what the Chivington column accomplished. It should be celebrated, or every action Americans engaged in from the Beirut Bombing of Marines onward has been the same murder which Colonel Chivington was wrongfully accused of. These were enemy combatants. These were Indian terrorists who some reports state that there was not an American flag or a flag of truce flying.

Too many Americans of the West have been slandered by those liberals of the east. These Americans in Colorado were protecting Americans and saved American lives, by routing terrorists in their base of operations.