The Mother that Keeps on Giving 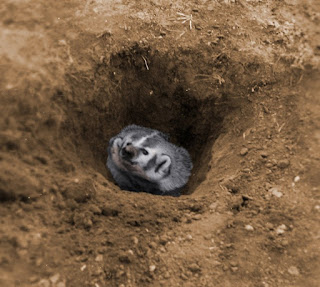 So TL and I went over and planted a peony on the space between the parent's stone and the sisters. Loaded 4 wheel barrel loads of dirt, which was wet and heavy as hell too, as there was allot of settling on the grave since November.

It has been a wet bitch here, and that cemetery is surrounded by flat wet farm land, real clay, so the dirt fill was heavy.


Thing is TL says to me, 'You smell that?" Yeah I smelled it, smelled allot of dead coon, dead skunk, dead critter this spring, including dead goat and dead baby calf. This though did not have the edge on it, not as sour as pig gets when it gets ripe, like a coon. That is a raccoon.

I looked over the fence. I looked around the shitter shed and tool shed combo, but I kept coming back to the area of that grave as the source, even with the wind blowing.

Thing is, as TL said, "The smell was gone when we put that fill on the grave.".

Yeah that was a fact of it, so it would seem that the vault the casket was in, probably gave way on the southwest corner. There was another grave out there that settled down in a burial after the mother died, so I was wondering if the cement things actually broke in the cold or who  the hell knows in the bloulder size dirt clods a backhoe dumps in when it is cold and they want to get home.

Not like I am going to dig the mother up, or raise hell about it. Shit happens and I doubt any retirement money could be made. After all we got a 60 dollar maple tree from them for using their service and I will be planting that in the front yard as it is starting to leaf out. We got the green maple, but everyone else wanted the red maple which goes for 80 bucks.  As TL said though, those red maples just get on your nerves as they are always red.
Sort of like the mother.

So that was our memorial day, and a hell of a last memory of that woman in probably smelling her methane decomposition wafting up heavy on a windy say. Odd that the buzzard were not circles as they got good noses and show up like vultures for a snack.

So if you want to know what a dead person smells like, no not a musty mummy, but a real one, it is not as heavy as a coon, not as sharp as pig and not as earthy as a goat. Really not that bad when you have smelled some of the ripe ones I have.
Used to watch the rendering truck guy bounce around on them dead holsteins and hampshires like they were rubber. One job I hope to never have to do, as I got the good one in burying the dead to put the stink seal on the graves as the grave diggers and vault makers fucked up.

Always get more surprises than I care to, not the ones I want like big donations.

Just have to monitor it, and hope the critters do not get to digging as that will be kind of sharp proof.