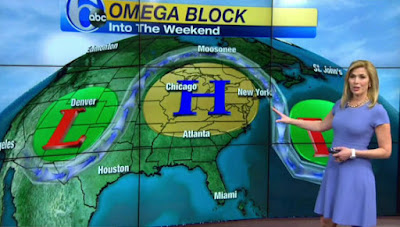 
The Weather Mods are implementing the perfect year long storm against American agriculture. It began last October with crop destroying blizzards, avalanche snows and cold all winter, massive spring flooding, summer deluges and now the next to last phase in the OMEGA BLOCK is being generated to bring a drought to the United States.

https://en.wikipedia.org/wiki/Block_(meteorology)
Block (meteorology) They are also known as blocking highs or blocking anticyclones. These blocks can remain in place for several days or even weeks, causing the areas affected by them to have the same kind of weather for an extended period of time (e.g. precipitation for some areas, clear skies for others).

https://www.weather.gov/mkx/omega-block-041616
Thank You, Omega Block Weather Pattern! This fine weather is a result of a blocking weather pattern called an "Omega Block". This is nothing new to meteorologists, kind of meteorology 101 stuff. It is one of the many types of weather patterns that can set up and be stubborn to move. Sometimes they bring us great weather, sometimes not (Colorado will see the latter).


See the crops are 2 weeks behind in growth. It was first too cold and wet, and it has now been humid and wet, which produces incomplete root structures on row crops. Short roots, means the corn and beans, will not be able to withstand high heat and no rain, and the crops will set back another two weeks, which do not burn off.

This is a critical time as the soybeans are being sprayed for weeds with Round Up and aphids. The plants are being burned like a sunburn from the chemicals and need moisture to regrow the burned off leaves from this chemical burn. 'The corn is entering the "shoot" phase of growth, which is the central spike of corn appearing before it tassels. This is one of the most critical times in corn as what follows is the production of corn. No roots, great stress and each day of dry weather reduces crop production.

America is being super heated with humidity by HAARP this week, which made the states be a huge greenhouse. The problem in all of this is, is that while the wheat harvest is about complete in Kansas, it is moving north, meaning a great deal of the wheat is in milk stage or immature.  Put a grape into a fry pan and you will see something which will just dehydrate to nothing. Wheat facing this kind of high heat and dry weather, will have reduced yields in chaff produced instead of grain.

This is a brilliant design for shattering American agriculture. What is happening is numbers of acres were not planted in the promise of disaster payments. Still others which were planted, had the farmers being suckered by all the rain that they would continue spraying chemicals for the conglomerates as the Farm Bill promised 85% payments on crop production, whether one was produced or not. The idea in this by the Weather Mods is to produce a crop so that payments will not have to be made, bankrupting farmers or so placing them in financial jeopardy that next year they will be carrying debt to wipe them out.

I am watching the idiots here spending hundreds of thousands of dollars putting in tile drains to their wet fields. The problem is this is CLAY. Yes it is wet this year, but in dry years, it holds moisture for crops. The problem is that when clay is deprived of moisture, it turns into land like a clay pot with huge cracks in it. These morons are destroying themselves as I would be very dry weather is coming again.

For now the Omega block will produce this effect and it will again reduce crop yields. The grains all need rain and that is being shut off. As every catastrophic event has taken place since last October, it is reasonable to conclude the final kill shot will take place in these immature crops will all be frozen early, ending all of this as was planned out over a year ago.

As of this time, my lovely heirloom corn is dealing well with this weather, better than frankenfood. My variety is chugging along, but I need the crop as you evil spiritual bastards sent the vibes to have my patch eaten last year.

But it all works out, as the worst thing could be happening now as it has been happening for a year, and evil directed at me is going national. It is though something that large comforting breasts will not even soothe the savage weather. 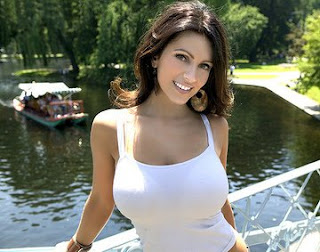