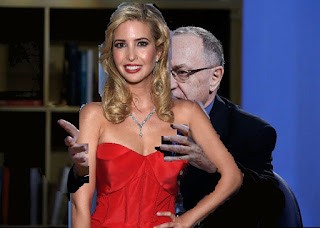 I simply do not understand the protests of professor Allan Derschowitz in claiming he does not enjoy raping children, because in his political sphere, the molestation of children is the reason homosexual rights were championed as queers are a stepping stone to legalized child rape.

Derschowitz was a proud voter of Birther Hussein Obama, whose memoirs spoke of Obama getting drunk as a child with Uncle Frank Davis Marshall, who sat around with Barry in urine soaked underwear as the poetry recorded. Uncle Frank and his white wife, typed up sex books about raping children.

That is why I do not understand this protest by the professor as this is the house he built by who he promoted and supported.

I recall the professor at the OJ Simpson trial, where the corpse of Nichole Brown was molested on the stand in she was tramp, and what they did to the Jewish Goldman family in the memory of Ron was worse than what the Nazi's did in work camps. Then there was the obliteration of justice as Dershchowitz helped create a bizarre story that Latin dope gangs were behind this all and somehow the victims were responsible for all of this murder.
So for Allan Derschowitz to complain about shyster lawyers on paydays, and lying about things in and out of court, the professor was joined at the hip in smearing people to get OJ Simpson off. It just does not make sense why the tactics that Derschowitz condoned are now somehow a bad thing now that he is on the receiving end.


One of the figures at the heart of the Epstein imbroglio is Virginia Roberts Giuffre, whom I have never met. Four years ago, she was ‘pressured’ – her word – by her lawyers into making false accusations against me: namely, that I had underage sex with her. They expected a big payday, but I was able to prove from my travel records that I could not have been on the Caribbean island, New Mexico ranch or other places where she perjuriously claimed to have met me. She also claimed to have met Al and Tipper Gore, as well as Bill Clinton, on the island, but Secret Service and other records proved she had made up these stories as well. She also made up stories about having underage sex with prominent political leaders – senators, ambassadors, prime ministers and other heads of state – but her own employment records prove conclusively that she was well above the age of consent when she claimed to have met these two men.


The professor also in his defense plays the Jew card. Considering again  what was done to the Jewish Goldman family by Allan Derschowitz is puzzling, and as puzzling as Derschowitz hiding behind Jewry when it was a Jew in Jeffrey Epstein and a Jew in Allan Derschowitz, who were linked to pedophile activities.

Court rooms are for sorting for the Truth, and while Mr. Derschowitz does a lawyers job in covering up the facts by claiming his accusers are liars and his witch hunt is about his defense of Donald Trump, whose son in law and daughter are Jews, but the other attorneys are pointing out that what Mr. Dershcowitz is denying things. other areas he is not denying, and in other areas claiming he only got naked once with a 50 year old masseuse, has holes in it, because Jeffrey Epstein only had people under 20 years old around, and there is no record of this mysterious eastern European masseuse.
When you are claiming being a victim, your story had not better be as unbelievable as those you are accusing of lying.

I am reminded in all of this in patterns. Enough of these cases of child rape have appeared, in the Franklin Scandal out of Omaha Nebraska, that there is psychological evidence that these raped children were drugged and given false memories. This all appears deliberate for the reason that the notable people raping children, could upon being accused have an Allan Derschowitz blamed who was not there, but the child was implanted that he was, so therefore the pedophile group would be protected as the accusers would be discredited.
In this Allan Derschowitz is not someone who lives in a bubble. He knows of MKULTRA and Franklin, but he chooses instead to smear the "dark recesses of the internet' which carry conspiracies. The very thing he is castigating is the very thing which is his salvation, but for some reason Allan Derschowitz has chosen to not only go after the fringe media, but the children who were raped, in attacking them in the same smear that Nichole Brown and Ron Goldman were character raped from the grave.

The very assemblage which Allan Derschowitz resides in his affluence is the host which protected and promoted Jeffrey Epstein. Epstein to be engaged in what he was doing and not be in prison, means the CIA and Mosaad were cooperating in the sex blackmail ring that Epstein was profiting from.
This is one of those Holocaust Realities in Jews can prey on other races, move dope into America from Panama, murder people, and it is all to be ignored as the victim Jew can not be held responsible. That is where Allan Derschowitz ran to first in being a Jew, in anti semite sites were carrying stories about him with Jew nosed characters.
For the reality, we know from Hutatree that the FBI and BATFE stated they had every group in American infiltrated. We know that one of the chief propagandists for the Nazis was working for the FBI. So is the Nazi media which is publishing fabricated stories, more of a cover for a Jew named Allan Derschowitz so that Mosaad and the Sayum Jeffrey Epstein will appear the innocents too?

All of this stinks of a far ranging intelligence operation, which is still in process. Allan Derschowitz though funded the pedophile movement in America which was nurtured by the deviant sexual promotion of Barack Obama. He was involved across the board as all of this is interconnected, and more to the point, he was associating with Jeffrey Epstein for years who is a known pedophile. Allan Derschowitz for all of his claims is not stating how he did not notice children dressed to the porn were always with his pedo friend. Allan Derschowitz writes to have us believe him, but how are we to believe that he did not notice a dirty old lounge lizard Jew named Jeffrey Epstein was a creepy, disgusting, pervert who always had sexually dressed children around him.

What did Derschowitz think they were doing there? Mow the lawn in crotch crawler shorts?


Allan Derschowitz like Jeffrey Epstein are two of the eminent minds in Jewry and in this world. There is not any way that Allan  Derschowitz in his calls of innocence, that he does not as a lawyer understand that his appeals are taking attention from the Epstein saga and who in the intelligence communities were behind this.

His closing appeal is that the New  Yorker magazine will only publish if they have 3 sources and then obfuscates in stating his two accusers were liars. Now that the New Yorker has the Derschowitz time line, it would appear that there are three other sources with stories about him which do stand the test.
Yes it seems certain that children were implanted with false memories to provide Epstein and his perverts with cover, which Derschowitz is the mouthpiece for in his defense. What happens though when witnesses appear placing Derschowitz at Pedoland when he was there.

Perhaps somewhere in the dead souls pool, the souls of Ron Goldman and Nichole Brown want their pound of flesh for what Allan  Derschowitz was joined in against them. How much will another religion not Jewry, but karma begins manifesting the secrets, because how innocent can you be when you are friends with a pedophile working for blackmail and murder intelligence agencies.

Allan Derschowitz would not have this problem if he had been at Synagogue or home reading the Torah, instead of out with Jeffrey Epstein.